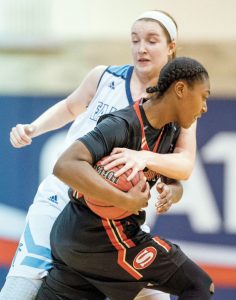 SALISBURY — No one had seen Salisbury’s girls play like this. At least, not this season.

The third-seeded Hornets played close to a perfect first quarter and shell-shocked second-seeded West Rowan, in a matchup of unbeaten teams on Friday.

The final score was a bit misleading, as West got 3-pointers in the closing seconds from Mary Sobataka and Abigail Wilson to trim a 21-point deficit to 15.

Freshman Rachel McCullough swished two 3-pointers for the third-seeded Hornets (9-0) in the first quarter. Her second one made it 19-5.

“We played extremely well in that first quarter with a lot of different people contributing,” Salisbury coach Lakai Brice said. “That’s the best we’ve played this year. The game plan was to get up on their guards, to put pressure on them and to take away their 3-pointers. The girls executed very well.”

West’s 3-point shooting is just one component of a high-powered offense. The other facet is inside power with the high-scoring 5-foot-10 Wilson, who gets help from 6-footer Whitley Arnott, a rugged rebounder.

Salisbury’ 6-footer Bryanna Troutman blocked two early shots to set the tone and limited Wilson, who has been routinely scoring 25 points per game, to four points in the first half.

“From the jump, we played hard tonight,” said Troutman, who has signed with Wingate. “This was a game we really wanted to win. Abigail is a big part of their offense, so stopping her was what I was focused on.”

Junior guard Anayia Fulson, who finished with 14 points, carried the Hornets in the second quarter. She knocked down three 3-pointers in the period and Salisbury led at halftime, 39-19.

“We didn’t play our game in the first half,” Wilson said. “They came out attacking. We didn’t.”

Salisbury’s shot selection got a little out of whack in the third quarter, and Wilson got untracked by roaming out of the post and catching the ball 15 feet from the hoop. She’s a good enough shooter to drill  every open look, and she piled up 12 points in the third quarter. West (10-1) outscored the Hornets 18-6 in that quarter and crept back within 45-37.

“Good teams will make runs,” Brice said. “We weren’t surprised they made one. We went flat for a little while, but then we got it back.”

It looked like Salisbury might stagger under the stress of West’s Wilson-fueled comeback, but McCullough got a friendly bounce on a 3-pointer from the left wing. It plopped through the rim to push the lead back to 11. That might have been the game’s key shot.

After Ja’kiya Brown fought for a stick-back and Troutman went coast-to-coast twice, Salisbury’s lead was 54-42.

“Bryanna had a really strong game, ran the floor hard and controlled the game when Fulson had to sit down with four fouls,” Brice said.

The versatile Troutman did what she always does statistically — 15 points, eight rebounds, six steals and five assists.

The Hornets ended any remaining suspense with sharp teamwork — Troutman to freshman Jaleiah Gibson for a layup, and then Brown to a flying Chantal Robinson for a layup and a 58-42 lead with four minutes left. That one brought SHS fans to their feet.

Robinson, who played for West in recent seasons, had her best game for her new team, contributing nine points, six rebounds and tireless defense.

“Chantal gave us so much energy,” Brice said. “And I was really proud of our freshmen for coming through in a big game. McCullough had 14 points, and Gibson had eight points and five rebounds. We’re a much deeper team than we were last year.”

Wilson scored 19 in the second half to finish with 23.  Sobataka, who gave West its only lead of the night with a 3-pointer for a 3-2 lead, scored 11. Taylor Poole and Arnott scored seven each.

Salisbury moves on to a second straight showdown, this one against top-seeded Carson (13-0) for the championship, tonight at 6 o’clock.

Carson is the defending champ, beating South Rowan for the title last December.

Brice led the Hornets to a victory in the 2016 championship game against Carson. Salisbury also beat Carson in 2010 and 2011 finals.