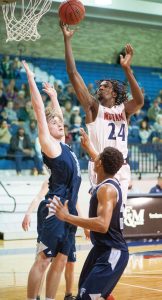 Gurley has won — and lost — emotional state championship games during his 22 seasons at West. He’s sailing in uncharted waters at the helm of a team that is 0-11, after a heart-pounding and ultimately, heart-breaking, 64-62 loss to East Rowan on Friday.

“I’m sure people think I’m miserable and disappointed right now,” said Gurley, who has logged 404 wins in Mount Ulla. “But the opposite of that is the case. I’m enjoying coaching the guys I’ve got right now. They’ve got courage. They’ve got toughness. Sure there are things we’ve got to fix, but I know we’re getting better.”

Watching your team get better is about all you can ask for as a coach.

“There were times today when nothing was going our way,” Misenheimer said. “It was a game that we could have easily given away, but we found a way to win it.”

Zack Brawley poured in a career-high 25 points for the Falcons.  Payne Stolsworth scored 13.

Elton Hooper, returning from a one-suspension, led the Mustangs with 21 points. His tie-breaking free throws with 10 seconds left provided the margin of victory. Brandon Jefferson, also back from a one-game hiatus, scored 11.

Timeout — Gurley. He made the switch to man-to-man.

“I told the guys in the huddle that there was good news and bad news,” Gurley said. “The bad news, it’s 9-0. The good news? There’s still almost 31 minutes left.”

The 6-foot-7 Hooper wasn’t a major factor in the first half, but increased his energy level in the second half, and the Falcons didn’t have much hope of stopping him when he was at full throttle. He made a 3-pointer in the third quarter and looked smooth at the foul line. Hooper’s eight-point third quarter pushed East’s to a 54-45 lead.

“There have been games where we’ve had a scoring drought and then dropped our heads,” Gurley said. “We had lulls today, but we kept fighting. We showed some heart.”

Brawley made three 3-pointers in the third quarter to keep West close.

In the fourth quarter, West caught up. Brawley tied the game at 60-all, with 1:50 remaining, and then again at 62-all, with a driving scoop with 41 ticks left.

East turned it over a few seconds later, but with 14 seconds remaining, Sprinkle forced a five-second, closely guarded violation.

Inbounding from the side, East was able to get the ball to Hooper at the high post, and he drove the lane and drew a foul. With 10 seconds left, he calmly swished both free throws.

After that, both teams made miscues and lost possessions. The game ended with West’s Davis Tadlock firing a runner from halfcourt.

“We made countless mistakes,” Misenheimer said. “Too many times, we tried to make home-run plays instead of fundamental basketball plays, but we did enough. Mike has got West Rowan’s kids playing very, very hard. They’re going to get some wins.”

East is in the fifth-place game today at 1:30 against Carson. West will play South Rowan for seventh place at 10:30 a.m.

By David Shaw sports@salisburypost.com SALISBURY —Brooke Stouder was wrong — but only by an eyelash. Before Friday night’s semifinal at... read more