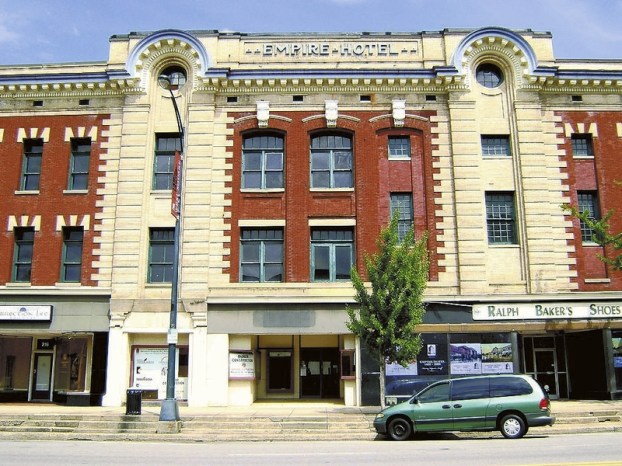 The vacant Empire Hotel on South Main Street in Salisbury dates to the 1850s.

The new year is just days away and with it will come a litany of resolutions, some the same as the previous year and others that people will never see to completion.

We think Rowan County should look at 2019 with optimism because, while change isn’t always good, there are plenty of events that sit on the horizon and pose positive potential for our community.

Some items may require a bit more work to arrive at a good solution.

Thorny or not, here are a few new year’s resolutions for Rowan County in 2018:

• Once and for all, the Rowan-Salisbury School System must arrive at a resolution for its closure and consolidation plan, which arose as a possibility years ago and came back with a few tweaks this year. The solution may be as simple as redistricting or as unfortunate as closing some schools, often the heart of a community. Ask someone in Woodleaf for proof of that. Whatever the solution, the school board must strive not to unnecessarily close facilities when there are other, sustainable options.

• The Rowan-Salisbury School System must also determine what its “renewal district” status means for the curriculum and experience at local schools.

• The Salisbury Police Department should work to continue the positive progress made under Chief Jerry Stokes’ tenure to this point. SPD has, effectively, solved the staffing crisis that plagued the department a short time ago. The department has made strides to build community trust, which can be critical in solving cases, but there’s still more work to do.

• But the police department must also bring closure to the murder of 7-year-old A’yanna Allen, killed in December 2016 when a barrage of bullets swept through the home of her paternal grandmother. At a time when gang violence was the culprit for a number of homicides or nonfatal shootings, Allen’s murder rattled the collective Salisbury community. Whether it’s an arrest, indictment or simply a public announcement that the people responsible for her death are in custody on other charges or dead, Salisbury would benefit from knowing that Allen’s death has not been forgotten.

• Whether it occurs in a municipality or an unincorporated area, Rowan County must work harder than ever to score a major economic development win in 2019. That may be a manufacturing or logistics facility employing a few hundred workers or another residential development with a few hundred homes, but the economy is continuing to hum along at a rapid pace and now is the time to begin to land major developments if Charlotte’s growth is ever truly going to spill over Rowan’s borders.

• The Salisbury City Council must work to improve the professional relationship among its members. There should be room for disagreement, and council members certainly don’t need to be friends, but all should be able to debate openly without tip-toeing around thorny questions. Improving that relationship may be as simple as focusing on communication among members. When a simple resolution invokes debate about the process by which it arrives in front of the council, perhaps that’s the best place to start.

Naturally, as we near the end of 2018, many of the Salisbury Post’s stories have reflected on the events of... read more