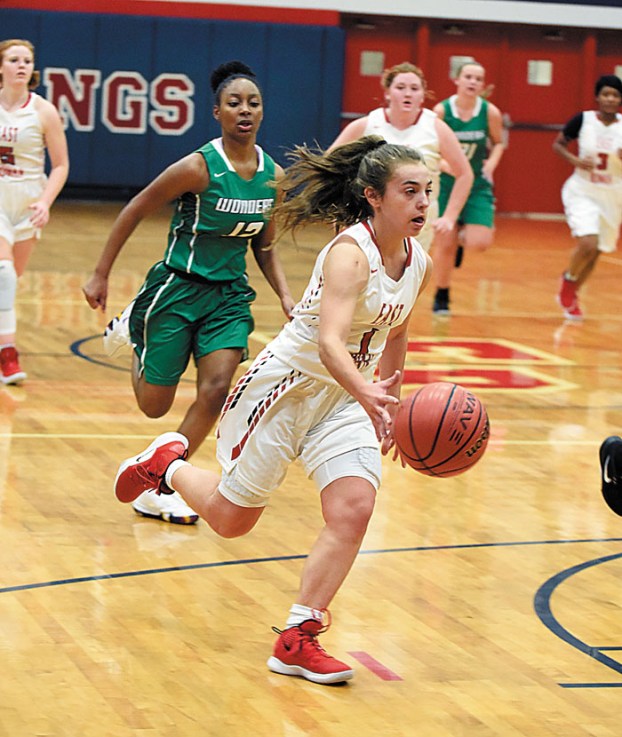 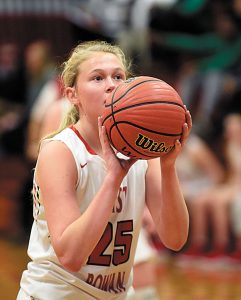 East, now 10-2, fell in Thursday’s first round to South Rowan, and came out a little flat against the winless Wonders (0-9). A.L. Brown totaled just 11 points during Thursday’s first-round loss to Carson, but found themselves in an 11-11 deadlock with the Mustangs, after one quarter.

But Harrison led an East defensive effort that nearly shut out the Wonders in the second quarter, taking a 17-13 halftime lead.

Harrison, who had a double-double in the game with 16 points and 10 rebounds, scored eight of her points in the first half.

“I’m never surprised by her stats,” East coach Kevin Holland said, of Harrison’s game. “She’s tough. She carried us early and then we woke up in the end. She is short, but not afraid to get in there and fight for rebounds and loose balls. She’s got a heart twice her size.”

East moved ahead comfortably with a 16-8 third quarter, behind eight points from junior wing Grace Eagle and four more points from Harrison.

Eagle, who had been held scoreless in the first half, followed a layup and free throw with a deep 3-pointer, extending the Mustangs’ lead to 31-19, with a minute left in the period.

Holland thought that third quarter turned the contest, after 10 first-half turnovers had proved costly. The Mustangs turned the ball over just four times in the second half.

“We’ve been starting slow and haven’t been playing well lately, but the third quarter was more of what I was looking for,” said Holland. “In that quarter, we played the way we need to play in order to be competitive.

“I feel like if we can keep everybody motivated, we’ll be alright,” she said. “We just have to play our game and play as a team. They (A.L. Brown) were pretty quick, but we had some lazy passes that led to some of those turnovers. We can correct that with sharper passes.”

Led by Jala Campbell’s fourth-quarter 3-pointers, the Wonders actually closed the deficit to 35-30, with 1:23 remaining in the game. After East’s Mary Spry missed the front end of a one-and-one at the foul line, A.L. Brown had a chance to get even closer.

But Spry, a 5-10 freshman, redeemed herself on the defensive end, blocking a shot with 35 seconds left, leading to game-clinching free throws from Harrison.

“An understatement, but that was a big block,” added Holland.

Spry followed Harrison on the stat page with nine points and eight rebounds, plus several blocks and steals. Eagle totaled nine points as well. Harrison was 6-for-6 at the foul line, including four straight in the final 27 seconds.

“We were a little better than yesterday (Thursday),” said A.L. Brown coach Doug Wilson. “We had a chance. I guess that’s all you can ask for.”

NOTES: The Wonders will play for seventh place on Saturday at 9 a.m., against North Rowan. … East will play at noon again, this time against Davie County in the fifth-place game. … “If you’re in a tournament like this, you want to win the championship,” said Holland. “But if you fall out of contention, then you want to go 2-1. That’s what we’ll try to do.”