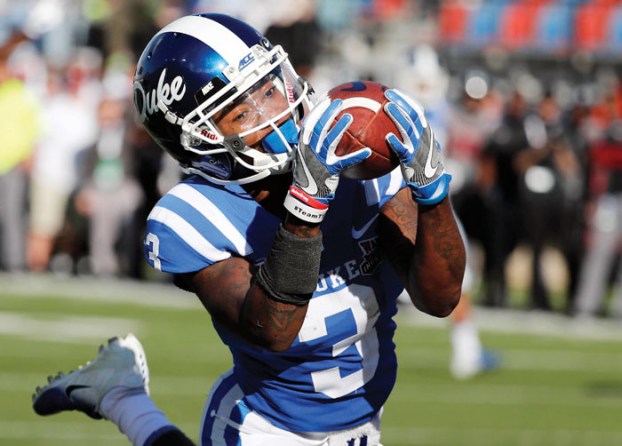 SHREVEPORT, La. (AP) — Temple was making big special-teams plays, returning interceptions for touchdowns and looking like a team that might crush Duke for a big postseason win.

But the Owls had one problem that couldn’t be overcome: Coach David Cutcliffe doesn’t lose in Shreveport.

Daniel Jones threw for 423 yards and five touchdowns, T.J. Rahming caught 12 passes for 240 yards and two scores, and Duke recovered from a slow start to blow past Temple 56-27 in the Independence Bowl on Thursday.

Cutcliffe is now 4-0 in the Independence Bowl dating back to 1998.

“When we come to Shreveport,” Cutcliffe said with a grin. “Don’t bet against us.”

Duke (8-5) snapped a two-game losing streak by putting on an offensive show. The Blue Devils scored touchdowns on seven straight drives, flipping a 27-14 deficit in the second quarter to a 56-27 lead by midway through the fourth.

“We kind of hit a lull for a second, but I don’t think we ever lost confidence,” Jones said. “We knew we had some good stuff and if we caught a few breaks we could catch momentum and keep it rolling.”

Jones’ five touchdown passes and 423 yards passing both set Independence Bowl records. So did Duke’s 56 points. Cutcliffe wasn’t surprised by the offensive success because he felt the team’s preparation was excellent.

“It was very evident in Durham what their intentions were,” Cutcliffe said. “We didn’t have a bad minute of practice.”

This was Cutcliffe’s first Independence Bowl win at Duke. He led Ole Miss to victories in Shreveport in 1998, 1999 and 2002 and is already enshrined in the bowl’s Hall of Honor.

Temple (8-5) lost for just the second time in its past eight games.

“We’ve got a great culture, we love each other and we’re tough,” Temple interim coach Ed Foley said. “But you still have to go out and make plays. And (Duke) went out and made more plays than us. That’s what cost us the game.”

The Owls took a 13-7 lead in the first half after Delvon Randall’s 52-yard interception return for a touchdown. It was the 10th game this season in which they scored a non-offensive touchdown.

Temple pushed ahead 27-14 late in the second quarter, but Duke responded with 22-yard touchdown pass from Jones to Rahming to pull within 27-21 by halftime.

“When we came in at halftime our offense was hot. It was a just a matter of time,” Cutcliffe said.

Temple’s Anthony Russo completed 25 of 46 passes for 228 yards, one touchdown and one interception. The Owls didn’t score in the second half and gave up 42 unanswered points.

“They brought a little more pressure, but that’s on me and the offensive line to get that picked up,” Russo said. “I just don’t think we found our groove in the second half.”

Things were going so well for Jones that he completed a 6-yard pass to himself during the fourth quarter. He tried to throw a pass over the middle, but a Temple defender batted it into the air before it fell back in Jones’ hands and he sprinted forward to make something out of the play.

Temple: The Owls looked great for most of the first half, but once Duke’s offense got going, Temple’s defense didn’t have an answer. Now Temple will focus on the transition to new coach Manny Diaz, who replaces Geoff Collins.

Duke: It was an impressive win for Duke, which scored just 13 combined points in losses to Clemson and Wake Forest to end the regular season. The lopsided result gives the Blue Devils some momentum heading into 2019.

Duke should return most of its defense next season, but must replace several offensive starters, including three linemen. The Blue Devils have a difficult game against Alabama in Atlanta to open next season.

NEW YORK (AP) — Jonathan Taylor ran for 205 yards and a touchdown and topped the 2,000-yard season mark to help Wisconsin rout Miami 35-3 in a chilly Pinstripe Bowl on Thursday night.

Taylor, just a sophomore, ripped off runs of 39 and 41 yards and was sensational at Yankee Stadium and combined with a defense that forced five turnovers to help a Wisconsin (8-5) team ranked fourth in the first AP Top 25 poll salvage its fifth straight bowl victory.

Last season. Taylor ran for 130 yards in Wisconsin’s 34-24 win over Miama in the Orange Bowl.

The Badgers, certainly used to the cold, came out swinging for the fences — they scored two touchdowns just 3 1/2 minutes into the game and seemingly knocked the will out of Miami (7-6).

Jack Coan made the most of his start for injured Alex Hornibrook (concussion) and hit Kendric Taylor for a 35-yard TD on the first drive. Rosier’s first pass of the game was intercepted and Taylor capitalized with a 7-yard score to make it 14-0.

Coan is a Long Island native and needed nearly 50 tickets for friends and family. He scored on a 7-yard run in the fourth for a 28-3 lead.

Wild and crazy season ends with lots of playoff uncertainty

By Barry Wilner AP Pro Football Writer In a wild and crazy season, the biggest remaining tumult is in the... read more