2018 Newsmaker of the Year: Rowan-Salisbury Schools 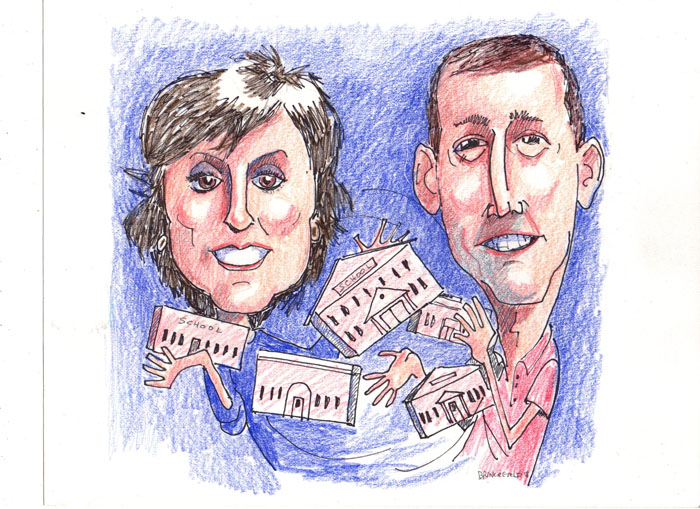 SALISBURY — It’s been a year of ups and downs for Rowan-Salisbury Schools. The district has made state history and ruffled local feathers with a school-closure plan.

Because of that, Rowan-Salisbury Schools is the Salisbury Post’s 2018 Newsmaker of the Year.

The district grabbed statewide attention in June when it because the first school system in North Carolina history to be granted “renewal” status, meaning that it has charter-like flexibility. Local schools and the administration have control over the calendar, budget and staffing.

For Superintendent Lynn Moody, the opportunity came by being in the right place at the right time. Like many superintendents, Moody asked for charter-like flexibility any time she met a state lawmaker.

“I think every superintendent I know of has asked for this kind of flexibility in any arena they can. It was a surprise that we got this,” Moody said in an earlier interview.

One representative took her seriously — state Sen. Michael Lee, who represents New Hanover County. Lee, a Republican and co-chairman of the House Education Committee, introduced House Bill 986, which offered renewal status to the Rowan-Salisbury district. According to the bill, the district was chosen because of its number of low-performing schools and its number of restart schools, which are individual schools with charter-like flexibility.

The proposal quickly moved through committee and onto the floor of the N.C. Senate, where it passed the 47-0. It passed the House on June 14 by a 93-12 vote.

Rowan-Salisbury Board of Education Chairman Josh Wagner said he found out about the proposal shortly before it was approved. At the time, Wagner said, he thought it was a long shot.

“‘That’s great; it’s not going to happen,'” Wagner recalled thinking. “Obviously, I was wrong. I was shocked.”

On Aug. 2, the plan was unanimously approved by the State Board of Education, cementing Rowan-Salisbury’s role as a renewal district.

Since then, the district has been busy planning. Teacher-led design teams are steering the ship, helping design curriculum, calendars and how schools will interpret renewal.

“What I hope to see is that teachers feel like they have more of a voice,” Moody said in a prior interview. “And that will lead to students being inspired and more engaged in the classroom.”

While some argue that the legislature gave the district renewal status as a last-ditch effort because of low test scores, Wagner and Moody disagree.

“I think renewal is much less about us and much more about a state idea about how they want to move forward. … We just so happen to be the guinea pig,” Wagner said.

So far, the district has taken a few small steps — approving an early-start calendar and taking advantage of hiring flexibilities. The transitional area is uncertain, Wagner said.

“We’re trying to follow the rules and right the rules altogether, and that’s a very weird place to be,” Wagner said.

But the renewal district’s significance has been overshadowed of late by a consolidation proposal that would shutter several schools in the Rowan-Salisbury system.

In November, the district made headlines again when a committee of residents proposed a plan to close nearly a dozen local schools. The proposal has three tiers, spans more than 30 years plans and calls for the closure of:

• Knox Middle and Overton Elementary, which would be replaced by a new K-8 school.

• Corriher-Lipe and China Grove middle schools, which would be replaced by a new, consolidated school.

• Enochville, China Grove and Landis elementary schools, which would be replaced by a consolidated southern school.

The consolidation conversation is one that’s been years in the making. The school board first proposed a consolidation plan in early 2016 because of more than $200 million in capital needs.

“We need to find someway to improve the system as a whole,” Wagner said. “… Everything that’s happened has been over a long span of time.”

The topic was quickly shut down by community opposition to the 2016 plan. In the aftermath, the board decided to form a capital needs committee, composed of residents, elected officials, business people and other stakeholders in the county. The committee met and made a recommendation to close roughly 10 unnamed schools in September 2017.

The school board sat on the recommendation for nearly a year before asking the committee and staff to draw up a more specific recommendation. That is the proposal now circulating and generating opposition, particularly among residents of the North Rowan community.

Board members and district staff have held a series of community input sessions in each major region of the county, inviting people to air their grievances and propose alternative ideas.

“Nothing has been done, No. 1. No. 2, nothing will happen until the board decides,” Wagner said. “I don’t believe the board is going to take action until they’re ready and it’s something they believe is the right thing to do.”

According to Wagner, the current state of the school system is the result of a long history of neglect and poor planning by past boards.

“I don’t think (the current board) necessarily carries the weight of what has brought us here, though I do think past boards carry that weight,” he said.

For example, Wagner said, if past boards had done proper research and planning, he believes that Carson High School would not have been built.

“We didn’t need that high school,” he said.

Along with other poor decisions, that left the school system in a sticky situation, with a couple of thousand empty seats, aging school buildings and a declining student population.

“It is unfortunate that decisions of the past spill over,” Wagner said. “It’s making this much harder on everybody.”

Wagner said he believes the first step is redistricting.

“One of the problems we have is because we haven’t redistricted in so long. It’s been almost 30 years since we’ve redistricted,” he said.

Past boards have proposed redistricting, but the talk was shut down by public reaction. It’s one reason district schools have such uneven populations, with some areas having too few students and others too many.

“I think it absolutely has to be a first step. … You’ve got to figure that out first,” Wagner said.

As the board moves forward, considering community input and adjusting its plans to match, Wagner said he believes it will look to the new West Rowan Elementary School as a model. The school resulted from the consolidation and closure of Woodleaf and Cleveland elementaries. Students are scheduled to start classes in the new building Jan. 7.

With 2019 days away, the district’s future is ever-changing.