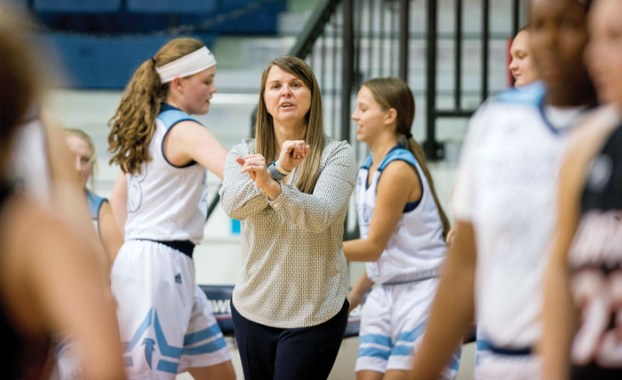 West Rowan girls move on to the semifinals 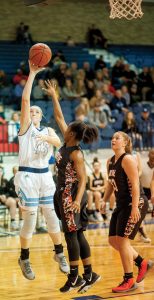 SALISBURY — It was the noon girls game in the annual Dale’s/Sam Moir Christmas Classic and heavily-favored West Rowan wasted no time in showing Davie County the door to the consolation round.

Junior post player Abigail Wilson, who had scored her 1,000th-career point against the War Eagles in that earlier contest, scored 10 quick points as the Falcons went up, 12-0, just 3:23 into the first quarter.

Davie’s Maddie Tellup finally broke the ice with a bucket, making it 12-2, but two 3-pointers from Mary Sobataka and another from Gabby Blabon completely broke the game open at 21-5.

For good measure, Wilson dropped in a layup before the buzzer for her 12th point in the opening frame. She also had five of her game-high 11 rebounds in the first period and Kia Pharr, a 6-foot West post player, had three key boards as well.

“We tried about four different things defensively, but there’s not a lot you can do when they have two post players who are that physical and strong, plus three girls who can shoot it from outside,” said Davie coach Kevin Revels. “It’s just hard to deal with.

“We talked before the game that our best friend was going to be long possessions on offense,” continued Revels. “But we went out and did not do a good job of holding onto the basketball and allowing them to score quickly, putting ourselves in a hole.”

In the second quarter, the War Eagles’ turnovers continued to rise while the West offense stayed hot. Wilson, Sobataka and Blabon hit some more bombs from outside and still another 6-0 post, Whitley Arnott, exploded for six points and seven rebounds in the period.

West led at halftime, 44-9, after shooting 53 percent (19-of-36) from the floor, completely controlled the boards and committed just two turnovers. If you wanted to nit-pick, the Falcons did missed three free throws.

“I thought we played well,” said West coach Ashley Poole. “Sometimes, coming off a break, it’s hard to find your rhythm, but we jumped right into it today. We shot well. Our guards were concerned about shooting in this (bigger) gym, but I just told them to look at the rim and shoot it … we’ve got rebounders.”

Wilson had 18 points at halftime and played just a little in the second half, finishing with 20 to lead all scorers. But the 5-11 star had done her damage early and often.

“She (Wilson) gets a lot of attention and she works the ball well,” added Poole. “She knows when she gets it inside, she can always kick it back out to a guard. She trusts her guards to shoot and we trust her to clean up if they miss.”

The modest Wilson deflected the glory.

“It just so happened that I was able to get out and run, and the guards were able to get me the ball,” said Wilson, who made 10-of-16 shots, all in or near the paint. “I just happened to be running the floor and be in the right place (in the first quarter).

“We felt like we were bigger and the plan was to get looks inside and then when they collapse on us, I think the posts are really good about getting the ball back out to the open shooters on the wing,” continued Wilson. “And they can shoot ’em.”

Taylor Poole drilled two straight 3-pointers to open the second half, and although Davie played better (12 points) in the third quarter, it was way too late.

Arnott sank two free throws with 5:20 left in the game, pushing the game (62-22) into running-clock mode.

Like Wilson, Arnott finished with a double-double — 10 points and 10 rebounds. Sobataka totaled 11 points.

“I was pleased with our girls’ effort in the second half,” said Revels. “They came out, continued to fight and didn’t give up. West Rowan can be one of the best 3A teams in the state. They’ve got the pieces to make a deep playoff run and they’re going to give a lot of teams problems with that combination of size and three outside shooters. They’re really tough to defend.”

NOTES: West will play Salisbury in today’s 3 p.m. semifinal. “Overall, I was impressed with our effort against Davie,” said Coach Poole, “but the next one will definitely be a tougher game. We’ll be ready.” … West guard Megyn Spicer was called up from the JVs and saw her first varsity action, scoring four points in the final period. … Davie has the dreaded 9 a.m. start this morning, battling North Rowan.

By Mike London mike.london@salisburypost.com SALISBURY — North Rowan played in the second round of the state playoffs after receiving a... read more