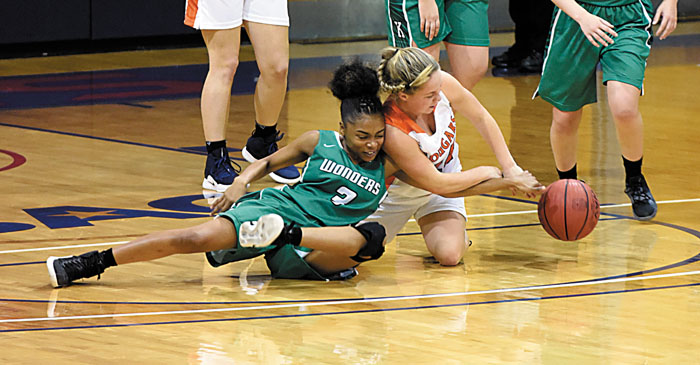 SALISBURY —A.L. Brown’s girls slowed the pace to a crawl on Thursday in a first-round game in the Dale’s Sporting Goods Sam Moir Christmas Classic.

It was 28-6 at halftime and 43-6 after three quarters. Even Carson fans felt like cheering when the Wonders made a couple of fourth-quarter buckets.

No one blamed the Wonders (0-8) for the afternoon snoozer. Eighth-seeded A.L. Brown had already played top-seeded Carson (12-0) twice in earlier gams this season, and the scores were 71-28 and 71-25.

There was no point in enduring a three-peat of that.

“Slowing it down was the only shot we had,” A.L. Brown coach Doug Wilson explained. “What does Carson average — 70, 71? To me, this game felt better. This was a moral victory.”

Carson coach Brooke Stouder played for East Rowan during Wilson’s first tour of duty as A.L. Brown’s coach. The 68-year-old Wilson, a recent recipient of the  Order of the Long Leaf Pine, coached the program for nine seasons from 1997-2006. He was summoned back as interim coach for this season shortly before it got started.

“I understand where Coach Wilson and A.L. Brown were coming from today,” Stouder said. “It was a slow game and we didn’t shoot well, but I thought it was good that we got to experience a situation where someone just held the ball on us. We haven’t been in that situation before, but we did a nice job of just grinding it out.”

Ellie Wilhelm got Carson started with two 3-pointers and eight early points. The Cougars led 12-3 after a quarter.

Carleigh Perry had a spree inside in the second quarter to make it 22-3. After Jala Campbell made a 3-pointer for the Wonders, McKenzie had a transition flurry for that 28-6 halftime.

“We had a lot of really good looks that we just didn’t make,” Wilson said. “We make a few shots and it’s still close at halftime. But Carson is good. They’re very good.”

“The biggest thing for us today was continuing to play at 100 percent, no matter what the score was,” Wilhelm said. “They tried very hard to slow us down, but I thought we stayed calm and handled everything well.”

Victoria Post scored seven for Carson in the fourth quarter.

The 11 points allowed by the Cougars was close to a school record. Carson beat Northwest Cabarrus, 50-10, in December, 2016.

“We didn’t allow a single point in the third quarter,” Stouder said. “Our defense was solid.”

Campbell accounted for all of A.L. Brown’s points in the first half with two 3-pointers.

Ariana Davis made a free throw  in the fourth quarter  to end a Wonders’ scoring drought of 15 minutes. Kaylee Yow then followed a missed free throw by Davis with a bucket.

“We’ve played eight games so far and five have been against Carson or West Rowan,” Wilson said. “That’s a tough situation.”

A.L. Brown plays No. 6 Davie County in a noon consolation.