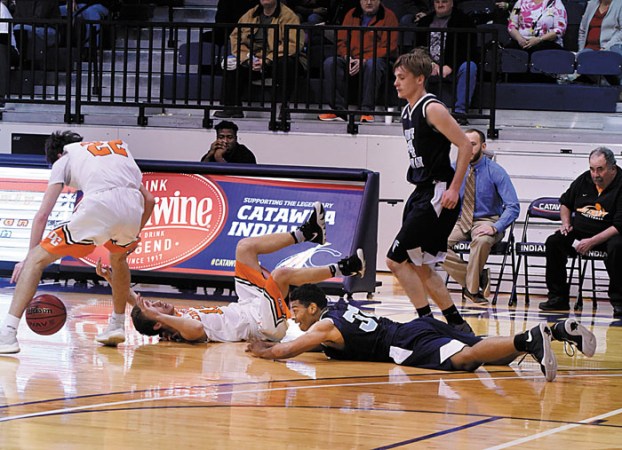 SALISBURY — Davie County boys basketball coach Mike Absher looked at his program, looked at his assistant coaches, looked up at the roof of Goodman Gym.

Who in the world was this guy?

“I didn’t remember No. 32 at all from when we played West Rowan in November,” Absher said. “But now it looked like he was going to score 40. It looked he was out here to beat us by himself.”

West’s No. 32 was Jay Joseph, a 6-foot junior. Joseph made five buckets in the first quarter as eighth-seeded West hung with top-seeded Davie.

But Joseph eventually cooled off and settled for a career-best 18 points. Davie pulled away from the Falcons and won, 77-54,  in a first-round game in the Dale’s Sporting Goods/Sam Moir Christmas Classic.

Davie had destroyed the Falcons in that game back in November, 63-22.

“West obviously has gotten a whole lot better,” Absher said. “I thought my guys did a good job mentally of not taking this game for granted. They were ready to play an improved team.”

Davie (7-0) settled the outcome in the second quarter by holding the Falcons to two points in a six-minute stretch. During that span, the War Eagles stretched an 18-15 lead to 35-17.

“Defensively, we are much better than we were last year,” Absher said. “We got a lot of stops in that stretch and that defensive effort triggered some good offensive possessions.”

West (0-10) didn’t have an answer for Davie’s 6-foot-8 senior Owen McCormack, who scored 23, or for Michael Walton, a 6-foot-4 swingman who combines muscle with good quickness. Walton, a four-year varsity player, made three 3-pointers and got to the rim frequently.

“Michael wasn’t healthy last year, but he is now,” Absher said. “He’s a really good player. And Owen is a more versatile scorer than he was a year ago. He’s always been able to shoot, but now he’s attacking the basket harder and he makes his free throws.”

There were a couple of moments in the third quarter when it looked like coach Mike Gurley’s Falcons might make a charge, but Walton buried two 3-pointers to keep the Falcons at bay.

“It was good to make some 3s,” Walton said. “I haven’t been shooting them all that well, but something clicked tonight.”

Davie led by as many as 26 points early in the fourth quarter. Absher subbed liberally, and the Falcons quickly got back within 16.

Absher sent the starters back in to finish things off, and they had some superb possessions. There was a one-handed dunk by Walton, a fine Troy Griggs pass to Jacob Hendrix for a layup and a Brooks Johnson 3-pointer.

Davie limited its turnover tally to 11.

“It’s a fun team to coach,” Absher said. “We’ve got a bunch of seniors who know what to do and how to play, and it’s great to watch them share the ball.”

By Mike London mike.london@salisburypost.com SALISBURY —A.L. Brown’s girls slowed the pace to a crawl on Thursday in a first-round game... read more