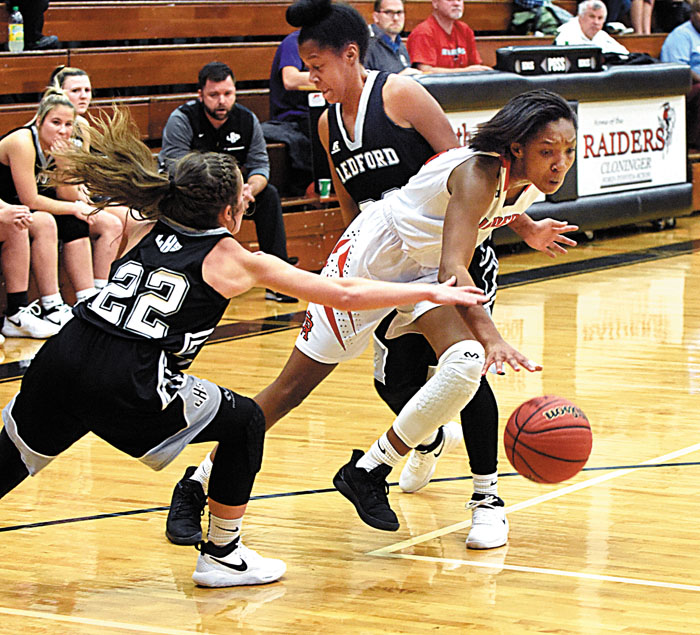 SALISBURY —There’s nothing wrong with swinging for the fences.

That’s how South Rowan’s fifth-seeded girls basketball team approached its chances in the Sam Moir Christmas Classic at Goodman Gym. Never mind that the Raiders had been pied in the face by East Rowan — its first-round opponent on Thursday — less than a month ago.

“We wanted this,” first-year South coach Stacy Ellis insisted. “When we saw that seeding and that matchup come out, we wanted it. Honestly, we were fresh out of the gate and a little nervous that night when they beat us.”

“Last year, we did the same thing,” Downs said after contributing 24 second-half points. “We surprised some people and made it all the way to the finals. We know it won’t be easy getting back there, but we’re going to give it a fight.”

East (9-2) never regained traction after relinquishing an early lead. Junior Adalie Harrison turned a pair of steals into fast-break layups — sandwiched around Grace Eagle’s 3-pointer from the right wing — as the Mustangs surged ahead, 12-4, in the opening four minutes.

“Then our defense went wrong,” said East coach Kevin Holland. “From the start, we had no defensive intensity. Actually, we’ve been struggling the last three or four games, but we haven’t run into a player as dynamic as Janiya. She really knew how to take advantage of us. We couldn’t keep her away from the basket.”

Downs lit the place up like Jimi Hendix’ Stratocaster at Monterey. Her first basket came on a spinning layup from the left baseline, her second on an authoritative stick-back and her third on a spectacular, full-court dribble-drive to the hoop.

“She’s so good at just taking over a game,” said Ellis. “She makes sure we never get into a lull where we can’t score a bucket. Strong left hand, strong right hand and can finish at the basket. And as a guard, she’s even got some post moves.”

South took command of the game by closing the first half on a 9-0 run. There was Madison McGuire’s three-ball from the left corner and an over-and-under scoop layup by Downs. The Catawba-bound senior added two more driving moves to the rim that gave the Raiders a 29-20 halftime lead.

South’s defense limited East to 12 field goals — and just five in the second half. The Mustangs fell behind by 16 points after three quarters and were outscored 17-5 in the fourth.

“Janiya drives to the basket and finishes plays,” McGuire said. “But we all share the ball. Tonight we played as a team, passed it around and had each other’s backs. I know we’re not favored (in the tournament), but if we play like this we have a chance to advance.”

East, which converted seven of 18 free throws, will meet A.L. Brown in today’s noon consolation game — with Downs’ image lingering in their heads.

“She’s a great player, but we definitely made it too easy for her,” Holland said. “Way too easy.”

NOTES: East stopped South, 43-31, when the teams kicked off the season Nov. 27 in Landis. … Freshman Bethany Rymer had 12 points and McGuire 11 for the Raiders. Eagle made four 3-pointers and led East with 17 points. … The game was halted early in the second half when East’s Harrison stumbled into the lighted advertising sign below the scorer’s table. She was treated for a bruised knee and returned in the fourth quarter.