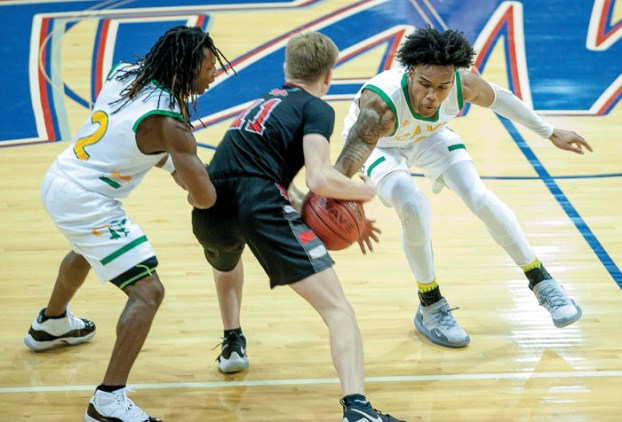 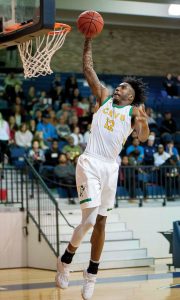 SALISBURY — North Rowan’s boys have two marvelous senior forwards in Brevin Goodlett and Dayjuwon Cooke who are combining for 39 points per game.

But a lot of North games are still going to be decided by senior point guard Derrick Page’s decision-making.

“He’s the guy that dictates the flow  and gets the ball where it needs to go,” North coach Jason Causby said.

Seventh-seeded South Rowan stayed with North for a half on Thursday in a first-round game in the Dale’s Sporting Goods Sam Moir Christmas Classic. But once Page got Cooke involved early in the third quarter, it was all over. Cooke scored 14 of his 16 in that quarter. The Cavaliers blew out South, 66-39.

“I’d gotten off to a bad start, had missed a lot of scoring chances early,” Cooke said. “But Derrick helped me get going. All my points come from my teammates.”

Goodlett, who made three 3-pointers, scored steadily all day and finished with 25.

Second-seeded North (7-0) was supposed to win easily, but South set a methodical pace in the first half, and the Cavaliers didn’t do anything to speed them up. Brenden Finger made two of his three 3-pointers for South (1-6) in the first half, and the Raiders actually led three minutes into the second quarter, 19-14.  The Cavaliers needed an alley-oop bucket by Cooke — his first points of the day — to stagger to halftime with a 26-23 lead.

“I was disappointed in our energy level in the first half, but I wasn’t surprised by it,” Causby said. “We were coming off a sluggish practice where I had to get on them, and when we played that sluggish half today, I told them we’d already had that conversation. They were playing the same way they’d practiced.”

There was one major halftime change as far as X’s and O’s. After playing straight man-to-man in the first half, North switched to some traps in the second half, forced some turnovers, got some easy points and speeded up the tempo.

“We made very good halftime adjustments,” Page said. “We just had to get together as a team and I had to start finding Cooke and Goodlett. That first half wasn’t good, but our second half was amazing.”

For South Rowan coach Andre McCain, the second half was a nightmare after a first half in which South played about as well as it possibly can.

“It was a tale of two halves,” McCain said. “We did a lot of the things we wanted to do in the first half and played really hard, but then we came out flat, for some reason, in the second half.”

North’s best ball of the afternoon came in the first two minutes of the second half. North put the jump shots on the back burner and pounded the ball in to Cooke and Goodlett with great results.

Page fed Cooke for a bucket to open the half. Then Cooke got a forceful three-point play.

In the third quarter, North outscored South, 23-5 for a 49-28 lead. Cooke and Goodlett had 20 of those 23, with the others coming on a 3-pointer at the end of the period by reserve guard David Broaddus.

“Teams aren’t going to roll over for us,” Causby said. “We played a  strong third quarter, but we can’t play like we did in the first half today and still beat the better teams. The hole is going to be too deep.”

South doesn’t have a lot of size or firepower and hasn’t score 50 in a game yet. Thursday’s output was a season low.

“North stepped up the defensive intensity in the second half, and we didn’t respond very well,” McCain said. “They’ve got some long athletic guys. The encouraging thing is we played right with them for a half today, and that’s probably the best team in the county.”

North takes on third-seeded rival Salisbury at 4:30 p.m. today in what should be riveting semifinal.

South will be in 10:30 a.m. consolation action against rival Carson.

By Dennis Davidson dennis.davidson@salisburypost.com SALISBURY — It was the noon girls game in the annual Dale’s/Sam Moir Christmas Classic and... read more