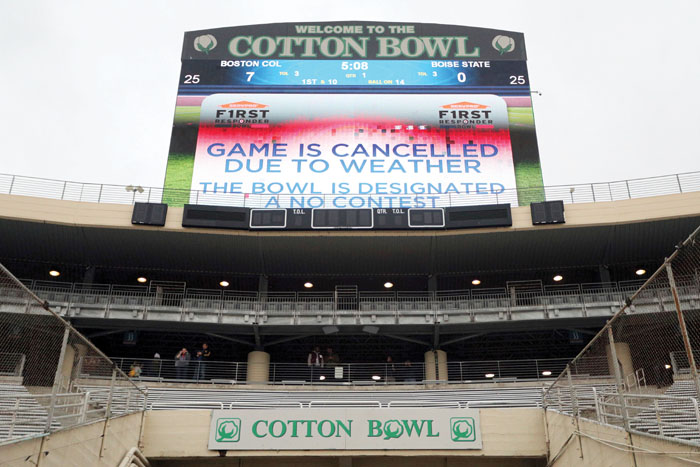 The First Responder Bowl between Boston College and Boise State was canceled due to weather and was designated a no contest after multiple lighting delays Wednesday, Dec. 26, 2018, in Dallas. (AP Photo/Richard W. Rodriguez)

DETROIT (AP) — Mohamed Ibrahim ran for career-high 224 yards and two touchdowns, leading Minnesota to a 34-10 victory over Georgia Tech on Wednesday night in the Quick Lane Bowl.
The Golden Gophers (7-6) won three of their last four games, and Ibrahim had a lot to do with that. The redshirt freshman running back had 121 yards rushing in a win at Wisconsin that made Minnesota bowl eligible and ran for 155 yards last month in a victory over Purdue.
The Yellow Jackets (7-6) did not have the speed or strength to slow down Ibrahim and their triple-option offense was stunted in coach Paul Johnson’s finale. The Gophers limited Georgia Tech to 206 yards on the ground after it led the nation with 335 yards rushing per game.
Minnesota led 13-0 early in the second quarter after Tanner Morgan threw an 18-yard touchdown pass to Tyler Johnson in the first quarter and Emmit Carpenter made two field goals. Ibrahim’s 3-yard touchdown run midway through the third quarter made it 20-3.
The Yellow Jackets responded with Nathan Cottrell’s 20-yard touchdown run, but their defense allowed Ibrahim to score again on the ensuing drive. Morgan connected with Johnson on a 30-yard touchdown strike with 6:19 left, giving the Gophers a 24-point cushion.
CHEEZ-IT BOWL
TCU 10, CALIFORNIA 7, OT.
PHOENIX (AP) — Jonathan Song kicked a 27-yard field goal in overtime after being replaced for a potential winning kick at the end of regulation, lifting TCU to a wild victory over California in the Cheez-It Bowl.
TCU (7-6) had a chance to win it in regulation, sending out Song for a 44-yard field goal. After Cal (7-6) called a timeout, the Horned Frogs switched kickers and Cole Bunce hooked the kick wide left.
TCU’s Juwuan Johnson intercepted Chase Forrest’s pass to open overtime and nearly returned it for a touchdown. The Horned Frogs were called for sideline interference on the play and had to start their overtime possession at the 40.
TCU worked its way down the field and Song was sent out for the winner. Cal called another timeout, but this time Song stayed out and sent the kick straight through the uprights to end a crazy night in the desert.
The Bears and Horned Frogs combined for nine interceptions — most in the bowl’s 30-year history by two — including three in five plays of the second quarter. Cal’s Jaylinn Hawkins broke a Cheez-It Bowl record with three interceptions.
Sewo Olonilua ran for 194 yards and a touchdown for the Horned Frogs, who overcome an ugly night by quarterback Grayson Muehlstein. The fifth-year senior threw four interceptions and had 27 yards on 7-of-20 passing. Cal’s Chase Garbers threw three first-half interceptions before being replaced by Forrest, who had a pass intercepted by TCU’s Vernon Scott in the fourth quarter.
SERVPRO FIRST RESPONDER BOWL
NO. 23 BOISE STATE VS. BOSTON COLLEGE, CCD., WEATHER
DALLAS (AP) — No. 23 Boise State’s first appearance at historic Cotton Bowl Stadium turned into what is believed to be the first bowl game called off because of weather.
The SERVPRO First Responder Bowl between the Broncos (10-3) and Boston College (7-5) was canceled because of the threat of severe weather after a delay of nearly 1 1/2 hours Wednesday.
The game was stopped with BC leading 7-0 with 5:08 remaining in the first quarter. The delay came not long after AJ Dillon’s 18-yard touchdown run.
NCAA spokesman J.D. Hamilton said via email that it was believed to be the first bowl canceled by weather. Hawaii’s planned second postseason game of 1941, against San Jose State, was canceled because of the attack on Pearl Harbor.
Before the announcement, fans had begun returning to their seats after severe storms rolled through the area near downtown Dallas. Lightning strikes near the stadium continued intermittently for three hours after the initial delay, and more storms were expected.
___
More AP college football: https://apnews.com/tag/Collegefootball and https://twitter.com/AP_Top25