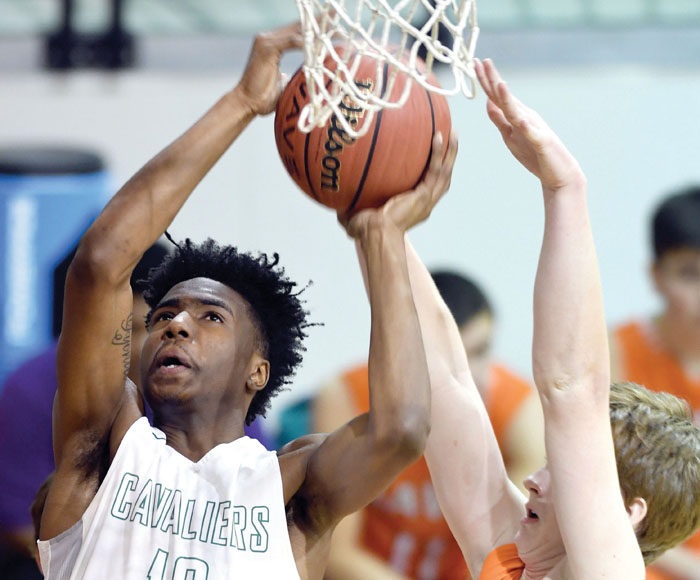 North Rowan edged Davie by a single point in a title-game thriller in 2011.

Davie, led by the Martin twins (Cody and Caleb), who now are lifting Nevada to a place among the nation’s elite college teams, exacted memorable blowout revenge on the Cavaliers at Goodman Gym in 2012.

Davie, still coached by Mike Absher after all these years, hasn’t been in the tournament championship game since 2012, but it might be the War Eagles’ time to return to the spotlight.

Davie boasts a very experienced and superbly balanced team that can be led on any given night by one of five steady scorers.

The most likely team to be standing in Davie’s way on Saturday night when the bell rings for the 8 p.m. championship game of the Dale’s Sporting Goods Sam Moir Christmas Classic is North Rowan.

It’s a typical North Rowan team in some ways because the Cavaliers’ most consistent source of points is still the stick-back.  North has a gifted, athletic team for a 1A squad and leads the county, not only in quick jumps and offensive rebounds, but in dunks.

In other ways, it’s not business as usual at North. The Cavaliers are coached now by Jason Causby, who piloted Salisbury to a Moir tournament three-peat in 2007, 2008 and 2009, including a 2007 championship game victory against Davie.

What that means is a hard road for North. It’s arguable, but the third-best team in the tournament probably is Salisbury, and it’s likely that North will have to hurdle the Hornets, their biggest rival, in a fierce semifinal just to get to the main event.

Davie is ranked 59th in the state by MaxPreps. North Rowan is ranked 93rd for all classifications, but fifth in 1A.

If you believe in history, this is the third time North Rowan has reached the Christmas tournament unbeaten. The other two occasions —  in 1996 under coach Bob Hundley and in 2000 under coach Kelly Everhart — the Cavaliers won the event.

The boys bracket appears to be far less predictable, with far more parity than the top-heavy girls bracket. Upsets probably will occur.

If No. 6 Carson is making 3-pointers, the Cougars could challenge Salisbury in the first round. Fourth-seeded East Rowan, the most likely semifinal foe for Davie, is capable of  busting the bracket and already has played Davie very tough at home.

No. 5 North Stanly has the deadliest shooter in the tournament in Bryson Childress and could give East some first-round trouble.

No. 8 West Rowan is unlikely to be able to cope with Davie in the first round, but the Falcons should beat someone before this tournament is over.

The cost of the tournament is $8 per day or $20 for a tournament pass. It should be a bargain.

No. 1 Davie County (6-0) — Absher has coached three tournament champions and four runners-up, so he’s had plenty of success in this event. He has veteran horses to ride and will start four seniors and a junior. Presbyterian signee Owen McCormack is a 6-foot-8 guy who can shoot. Michael Walton, Jacob Hendrix, Troy Griggs and Brooks Johnson can all play and have experienced the craziness of the tourney crowd.

No. 2 North Rowan (6-0) — North Rowan senior forwards Dayjuwon Cooke and Brevin Goodlett are county player of the year candidates. Cooke has scored at least 16 in every game, while Goodlett has been in double figures five times with a high of 33 in a tough win against Albemarle. Point guard Derrick Page has been limited by an ankle injury, but is another capable senior. Sophomore Kendrell Goodes is an exciting shot-blocker/dunker. The Cavaliers throw a lot of quickness on the floor.

No. 3 Salisbury (5-2) — It’s been frantic so far for Salisbury, which has just two veterans who played major roles on the awesome team that lost a thriller to Carson in last year’s tournament championship game. The experienced guys for coach Bryan Withers are senior point guard Cam Gill and junior scorer Zay Kesler. Salisbury is still figuring out its rotation and defense and had to dig deep to pull out its last two games before the tournament against Ledford and Central Davidson.

No. 4 East Rowan (5-4) — Coach Kurt Misenheimer has one of the county’s top players in 6-foot-7 senior Elton Hooper, who had 29 points and 18 rebounds in a 54-49 loss to Davie in Granite Quarry. Other than Hooper, East doesn’t score a lot of points. The second-best offensive threat has been senior point guard Gabe Hinceman. The Mustangs own several good wins but lost 57-31 to A.L. Brown in their last pre-Christmas outing.

No. 5 North Stanly (3-3) — Childress is the reigning Yadkin Valley Conference Player of the Year in a league that includes North Rowan and Albemarle. That tells you something. He’s small, but he averaged 22 points per game as a junior and is weighing college offers. Carson Lowder is the No. 2 scoring option for the Comets, who are directed by first-year head coach Paul Childress, the former Albemarle star.

No. 6 Carson (3-7) — It’s a rebuilding season for the Cougars who lost four starters from the team that won last year’s Moir title for coach Brian Perry. Senior Cole Perry, the coach’s nephew, has returned from ACL surgery well ahead of schedule and has put up 22 and 23 points against competent Cabarrus clubs. EJ Clark, a junior  forward getting his first varsity opportunity, has fared well. A lot of new faces have shown flashes, but they’ve been inconsistent. Carson has faced a challenging schedule, including Davie and unbeaten A.L. Brown (twice) and may be better than its record suggests.

No. 7 South Rowan (1-5) — South made nice strides last season under coach Andre McCain, but the Raiders graduated all five starters from a seven-win team. Andrew Jones, Brenden Finger, Jarron Hines, reserves last season, and newcomer Braden Graham have been the Raiders’ top players. South has scored in the 40s in all six games.

No. 8 West Rowan (0-9) — West, which relied heavily on Caleb Mauldin last year, struggled mightily at the start of this season, losing by landslides in its first two outings. The Falcons have competed better for coach Mike Gurley since then, although it’s been tough for them to put together four good quarters. Senior Payne Stolsworth  can shoot and topped 20 points in four straight contests,. Zack Brawley, Jay Joseph and Jeriah Ford have enjoyed good outings. The schedule has been extremely difficult,  Davie once, plus double doses of North Rowan, A.L. Brown and Lake Norman. Those four teams are a combined 24-2.