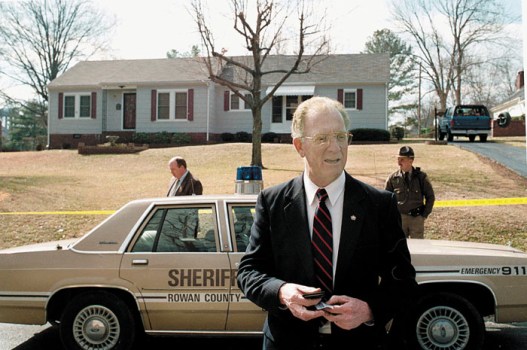 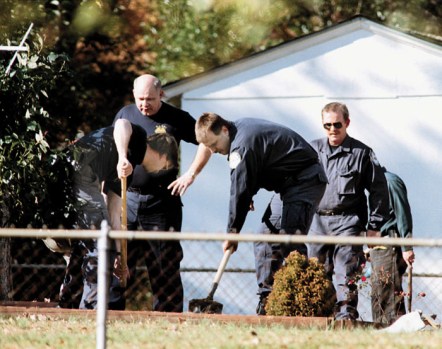 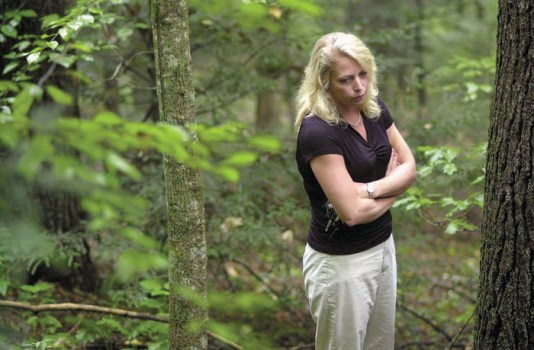 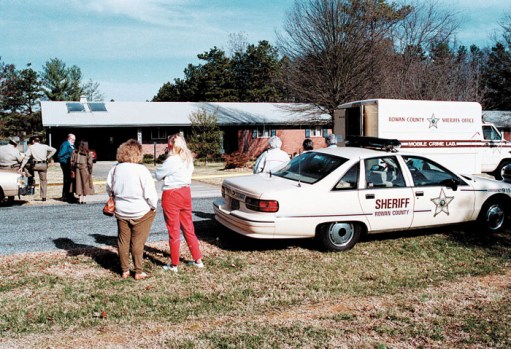 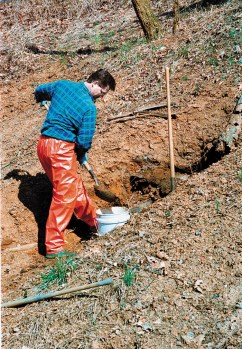 Rowan County Deputy Terry Agner digs near the shooting range at the Rowan Peace Officers Club looking for bullets in the investigation of the deaths of Catherine Miller and Viktor Gunnarsson on March 19, 1994. Wes Miller/Salisbury Post file photo

SALISBURY — A former Salisbury police officer who was convicted more than 20 years ago of kidnapping and killing his former girlfriend’s new boyfriend, has died in prison, the N.C. Department of Public Safety confirmed.

The December 1993 murder of Swedish extremist Viktor Gunnarsson was discovered after 77-year-old accounting clerk Catherine Miller was found dead with two gunshot wounds to the head. After Miller’s daughter, Sandra Weden, learned of her mother’s death, she got no response from Gunnarsson, her new boyfriend. The only connection between the two, Weden said, was L.C. Underwood. 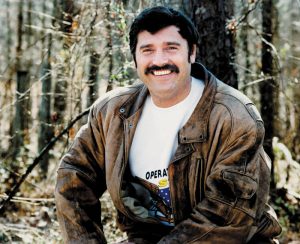 Gunnarsson’s body was found shot, naked and dumped off the Blue Ridge Parkway. Animals had mutilated the body, which was discovered underneath snow by an N.C. Department of Transportation worker who was surveying the area for a construction project.

Watauga County investigators identified the body as that of Gunnarsson, who had been reported missing from Salisbury.

Gunnarsson had ties to the 1986 assassination of Swedish Prime Minister Olof Palme, who was shot and killed while walking with his wife from the movies. Gunnarsson was never convicted of that murder.

The investigation into the murders of Catherine Miller and Gunnarsson spanned four years with both Watauga and Rowan county detectives working leads. Despite other potential suspects, Underwood was always the prime suspect, investigators said.

Investigators found hairs traced to Gunnarsson inside a vehicle that belonged to Underwood.

Underwood always maintained his innocence and appealed his 1997 conviction. The courts denied his appeal, citing overwhelming evidence against him.

The State Bureau of Investigation’s Northwestern District and Southern Piedmont District investigated the Gunnarsson case along with the sheriff’s offices in Rowan and Watauga counties.

In 1993, David Ramsey was working in the SBI’s Northwestern District office, which covered Watauga County. Ramsey, now a Rowan County Sheriff’s Office deputy chief, said it was one of the highest-profile cases ever in the two districts and there was a lot of anxiety, primarily because Underwood was a Salisbury police officer.

“Although Underwood was never charged in (Catherine Miller’s) death, there was an abundance of evidence that he was the person responsible,” Ramsey said. “A decision was made not to prosecute Underwood and possibly jeopardize his conviction and the life-plus-40-year sentence he received in Gunnarsson’s murder in Watauga County. There was outstanding work done by state and local law enforcement to bring Underwood to justice, and the case survived numerous appeals by Underwood.”

In 2004, then-Salisbury Post crime reporter Jonathan Weaver wrote a five-part series about the murder, which included interviews with Underwood, investigators and Sandra Weden.

Weaver said the thing he remembers about his interview with Underwood is how little he himself talked during the interview. Weaver visited Underwood in a tiny room at Pasquotank Correctional Institution for several hours. Underwood was clearly prepared for the discussion with the reporter and had numerous legal pads with details of the case, Weaver said.

Much of Underwood’s conversation with Weaver was the veteran officer recounting how he believed the evidence was planted and that he was innocent. Underwood was not pleased with the Post stories, Weaver said, and he sent the reporter a lengthy handwritten rebuttal.

When the crimes occurred, Weaver had just graduated from high school, but he recalls that the murders were a major topic of conversation in the community.

He said there were some people in the community who asked why the newspaper dredged up the case after so long. Weaver said the fact that Underwood developed a website that outlined the case, as well as the appellate filings and the fact that the key people involved all agreed to interviews, were reason enough for the stories.

“I mean, this story would fit right in with the Netflix crime documentaries that are so popular right now. As with any story, there were many things that had to be left out due to time, space, etc., but overall I felt like it presented the case and its unreported developments in a somewhat interesting way,” Weaver said.

Weaver said he hopes those still living with the memory of the murders will now find some closure.