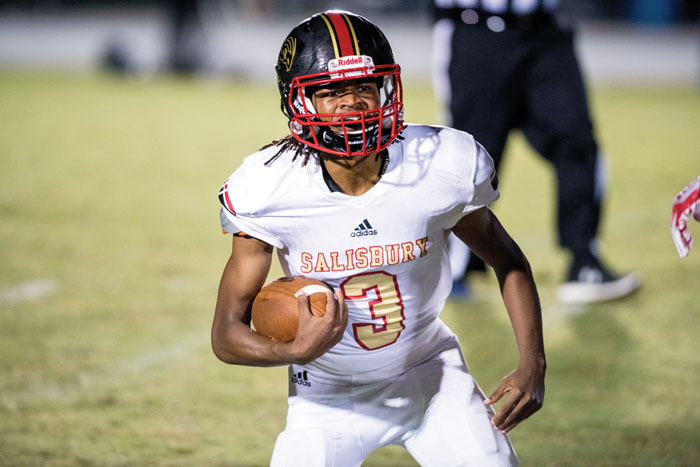 SALISBURY — There was a night in mid-September at Salisbury’s historic Ludwig Stadium that defied belief.

West Davidson was providing the opposition, and Salisbury senior Cam Gill, a lightning-quick DB/receiver/returner turned in one of the epic games in county history.

Gill picked off three passes. He also scored three touchdowns in a 48-18 Central Carolina Conference victory. He had a punt return touchdown, returned a fumble on a kickoff for a touchdown and scored on an interception return. He had 303 return yards and was the NCHSAA’s athletic performer of the week.

Gill would’ve scored on a pass reception against the Green Dragons as well, but that long jaunt was called back by a penalty.

“That was the best night I’ve ever had and it felt great,” Gill said. “I kept seeing the gaps and just tried to put some points on the board every time I touched the ball. Guys made great blocks for me.”

Gill had an amazing season, scoring seven of his nine touchdowns on defense or special teams. Next year it may be a punter or kicker, but Gill is an easy choice as  the Post’s first Rowan County Special Teams Player of the Year.

A week after his performance against West Davidson, Gill was the deciding factor against Lexington. He returned a punt and a kickoff for touchdowns in the first half of a 40-13 victory.

“There were times when we struggled on offense and times we struggled on defense,” Salisbury coach Brian Hinson said. “But on special teams, Gill made a  lot of things happen. When he touched it, you held your breath, because there was always a chance.”

Gil had a pick-six against Central Davidson, making it three straight weeks he scored when the Hornets weren’t on offense.

The exclamation point on Gill’s season was a 99-yard kickoff return TD against eventual 2A state runner-up North Davidson. Salisbury lost 49-13, but for one play, at least, Gill thrilled the home crowd by blowing by Black Knights.

“North Davidson had a really good kicker and he was putting the ball in the end zone all night,” Hinson said. “The one time he didn’t get it to the end zone, Gill took it all the way back.”

Gill (6-0, 165) currently is a starting guard for Salisbury’s basketball team.

He didn’t play football until his junior year, but he made up for lost time.

“He exceeded all expectations,” Hinson said.