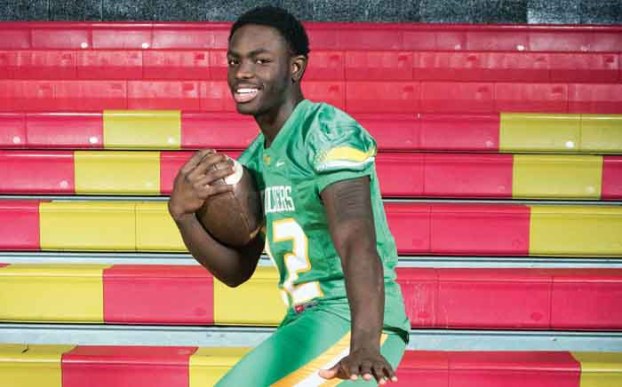 “We could see on film how special Wilson is,” North Stanly coach Scott Crisco said. “We put in a few new things to try to deal with him.”

Wilson was slowed a few times but never stopped. He never had an unproductive game. In the race for Rowan County Offensive Player of the Year, Wilson’s consistency made the difference. He had at least 90 rushing yards in every game, and usually a whole lot more.

The other contenders — East sophomore back Sammy Pinckney, West Rowan junior receiver Jalen Houston and West senior quarterback Payne Stolsworth — produced some tremendous outings, but they were shut down occasionally.

Pinckney rushed for 1.304 yards in 10 games. Stolsworth threw for 1,946 yards and 20 touchdowns, while Houston grabbed more than 900 receiving yards and scored 17 touchdowns on receptions, rushes and returns.

Wilson amassed 1,820 rushing yards, 314 receiving yards and scored 25 touchdowns. He rushed for 9 yards per carry.  That separated him from every other back in the county.

Wilson’s campaign ranked as the ninth-best rushing season in Rowan history and the second-best in North history. JaReke Chambers rushed for 2,018 yards for the Cavaliers in a 14-game season in 2013.

Wilson’s 1.723 rushing yards in North’s first 11 games were the most ever by a Cavalier in a regular season.

In a single year, Wilson went from being the No 2 guy in North’s backfield to being the most feared offensive force in the county.

As the understudy to 2017 Rowan County Player of the Year Jaleel Webster, Wilson rushed for 523 yards and scored 11 touchdowns as a sophomore.

“As a freshman, Malcolm was still developing, “North coach Ben Hampton said. “As a sophomore, he paid his dues behind a very good running back. This year, he knew it was his time.”

Wilson made this season happen with the time he put in during the off-season.

“That’s when I did the work that changed everything,” Wilson said. “The difference between me as a sophomore and me as a junior was 20 pounds, from 160 to 180.”

That extra 20 gave Wilson some options. He could still juke defenders, but now he could also run through them. There were carries when he broke five tackles.

Polk County coach Bruce Ollis’ team beat the Cavaliers in the playoffs, but he said Wilson was as good as anyone he’d ever seen when it came to getting positive yards when there was nothing there.

Wilson rushed for 173 yards against Salisbury on opening night. Against Carson, he romped for 221 yards on 18 carries.

He found the end zone four times at South Stanly  and rushed for 256 yards on 17 carries at Chatham Central.

He produced his third 200-yard game of the season against West Montgomery and averaged 13.5 yards per carry at South Davidson.

Wilson’s 39-year-old father passed away in late October, but Wilson kept going with performances that were both courageous and breath-taking.

“From the first handoff of the season to the last one, he was our workhorse,” Hampton said. “This is a very special kid, and we hope we can send him off to college next year after another great season.”

Wilson already is preparing for that senior season. The off-season is when he gets things done.

“The goal is 20 more pounds,” Wilson said. “I’d like to get to 200 without losing any speed. I know I can get better. I want to break every record there is.”