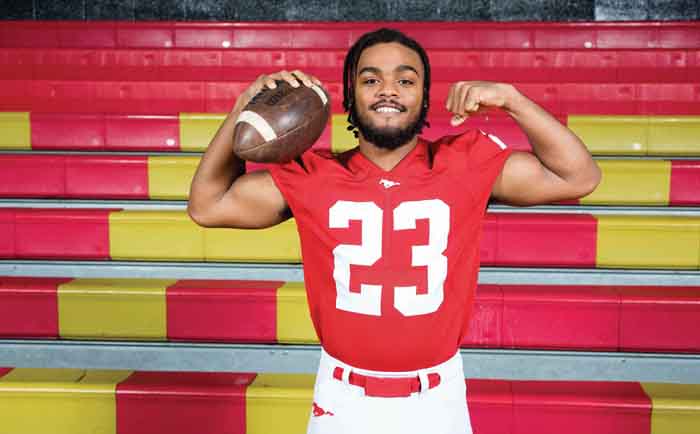 SALISBURY – The evolution of Christian Bennett as an extraordinary high school football player is now complete.

The East Rowan senior just wrapped up a four-year varsity career by being selected as the Defensive Player of the Year on the 2018 All-Rowan County football team. The 6-1, 220-pound outside linebacker had an exceptional season for the greatly improved Mustangs, who finished 6-6 and made the state 3A playoffs. His stellar numbers included 97 total tackles (67 solo), 19 tackles for loss, seven quarterback hurries and four sacks. He also grabbed three interceptions including a pick-6 that keyed a win at North Iredell.

Bennett views his accomplishments not only this season but all four seasons at East as a process.

“It was hard work, but it was definitely worth it,” he said. “After all these years I knew the hard work was going to pay off, but it’s not going to stop now. Nothing is going to change. I am going to keep on going like I always have.”

He has his sights on playing at the next level and rightfully so, not just because of his eye-popping numbers, but because of the intangibles such as his efforts in the weight room, at practice and his leadership by example.

“Christian has done everything we asked him to do and more since his freshman year,” East head coach John Fitz said. “I definitely think he became a better player as he got older and gained more experience. He is obviously very gifted physically and just made himself better each year.”

Bennett found himself thrown into the varsity fire as a freshman just out of Erwin Middle School when injuries to others installed him as a starting linebacker. He responded with a 53-tackle season despite a steep learning curve. What followed were three straight seasons as an all-county and all-conference defensive star, capped by being named the top defensive player in the county this season.

“We had a decent season,” he said of the campaign that started with four straight wins then four tough losses and ended with a chance to play for the North Piedmont Conference championship. The Mustangs lost that game to Statesville, then turned right around and played the Greyhounds again in the first round of the 3A playoffs. East lost a 7-6 heart-breaker when a last second field goal came up just short.

“Our defense came out ready to play,” he said. “But I guess it just wasn’t our time.”

So was Bennett satisfied with his outstanding senior season?

Bennett is far from a one-dimensional athlete or football player. He’s an important role player on the basketball team and an all-county performer in track and field in the shot put and as a member of the 4 x 100 relay team. On the football field, he performs at a high level on defense, offense and special teams. When the Mustangs had the ball he became the power runner when the team needed tough yards, especially in the red zone. His senior season produced 119 carries for 503 yards (4.3 average), 10 touchdowns and six two-point conversion runs.

“Due to all the work I put in during the off season I was able to go both ways and it never wore me down,” he says. “I am used to that type of environment and that kind of stress.”

His work ethic in the weight room made him the top weightlifter on the team with a 485-pound squat, a bench press of 315 and a clean-and-jerk over his head of just over 300 pounds. That same work ethic has paid off in the classroom as an honor student with a cumulative grade point average of 3.91.

With his on-field performances, his off-field hard work and his strong academics, Bennett would seem to be a natural to play at the college level. He just needs an opportunity to show what he can do.

Fitz, a former Catawba College coach and recruiter, knows if a player has the tools to compete and succeed at the college level. He says he is surprised that more schools are not beating down the door to secure Bennett’s services.

“Christian fits the bill in all aspects of a college player,” Fitz said.

He did get an offer earlier this month from St. Andrews University, an NAIA school, but Fitz feels Christian is definitely a Division II or higher prospect with his size, speed, effort and numbers.

Bennett’s older brother, Calvin Edwards, was a star running back at East Rowan and went on to play at Lenoir-Rhyne University.

“Calvin is my big brother and has given me a lot of advice,” Bennett says. “He is a hard worker like me and is someone I look up to. I definitely plan to play football in college and I’m keeping my options open hoping for a chance. It is all about heart and how you play the game.”

In earning the honor as Rowan County Defensive Player of the Year, Bennett is the first Mustang to capture that distinction since 1999.

The last East recipient was Danny Misenheimer, a two-time Rowan County Athlete of the Year and a Shrine Bowl participant his senior season.

Misenheimer later served as East Rowan’s head coach for two seasons and is currently an assistant at West Rowan.