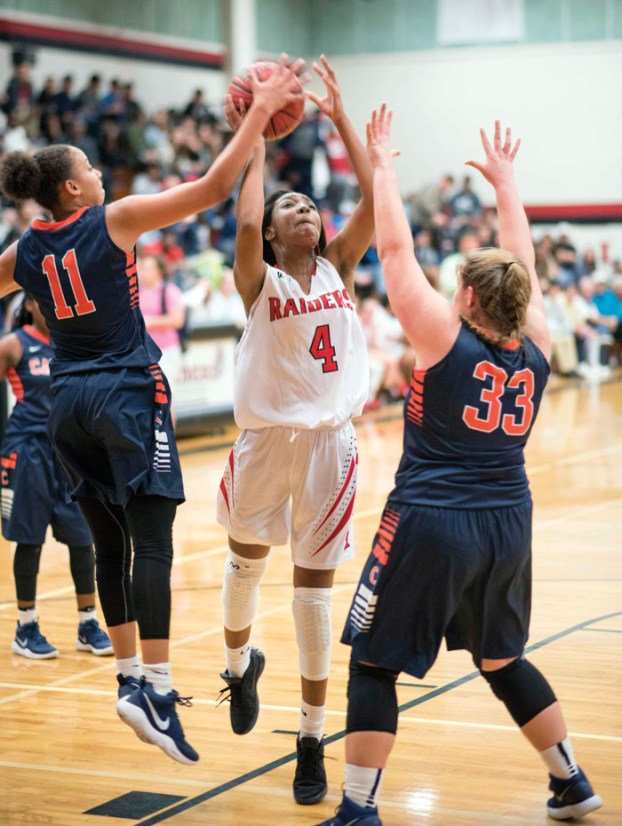 Downs you probably already know a lot about. Thorne, a point guard who can shoot, scored Ledford’s first 27 points in a game last week, and finished with 42.

Those two could form a scary future backcourt in the Division II South Atlantic Conference.

“It’s a puzzle that we’re trying to piece together,” Baxter said. “We’re going to make a run at the SAC. These two girls are going to be ready to play right away.”

A lot of coaches have tried to describe Downs. She’s not a fantastic shooter, but she is a fantastic scorer, one of the best and most consistent in county history. She’s a glider, silky smooth at 5-foot-11. She’s a slasher who can squeeze through the tiniest crack in the defense and get to the rim. She rebounds with surprising tenacity for someone with such a lean frame. She gets fouled a lot, and she makes free throws.

On the basketball court, Downs is a skilled ball-handler and passer, but this season for the third time in her four seasons at South, she has to score a ton for the Raiders to have a chance. She had a strong supporting cast last season for the first time. Seniors Riley Corriher and Tazah Hardin fired in a lot of points, the Raiders went 18-9 under coach John Davis and won a 2A playoff game on the road.

It’s a reasonable question to ask how Catawba was able to sign Downs, but she has her reasons. She’s not an ordinary individual. When she talks about education being a priority over basketball, she means it.

“I had some D-I schools that offered, but I honestly just love Catawba,” Downs said. “I love hanging out with the girls on the team, and they’re already like part of my family. People get caught up in the D-I thing, but it’s not about going to the biggest school that recruits you, it’s about finding the right school. Catawba fits me on and off the court. Yes, I think we can be top dogs in basketball, but you go to college for education first, and I know I can get a great education there while I’m enjoying basketball.”

“We were always big rivals when we played against each other in high school,” Downs said. “But now we’re good friends.”

South’s first-year head coach Stacy Ellis is new to the program, but not to Downs. He’s coached her in AAU ball.

“I know there are people who wanted her to go bigger, but I’m fine with her decision,” Ellis said. “She really needed to go to Catawba. It’s where she felt comfortable, and when you find a place that fits, a place that has that family feel, that’s where you need to be. She should be great on the court for them, and great for the school. This is not just a great player, this is a great person.”

In her first game as a South freshman, Downs scored 28 of the Raiders’ 49 points in a loss to North Rowan.

“She’s been great as far as leading our young kids, mentoring them, helping them, pushing them,” Ellis said. “She brings a lot of leadership to our team. There have been tough games where she just would not let us falter. I’ve got a coach on the floor.”

She missed a series of games with a concussion as a freshman, but she has played 81 games for South in an amazing career and has scored in double digits 78 times. In one of those three games in which she fell short of double figures, she was injured early. In another, she was coming back from that concussion. The third one came as a sophomore when Carson held her to nine points.

Downs has 1,717 points career points as the Raiders (4-3) enter the Dale’s Sporting Goods Christmas Classic at Catawba as the No. 5 seed. Avery Locklear, now a senior at UNC Pembroke, established the South program record with 1,795 points in the 2014-15 season.

“I’ve been lucky enough to make a name for myself at South the last few years,” Downs said. “It would be nice to break the record at Catawba, but if it doesn’t happen, maybe I can do it in our first home game after Christmas.”

There are things that people are still learning about Downs.

For one thing, she actually likes going to the dentist. That puts her in a tiny minority of the population.  She’s considering a career in dentistry.

But first there’s a lot of basketball to be played.

“We love her,” Baxter said. “We’re thrilled that she decided to stay home.”