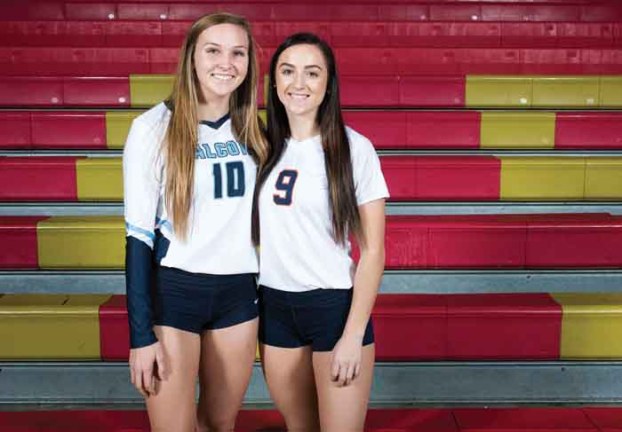 The Post’s Rowan County co-players of the year can temporarily go vertical in amazing, unexpected ways, carrying their teams whenever they’re cleared for take-off.

“Coaching Tori, the best way I can describe it is it’s like having Michael Jordan on your volleyball team,” West coach Jan Dowling said. “Her hang-time is unreal. She can just go up and have a look around. She stays up in the air a while, and then she decides where she wants to go with the ball.”

The 5-foot-10 Hester is one of the most talented — and best — players in county history. That’s two different things because not everyone maximizes their gifts. She does. Her work ethic is off the charts.

Hester probably could be a dynamic basketball, softball or soccer player, but volleyball is her thing. It’s what she loves, what she focuses on, what she dreams about. She’s had 30-something college offers, a lot of them in-state, but she’s given an early verbal commitment to Troy University in Alabama. That’s a long way from home, but the program, the players and the campus felt right.

Hester has an athletic family. Her father, Chip, played college football at Guilford before eventually becoming Catawba’s head football coach for a decade. He’s also the coach who will start Barton’s new football program. Tori’s mother, Trish, was a strong volleyball player at Guilford and was the coach who got Carson’s program started in 2006. Tori’s sister, Morgan, was a player of the year at Carson and is now a starter for Catawba.

Weast may have even more bounce per ounce than Hester. She soars ands scores. She’s only 5-foot-6, but she skied a foot above the net for the Cougars.

“I was actually Weast’s first coach when she was 8 years old,” Dowling said with a laugh. “For her size, to be the kind of hitter she is, it’s nothing short of amazing. Her jump is unbelievable.”

West and Carson have been spirited rivals in the North Piedmont Conference the past two seasons. Carson, the perennial power, has taken three of five meetings, while West, the new kid on the block, has won two.

As the leaders of teams that have had some battles, there’s been a natural perception that Hester and Weast are bitter enemies. That couldn’t be much further from the truth.

“We were on the same travel team together in third or fourth grade, and we’ve been close friends since then,” Weast said. “We played together about five years and played some sand volleyball together. We played against each other in high school because that’s what we had to do, but as much as we both wanted to win, we were only opponents during the match. Once it was over, we were friends again.”

“It’s not like I could ever hate her, win or lose,” Hester said with laugh. “It was just fun competition. It was fun playing against someone as good as Mallory because she brought out the best in me. Both of our teams had great seasons.”

Both teams went 8-2 to tie for first in a dog-eat-dog North Piedmont Conference that had five stout teams.

When West took on Carson in Mount Ulla in September, Hester dominated with 24 kills, 19 digs and five blocks.

In the rematch in China Grove in October, Weast sparked a Carson victory with 17 kills and 17 digs.

Both are well-rounded, versatile players who never left the floor. While they are best known as outside hitters with more than 1,000 career kills, they also can dig with the best. They are strong servers and receive serve well. Both are effective blockers. There’s nothing they can’t do.

“I don’t know that I have a single favorite part of the game,” Hester said. “I like to hit, but some of the most exciting moments are when you make a dig. Someone makes a strong hit, and everyone knows it’s going down, but then somehow you keep it off the floor and the fans go crazy. I love that.”

For Weast, there’s no doubt about what she likes best.

“I loved to hit,” she said. “I loved getting that big kill. I loved the intensity and I loved the teamwork.”

Both were at their best against the stiffest competition.

In an epic second-round playoff match against A.C. Reynolds, one of the biggest victories in West history, Hester had 29 kills and 23 digs and served five aces. In a five-set match at North Iredell, Hester produced 29 kills and 19 digs.

Weast had 20 kills and 16 digs as Carson won the North Piedmont Conference Tournament championship game against South Iredell. In a struggle with Reagan, a strong 4A squad, Weast put up 24 kills and 27 digs.

“Weast was good as a freshman and sophomore, awesome as a junior and senior,” Carson coach Kelan Rogers said. “A fantastic player for 5-foot-5. She always played at a high level, she played with consistency, and she was a leader.”

While Hester’s name is sure to be heard for a while, Weast is ready to depart the limelight. A lot of people have tried to persuade her to play college volleyball, but she’s ready to focus on academics. It’s the same decision that her sister, Madison, a 6-foot skywalker, made a few years ago.

Hester was the county player of the year in 2017 and the 2018 NPC Player of the Year, but Weast richly deserved recognition as well. She was awesome in Carson’s stretch run that included the NPC tourney title and a trip to the fourth round of the 3A state playoffs. Carson (26-4) lasted one more round than West (19-5). Both teams were ranked in the top 10 in the state at the end of the season, with Carson fifth and West sixth.

“Tori is the best player I’ve ever coached and I had players of the year like Taylor May and Kayla Morrow when I was at South Rowan,” Dowling said. “Tori has tremendous skills, tremendous ability.”

Dowling also got in the last word about Weast.

“Mallory was a great competitor, a very tough, but always very classy competitor,” Dowling said. “She’s someone we really enjoyed playing against — but I’m kind of glad she’s gone now.”

Carson and West have five all-county players each.

Carson seniors Grace Thomas and Nancy Gamewell are on the team, along with Jaden Vaughn and Kary Hales, sophomores who will lead the 2019 edition of the Cougars.

West seniors Ava Link and Hannah Pratt are on the squad, along with sophomores KK Dowling and Allison Ennis. Dowling  and Hester will give the Falcons a powerful 1-2 punch next season.

Junior Kira Rymer, sophomore Anna Rymer and senior Janiya Downs led South Rowan to a share of the Central Carolina Conference championship and are all-county. South went 22-6 and made it to the second round of the 2A playoffs for the second straight year.

West’s Carly Stiller and Salisbury’s Madelynn Castor aren’t on the all-county team, but they did make all-conference.

“Volleyball in this county is pretty darn good now,” Dowling said. “It’s been awesome to watch the game grow. Back when I was playing at West, everyone in the county didn’t even have a team.”