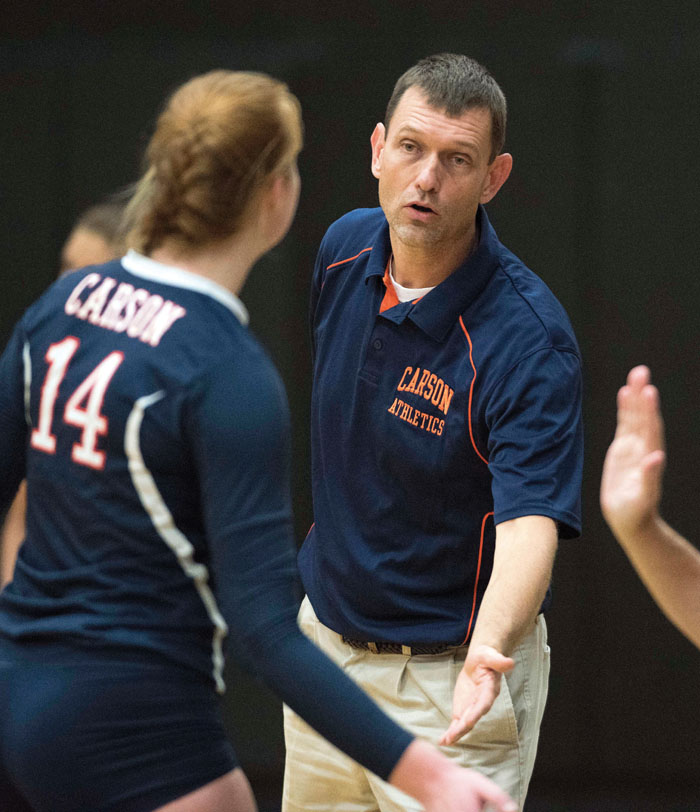 His first opportunity to teach science came at West Davidson High in Tyro in 1990. He also was placed in charge of a downtrodden volleyball program that went 0-14 in the 2A Central Carolina Conference.

He proved a quick study. A year later, West Davidson’s volleyball team was 8-6 in the CCC. Rogers accepted the first of many coach of the year awards.

NCHSAA realignment came in 1993, and with West Davidson’s enrollment down to about 500 students, the Green Dragons were shifted to the 1A Central Tar Heel Conference to compete against schools such as Jordan-Matthews, East Montgomery, South Stanly, South Davidson, Chatham Central and North Moore. West Davidson won its first conference championship in volleyball in 1993. From there, Rogers’ teams started cranking out conference championships, basically every autumn.

For four years — the 1995-96 season through the 1998-99 season — Rogers doubled up as West Davidson’s girls basketball coach, usually coaching his volleyball athletes on the hardwood. His motivational skills made a difference in hoops, too, resulting in a rise from last place to second place, but he loved volleyball more. He wanted to coach it year-round. He dropped basketball.

From 1997-2004, West Davidson competed in the 1A Yadkin Valley Conference and ruled volleyball, which stood tall as the flagship program for West Davidson’s athletic department. It was tough to beat Albemarle and Thomasville in football and basketball, but no one could touch West Davidson in volleyball. Rogers guided two squads to regional finals, including the 2002 team that went 34-1.

In 2005, after a dozen years in 1A, Rogers and West Davidson returned to the 2A ranks and the Central Carolina Conference.

West Davidson and Ledford split and shared the 2005 CCC title. But in 2006, 2007 and 2008, West Davidson went 38-0 in CCC games and steamrolled to three straight championships. Rogers was the league’s coach of the year in 2006 and 2008. His final match as West Davidson’s coach was a second-round playoff loss at home to North Surry in 2008.

In 2009, seeking a new challenge, Rogers returned home to Rowan County as a biology teacher and volleyball coach at Carson.

Carson opened in 2006. Coach Trish Hester started the program from scratch, and the Cougars were decent in volleyball before they were in many other sports.

In 2009, Rogers debuted by leading the Cougars to a third-place finish in the North Piedmont Conference behind perennial powers West Iredell and North Iredell. Participating in the 3A state playoffs for the first time, Carson went on the road and beat Marvin Ridge in the first round. A loss in the second round to Charlotte Catholic ended Carson’s breakthrough season at 22-6.

South Rowan had been the county’s best program for quite a few years under coach Jan Dowling, but that 2009 season is when the balance of power swung toward Carson. South’s Kayla Morrow and Carson setter Taylor Whitley shared the county player of the year award. Whitley was the first Cougar to be honored. Morrow was the last Raider to be honored.

Rogers’ teams have won 250 games in that span. The math on that is easy. His teams have averaged 25 wins per year. Twenty-two of his wins at Carson have been in playoff games.

“We’ve built a program where the girls expect to win,” Rogers said. “They work hard, and I’m convinced that the work and the time they put into volleyball is going to help them as they go through life. A lot of these girls are going to do great things.”

Rogers surpassed 500 career victories way back in 2012. They keep piling up.

“Kids that play four varsity seasons here win 100 games,” Rogers said. “When people talk about the top volleyball programs in North Carolina, Carson is one of the teams they talk about.”

Rogers’ goal, of course, is to play in another state championship game.

There are a couple of factors that may help that happen.

There’s also the fact that the Cougars have a legitimate rival now, a neighbor to push them. As was the case in Rogers’ early years at Carson, the challenge comes from Dowling, but it comes from a different location. Dowling, a West Rowan graduate, has been the head coach of the Falcons the last four seasons. West was 6-17 her first year, but the Falcons improved to 14-12 in 2016, to 20-7 in 2017, and to 19-5 this season.

West tied Carson for first place in the NPC this year with an 8-2 record, the first league title for the Falcons since 1995. West beat Carson once in three meetings in 2017 and split with the Cougars this season.

The programs are very close right now in terms of varsity talent. West junior Tori Hester, Trish’s daughter, is a phenomenal player, one of the best in county history. She was the solo player of the year in the county in 2017 and shares the award this time with Carson senior Mallory Weast. Hester also was voted North Piedmont Conference Player of the Year.

Whether West Rowan can maintain that lofty level of play, year after year, as Carson has done, is a question that only time can answer.

There’s little question that Carson is going to be a factor as long as Rogers is around. He’s constructed a dynasty.

Dowling was named North Piedmont Conference Coach of the Year by her fellow coaches and directed her team to the third round of the state playoffs before losing to eventual state champion Marvin Ridge. Even with setter Ava Link out, West gave Marvin Ridge as tough a match as anyone did on its march through the playoffs.

Rogers is the Post’s choice as Rowan County Coach of the Year, mostly because Carson added the North Piedmont Conference Tournament championship to its regular season co-championship. That tournament victory enhanced Carson’s playoff seed, and the Cougars were able to take three home playoff games before losing in Round 4 at West Henderson.

South Rowan wasn’t nearly as powerful as Carson and West Rowan, but at the 2A level the Raiders were stout. Coach Jenna Horne was runner-up for Central Carolina Conference Coach of the Year after guiding South to a 22-6 season and a 16-2 mark in the CCC. South claimed a share of  the first regular-season championship in school history, tying for the top spot with Ledford and West Davidson.

Almost three decades after Rogers got things rolling, volleyball remains the No. 1 sport at West Davidson. Coach Michael Green, a close friend of Rogers, led West Davidson to a runner-up finish in 2A.