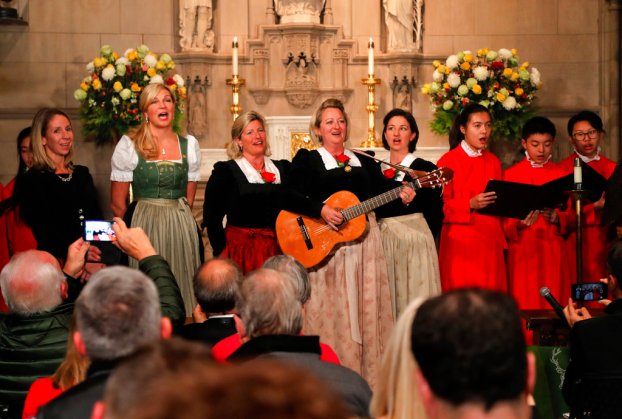 The Kroell Family Singers, center, sing "Silent Night" with the Choir of Trinity Wall Street and Trinity Youth Chorus during a celebration of the anniversary of the song at Trinity Church in New York. Written and sung in Austria in December 1818, the song was first performed in the U.S. in 1839 at the Hamilton Memorial on the church's grounds by an Austrian family of traveling singers. (AP Photo/Julie Jacobson)

‘Silent Night’: How a beloved Christmas carol was born of war and disaster 200 years ago

On Christmas Eve in 1818, two men with a small guitar entered a church in Oberndorf, Austria, and prepared to sing a new Christmas carol.

Times had been bad in Oberndorf, where many people worked on the water, manning the salt barges that plied the Salzach River. The upheaval in central Europe caused by the Napoleonic Wars had just ended.

And only two years before, the dreadfully dark summer of 1816 – later blamed on ash from a volcanic eruption in Indonesia – had caused famine and deprivation.

But in that fall of 1816, a young Catholic priest, Joseph Mohr, had written a six-verse Christmas poem that began “Stille Nacht, Heilige Nacht” – Silent Night, Holy Night – about the Nativity of a curly haired Jesus.

Two years later, Father Mohr enlisted a friend, Franz Xaver Gruber, a local schoolteacher and musician, to come up with a melody for the poem that could be played for Christmas on the guitar. (Legend has it that the church organ had been damaged by mice or water and was on the blink.)

Gruber’s composition is thought to have taken about a day.

Now, as the two men put the words to music that Thursday 200 years ago in Oberndorf’s St. Nicholas Church, they voiced for the first time what is probably history’s most enduring and beloved Christmas carol.

All is calm, all is bright…

“It’s such a part of the general soundscape of Christmas,” said Sarah Eyerly, assistant professor of musicology and director of the early music program at Florida State University’s College of Music.

“Often times when songs are composed by people in times of great stress, there’s something quite human about them,” she said. “And that often resonates with people outside of that particular geographic location, or culture or time period.”

Since 1818, “Silent Night” has been translated from German into hundreds of languages. There are about a dozen different translations just in English, with an 1850s version the most widely accepted, Eyerly said.

The carol has spawned TV shows, a cartoon, a documentary. On the Western Front in 1914, during World War I, it was sung during the spontaneous “Christmas Truce” between allied and German soldiers who had been slaughtering each other hours before.

It’s been performed by rap musicians, Bing Crosby and the Mormon Tabernacle Choir.

There are gospel and heavy metal versions.

Yet it is the intimacy of the words, the scene and the music for the small parlor guitar that has soothed listeners for two centuries.

“Mohr was a guitarist,” Eyerly said. “Guitar is a much more approachable folk instrument than an organ, and for a song in this style … it would be much more common to play it on a plucked string instrument like a guitar.”

The two men probably sang it as a duet, with Mohr playing, a la Simon and Garfunkel, who did a haunting version in 1966, called “7 O’Clock News/Silent Night.” In that version, the carol is sung to the piano over the background of a grim 1960s newscast.

Why Mohr didn’t just write the melody himself is a mystery.

“He was a really gifted violinist and guitarist,” Eyerly said.

But Gruber chose a special musical style, called Siciliana, for the melody, she said. “It’s an Italian song form that was really popular in the 17th and 18th centuries. It’s meant to mimic the sound of water. It’s associated with gondoliers in Venice, or Italian fishermen … (But) why that style?”

“I really think that it’s because most of the congregation that were listening that evening were workers on the river,” she said. “They were either ship captains or ship workers. … I can’t prove this, but this is my analysis of the piece … that it mirrored the soundscape of water and it links to people’s daily lives.”

The carol spread quickly across Europe. It was bought to the United States, where, some accounts say, it was first performed on Christmas Day, 1839, in the churchyard of New York’s Trinity Church, Wall Street, by a troupe of traveling Austrians, the Ranier Singers.

The carol was translated into English in the 1850s by an Episcopal priest at Trinity, John Freeman Young. He published it in a book of Christmas carols in 1859. He translated the first, third and sixth verses, and did a fairly good job, given the literal German of the song, Eyerly said.

Which roughly translates into English:

Everything is asleep. Only the faithful holy couple are awake, alone.

And Young smoothed it into the classic:

All is calm, all is bright

Round yon virgin mother and child

Holy infant, so tender and mild

Young dispensed with Jesus’ curly hair, but added the folksy, “yon” and called the child “tender and mild.”

Along with the carol, Mohr’s elegant six-string guitar has also endured for two centuries, according to the Silent Night Association.

For a time, it hung in a tavern and later, during World War II, was sheltered in a salt mine to protect it.

It was brought to the United States, along with an early manuscript of the carol, in the 1960s and came back for a cross-country tour during the Bicentennial in 1976.

It’s now reportedly on display in the Silent Night Museum, in Hallein, Austria, on the Salzach river about 20 miles south of Oberndorf.

Michael E. Ruane is a general assignment reporter at The Washington Post who also covers Washington institutions and historical topics.

Area ministers and community leaders have selected Mrs. Elizabeth Cook and the Salisbury Post newspaper for outstanding service for over... read more