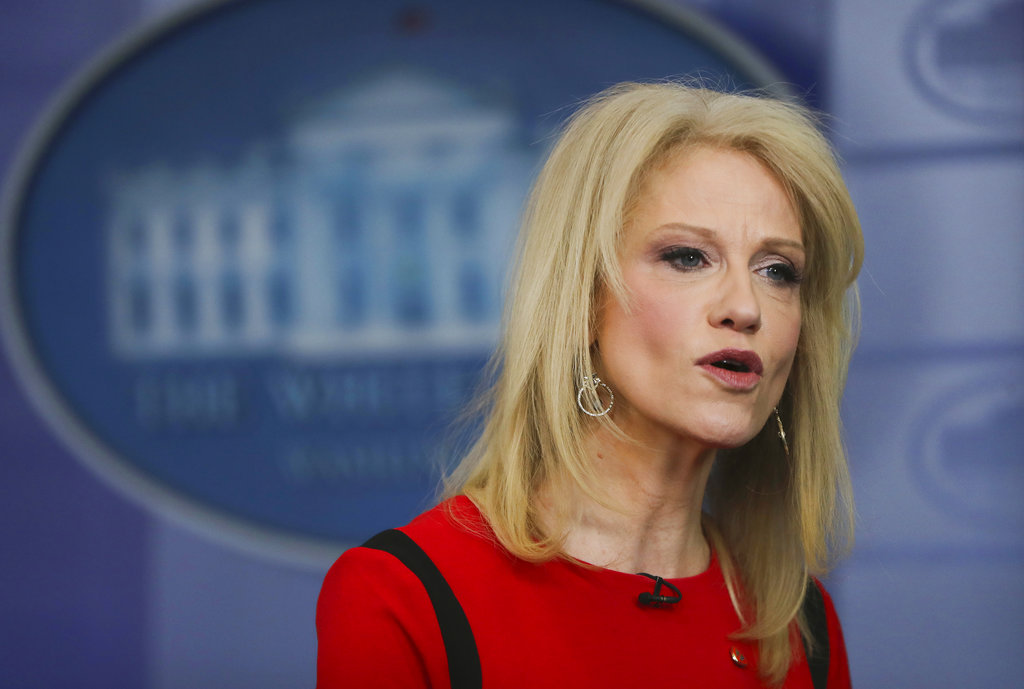 In this March 23, 2018 file photo, Counselor to the President Kellyanne Conway speaks during a media interview in the White House Press Brady Press Briefing Room in Washington. Asked if the president would back legislation in the works that would keep government funded, likely into February, Conway said Trump will “take a look at that certainly.” AP photo

What do you get someone who has everything – especially if the someone is really an entire country? Here’s the list:

• Mainstream TV news outlets can give the gift of truth. That entails Kellyanne Conway-less coverage, and an end to live coverage of Sarah Sanders press briefings. No Trump flunkies on panels for the sake of “balance” if they have signed non-disclosure agreements and/or insist on lying.

• Senate Republicans can give the gift of courage. They should call out President Donald Trump’s lies, conduct real oversight, reassert their war-declaration powers and force floor votes on bipartisan measures. And most of all, they should seriously consider when the time comes removing Trump from office if the House impeaches – or at least not supporting him in 2020.

• House Democrats can give the gift of restraint. By moving carefully, following the facts and prioritizing their objectives they can avoid looking like partisan inquisitors as the Republicans did on Benghazi. On legislation, they should shoot for the center (e.g. repairing the ACA) and not cater to the extremes (e.g. Medicare for all), which would only provide Senate Republicans with a justification for ignoring their bills.

• The federal courts can give the gift of consistency. Time and again (on sanctuary cities, blanket denial of asylum claims and the First Amendment, to name a few) the courts have asserted their power as a check on the two other branches. Judge Emmet Sullivan showed that judges are not rubber stamps for the parties (the executive and a private system) but rather have the responsibility to exercise their judgment.

• The field of 2020 Democratic presidential candidates can give the gift of moderation. The danger of getting dragged further and further left, to a place where they become unacceptable to all but Democratic hardliners, is a risk. The winner will have to face Trump or another GOP nominee whose first line will be that the Democratic nominee is a wide-eyed socialist.

• Fox News executives can give the gift of decency. No more race-baiting, no more harebrained conspiracy theories, no more fear-mongering about immigrants and no more fueling the white grievance machine. Putting blatant racists on air who complain they don’t recognize America or who call immigrants “dirty” is beyond the pale. As a bonus they might consider requiring all on-air talent (not just Shepard Smith and Chris Wallace) to practice journalism, not PR for the White House.

• Governors, Democratic and Republican alike, can give the gift of creativity. Use their powers to litigate and to legislate to let a thousand good policy ideas bloom. Now more than ever we need the laboratories of democracy to turn out practical solutions on work, education, health care and more. See what works, and what doesn’t.

• The Niskanen Center, a thinking person’s think tank, can give the gift of sanity. Its blend of pragmatic solutions and elevation of small “d” democracy is a welcome and necessary addition to political debate — while the Republican Party spins into intellectual oblivion.

• Potential GOP primary challengers to Trump can give the gift of integrity. Call out the lies, the cruelty, the incompetence, the extremism and the corruption. Then offer a sensible center-right vision and speak in a presidential tone. If you fail, at least you’ve shown how to make an effective case against Trump and what politics could be without him.

• Americans can give one another the gifts of kindness and compassion, providing the thousand points of light President George H.W. Bush extolled. America is more than its worst presidential administration.