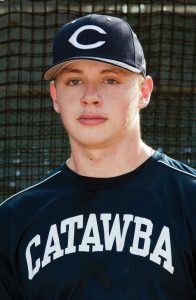 Dula, 26, is getting a shot with the Milwaukee Brewers, who announced his signing last week. The right-hander’s fastball was clocked at 102 mph last summer when he played for the Utica Unicorns, an independent club in the Michigan-based, four-team United Shore Professional Baseball League.

Dula, a South Iredell High graduate and former Mooresville American Legion fireballer, was a tremendous player in his three seasons at  Catawba — but not as a hurler. He was a power-hitting corner infielder.

Dula was the SAC Freshman of the Year in 2011, batting .377 with nine homers and 62 RBIs in 53 games. While he had a strong background as a hurler, injuries limited him to hitting for the Indians. He pitched five exciting but unsuccessful innings for Catawba as a freshman, walking seven, hitting two and tossing one wild pitch.

He didn’t pitch at all for Catawba as a sophomore or junior.

“He was an athlete — he could really run,” Catawba coach Jim Gantt said. “There was always lightning in his arm, but you just never knew where it was going.”

Dula slumped a bit at the plate as a sophomore, but he still hit 11 homers.

Then he produced a monster junior season, blasting 14 homers, batting .402 and driving in 54 runs in 50 games. That season earned him first team All-America accolades in Division II. He was the South Atlantic Conference player of the year for baseball, as well as the SAC Male Athlete of the Year, an award that included all sports.

Never afraid of the big moment, in each of his three seasons with the Indians, Dula launched a grand slam. He batted .344 for his career. His 34 homers, 51 doubles and nine triples were all good enough to make Catawba’s all-time leaderboard.

Despite the gaudy offensive stats, major league teams were more intrigued by Dula’s arm than by his bat.

The Texas Rangers took a flyer on him in the 25th round of the 2013 draft. Dula passed on his senior college season to sign.

Dula bounced around the lower levels of the Texas farm system from 2013-16. He pitched briefly in advanced A ball, but mostly he fired pitches for the Hickory Crawdads, one of the Kannapolis Intimidators’ foes in the Class A South Atlantic League.

He pitched 82 innings in 70 minor league appearances, went 2-2 and cashed in only two of eight save chances. There were 84 punchouts in those 82 innings, but there also were 67 walks, 22 hit batsmen and 25 wild pitches. His also allowed 76 hits. His ERA was an ugly 5.38.

Dula was released by the Rangers in the spring of 2017. No one else jumped to sign him.

In 2017, he pitched a handful of innings between the Atlantic League and the Frontier League, independent leagues not affiliated with MLB organizations. It didn’t go well. He walked 11 and hit four, while striking out six.

But something clicked for Dula last summer with the Unicorns.

His stats still weren’t great— 49 strikeouts and 39 walks in 31 innings with a 5.23 ERA — but his increased velocity was staggering. In the USPBL All-Star Game, his fastballs averaged 99 mph and he set a league record with that 102 mph clocking. He was named co-MVP of that all-star event.

“The USPBL allowed Dula to have time to work through aspects of his pitching delivery that had previously led to inconsistencies with command during his career,” stated USPBL director of baseball operations Justin Orenduff. “Dula has possibly the best arm we will ever see in the USPBL, setting and breaking his own velocity records time and time again with a fastball that exceeds 100 miles per hour. He now leaves the USPBL with a new opportunity in the Milwaukee Brewers organization.”

Dula received plenty of positive video hype on Twitter from Rob Friedman, a self-taught pitching guru whose PitchingNinja account has more than 100,000 followers. Social media was definitely a factor in Dula being signed by the Brewers.

Dula signed a minor league contract, but it’s a contract that includes an invitation to Spring Training.

For Dula, a nice guy who is easy to cheer for, it’s a second chance to chase a dream.

At the very least, he’ll be assigned to one of the Brewers’ farm clubs after Spring Training.

Best case, he harnesses that 102, and he’ll be back on track to the big leagues after a lot of detours.