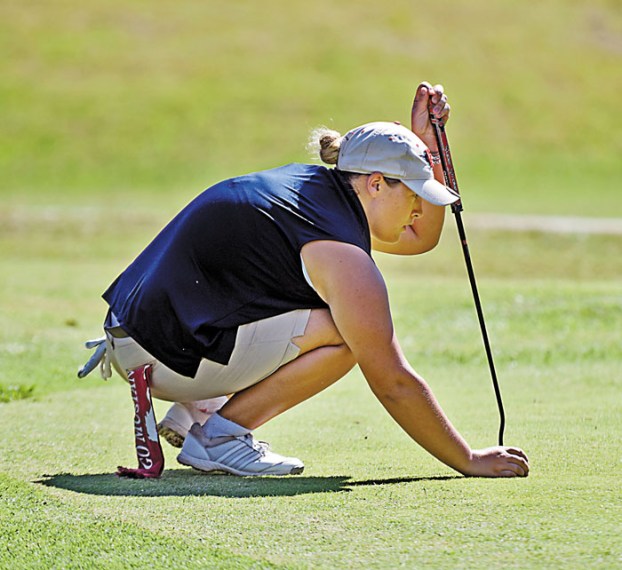 Wayne Hinshaw file photo/for the Salisbury Post ... East Rowan’s Carmen Fraley lines up a putt during the county championship at McCanless Golf Club on Oct. 4. Fraley is the All-County golf team’s Player of the Year for the second straight year. 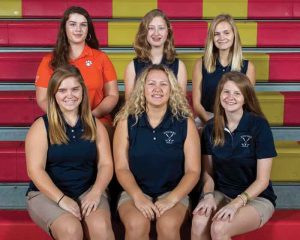 The Mustangs won the county tournament at McCanless Golf Club by 62 strokes over runner-up Carson (261-323).

Led by seniors Carmen Fraley and Camryn Corriher, the Mustangs went on to place third in the 3A Central Regional, making the state tournament as a team for first time. East finished 10th at the state event.

Fraley led the way and repeats as the all-county team’s Player of the Year. She and Corriher actually tied with 84s on that day at McCanless and both carded 82s at the regionals, played at Greensboro National.

But Fraley performed better at the state tournament at Longleaf in Southern Pines, shooting 91 and 94, as well as having the lowest scores throughout the North Piedmont Conference season. Fraley was the NPC Player of the Year as well.

Fraley and Corriher are friends and the healthy competition undoubtedly made them both better golfers. Corriher is a four-year member of the all-county team, having made the team in 2015 as a freshman.

After years of travel-team softball and playing basketball, Fraley decided in 2016 to “try something new.” Carmen’s father, Bill, bought her some new clubs and she caught the “golf bug.”

As a sophomore two years ago, Fraley finished second in the country tournament at the Country Club of Salisbury to champion Micah Furr of Carson. That set the stage to winning the county event in 2017 and being co-medalist this year.

“It feels great to repeat,” said Fraley. “That was what I was hoping to do, as soon as I finished last season. I just kept working and practicing, trying to get better.”

“It was very satisfying to finish 10th at the state and just taking a team there for the first time ever was big deal,” added Fraley. “That was a great accomplishment for our school.”

As far as her game, Fraley improved from 2017, in order to repeat as the county’s top golfer.

“Definitely, my short game and putting improved this season, and that’s what I focused on when I practiced,” she said. “Sometimes, my drives would get out of hand and I’d go get a lesson from Brian Lee (golf professional at Warrior Golf Club).”

Several small colleges have shown interest in Fraley, mainly Montreat, located in the North Carolina mountains. She plans to visit the campus near Asheville in January.

“I’m going to try to play college golf,” continued Fraley. “Montreat has my interest up, but I haven’t made a decision yet. And I’ve thought about Catawba, possibly walking on there.”

In the spring, Fraley plans to return to the softball field for the Mustangs, after taking off last year to concentrate on golf. She has played third base in past seasons.

Fraley also does her share of hunting and fishing with her father.

“I’m very close with my parents (Bill and Kim) and sister (Candace),” added Carmen. “My parents have definitely led me to where I am today. I couldn’t have done all of this without them.”

NOTE: Carson’s Sophia Brown shot a 93 at the county tournament and is the only non-East Rowan golfer to make the all-county squad. Brown was also all-county in 2017. … Teems is the Coach of the Year once again.