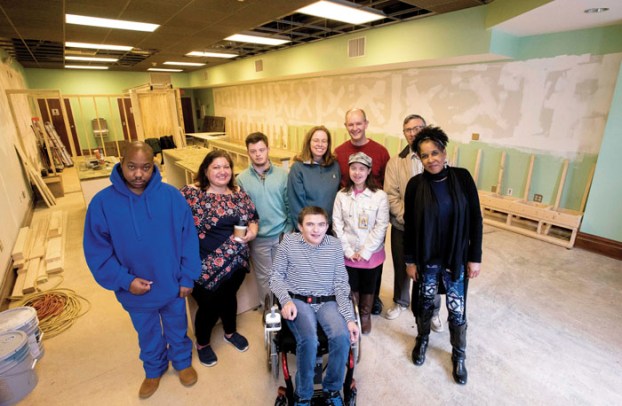 Medina plans to open the new location in mid-January and will offer jobs to people with special needs. She is partnering with Skills, Opportunity, Awareness, Readiness, a Rowan-Cabarrus Community College program designed for adults with intellectual disabilities.

“I strongly believe that everybody in our community needs space where they can find themselves, to be productive to be part of the community, to feel like they have a sense of belonging,” Medina said. “And sometimes, some of the people call them disabled. I call them ‘better abled.’”

“Sometimes they don’t have that sense of belonging or that sense of I’m contributing,” she said. “If you think of the first time you tied your shoes and that pride you got or the first time you drove yourself to school when you got your driver’s license, sometimes the special-needs adults, they don’t have that in their life. There’s no reason why they shouldn’t, because they’re quite abled.”

Lisa Black’s son Nicholas has a hearing impairment and is confined to a wheelchair. She said it’s meaningful for the special-needs community to have a place in the workforce.

“As a parent, one of the things we strive for is we want the same for our children as any other parent wants for their children,” Black said. “Sometimes that means thinking in a different way and presenting opportunities that will work. Everybody has a gift. Everybody has a talent, and it’s tapping into those skills and talents in the best way possible and looking beyond a disability and seeing the ability.”

Medina said partnering with SOAR was an obvious choice. Her brother has cognitive disabilities and is in the SOAR program.

“Having lived with Harold all my life, I can tell you one thing: His room is full of certificates of employee of the year, never having missed a day of work, always on time, always gotten his tasks done. They really are the most employable people,” she said.

“We’ve been wanting to come downtown for a while, but it hasn’t been possible for many reasons,” Medina said. “One of which was the expense. Pete Bogle, who bought this building a few months ago, said to me. ‘If I buy this building, would you consider opening up an additional store or moving your store to down here?’ He has a relationship with the kids are SOAR, and he said, ‘Would you consider taking on some of the SOAR kids?’

“What Pete didn’t know at the time is one of the SOAR kids is my brother and that I already had a relationship with them as well, and that I had been looking for an opportunity to bring the SOAR kids into my space. It was God-given, most definitely.”

Bogle said he called Medina to ask if she was interested in a downtown Mean Mug and the possibility of having SOAR students work there.

“It’s been a journey,” Medina said. “When I first opened up Mean Mug there, this program was in my heart. But I didn’t know about the SOAR program, and I wasn’t positioned properly. I was kind of getting my feet wet as far as what it meant to run the business, what it meant to have a business in the community. It’s been a four-year journey that comes to culmination in this grandiose opportunity and was sitting in the back burner and for Pete to give me.”

At the coffeeshop, the SOAR employees will learn how to run the register, pour coffee, make tea, run the espresso machine, make sandwiches and breakfast, wipe tables, restock and greet customers.

“I knew that being around these kids, not just my own, there’s a spirit that they have that makes people feel loved,” said John Fitzgerald, whose daughter Maggie is a SOAR student. “It just floats around like vibes. I think if that spirit is here it is going to draw people.”

Medina said she doesn’t want to be the only business owner to employ special-needs adults. She plans to invite merchants to the shop after a year to encourage them to hire them.

“I want to say kudos to you Evelyn because this is something that a lot of people have been a little fearful of,” Black said. “… You are going to set an example for so many other doors to open.”

Above Mean Mug will be Bogle’s architecture office. He said he will concentrate his efforts on opening the coffeeshop and then his office, set to open in mid-February.

SALISBURY — Fourteen veterans from across the central Piedmont gathered Dec. 1 to battle on the boards of one of... read more