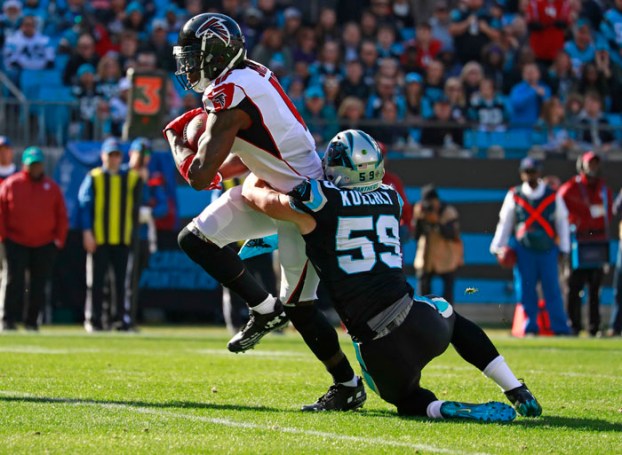 CHARLOTTE (AP) — It’s been a disappointing season for Matt Ryan and the Falcons, but the veteran quarterback is excited about what’s ahead for Atlanta next season — particularly on offense.
“It’s great to have a bunch of different guys that are capable of making plays at any time during a game,” Ryan said.
Ryan had 239 yards passing and threw touchdown passes to three different wide receivers, the Falcons ran for 194 yards without Devonta Freeman and Atlanta beat Carolina 24-10 on Sunday. It was the seventh straight loss for the Panthers (6-9), who were eliminated from playoff contention.
The Falcons (6-9), who’ve battled injuries at a number of key positions, have won two straight, giving them some hope for the future.
“We are at our best when everybody is involved and we can run the football and play-action pass off of it,” Ryan said. “We did a nice job of that today and everybody created explosive plays. It makes it difficult to defend when you have to account for a lot of different people.”
Ryan found Calvin Ridley for a go-ahead, 75-yard touchdown strike on the first play of the second half when Panthers safety Eric Reid bit on a play-action fake. He also connected with a wide-open Mohamed Sanu on a crossing route for a 44-yard score and threw a 1-yard TD pass to Julio Jones in the back of the end zone.
Ridley had three catches for 90 yards tied the franchise rookie record for TD catches in a season with eight. Sanu had five grabs for 81 yards, and Brian Hill had 115 yards rushing on eight carries.
The Falcons intercepted first-time starter Taylor Heinicke three times and forced four turnovers after allowing a touchdown on the game’s opening possession. Heinicke, making his first NFL start for the injured Cam Newton, left the game briefly in the second quarter with a left elbow injury, but returned and was repeatedly battered by the Falcons.
He finished 33 of 53 for 274 yards with one touchdown.
Panthers coach Ron Rivera said Heinicke gutted it out, but the team needs to find players who can make plays in the red zone.
“I wasn’t coming out of that game,” an emotional Heinicke said. “Those guys know I am going to fight for them.”
The Panthers’ frustration was evident when linebacker Thomas Davis and cornerback Captain Munnerlyn got into a heated exchange on the sideline.
“I really believed seven weeks ago we were a good football team,” Munnerlyn said. “Right now, we’ve just got a bad record. We just ran into some injuries, ran into some bad luck and fell short.”

McCAFFREY’S DAY
Carolina’s Christian McCaffrey had 21 carries for 101 yards and 12 receptions for 77 yards to set an NFL record for receptions in a season (106) by a running back.
He became the third running back in league history to record 100 receptions and 1,000 yards rushing in a season, joining LaDainian Tomlinson and Matt Forte. McCaffrey has 1,080 rushing yards and 845 receiving yards, giving him an outside chance to become only the third player to post 1,000 yards rushing and 1,000 yards receiving.
He also broke his father Ed’s record for receptions in a season, although McCaffrey quipped, “He’s got a comeback — he’s got three Super Bowl (rings). So he’s got me there.”

GOING VIRAL
Falcons punter Matt Bosher went viral when he delivered a blistering hit on Panthers returner Kenjon Barner.
“It was pretty cool,” Sanu said. “I jumped out of my seat. I was looking at the tablet and I saw it and was like, ‘Oh!’ I had to go congratulate him. It was a big hit.”

MORE FINES FOR REID?
Reid already been fined four times by the NFL this season for illegal hits and almost certainly will get a fifth letter in his locker next week. Reid was flagged for unnecessary roughness for a helmet-to-helmet hit on Ridley in the second quarter as Ridley tried to make a sliding catch.
Reid has been outspoken about the league drug-testing him six times in 11 weeks and fining him for four hits, one of which has already been overturned. He sued the NFL for collusion for keeping him out of the league because of his decision to kneel alongside Colin Kaepernick during the national anthem to protest racial and social injustice and said he’s not surprised by the treatment he’s received from the league.
Reid knelt again before Sunday’s game.

KEEPING UP WITH JONES
Jones continued to be a problem for the Panthers. He came into the game averaging more than 100 yards in 12 career games against Carolina and didn’t wait long to assert himself with four catches for 28 yards and 1-yard TD catch on Atlanta’s first possession.