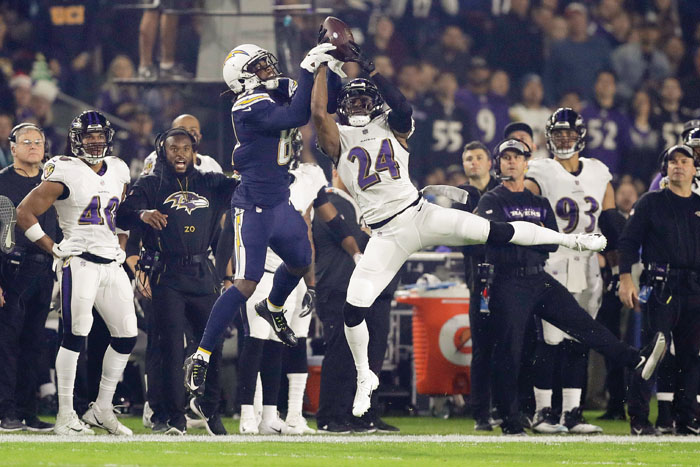 CARSON, Calif. (AP) — Lamar Jackson threw for 204 yards and had the longest touchdown pass of his brief career, and the Baltimore Ravens strengthened their chances of clinching a playoff spot with a 22-10 victory over the Los Angeles Chargers on Saturday night.

The Ravens (9-6) — who have won five of their last six with Jackson as the starter — dominated for most of the night to remain in possession of the last wild-card spot. They could take over the top spot in the AFC North though if Pittsburgh loses at New Orleans on Sunday.

“I’m used to playing on big stages and people doubting us. I try to prove them wrong,” said Jackson, who completed 12 of 22 passes and had his first 200-yard passing game. “We can play with anyone. That was a great team. We can fight and everyone sees it now.”

Baltimore got a win against a Los Angeles squad that had already clinched a playoff spot with wins in 10 of its last 11. The Chargers’ loss, which drops them to 11-4, deals a big blow to their hopes of winning the AFC West.

“They played their game. We couldn’t get them off the field on defense. And we couldn’t stay on the field on offense,” Chargers coach Anthony Lynn said. “I thought the special teams played pretty solid this evening, but offense and defense, we got outplayed. We got outcoached. It’s just that simple.”

Justin Tucker’s third field goal extended the lead to six and they put it away late in the fourth quarter when Patrick Onwuaso forced Antonio Gates’ fumble and Tavon Young returned it 62 yards.

Jackson, who was the 32nd overall pick in April, had his first 200-yard passing game, completing 12 of 22. He had come into the game averaging 146.2 yards in the previous five games. Gus Edwards had 92 yards on 14 carries, and Jackson had 39 yards on 13 carries.

The Ravens’ defense, which came into the game as the top-ranked unit in the NFL, frustrated the Chargers most of the night. Philip Rivers — who was 23 of 37 for 181 yards — was sacked four times, threw two interceptions and didn’t have a touchdown pass for the first time this season.

Melvin Gordon, who missed the past three games due to a knee injury, had 41 yards on 12 carries and a touchdown.

Baltimore led 6-3 at halftime but the Chargers took the lead less than two minutes into the third quarter on Gordon’s touchdown from a yard out. The Ravens got the ball to start the second half but Chargers rookie safety Derwin James forced Kenneth Dixon’s fumble, which was recovered by Melvin Ingram at the Ravens 21 and returned 3 yards.

The Ravens quickly answered on the ensuing possession when tight end Andrews split safeties Adrian Phillips and Jahleel Addae, taking Jackson’s pass 67 yards. They made it 16-10 on their next possession on a 56-yard field goal by Tucker — his league-leading 38th field goal of 50-plus yards.

“We turned it over so it was up to us to go back down and score,” Jackson said. “It was play action. Mark got open and made a great catch.”

The Chargers got the opening possession but promptly turned it over when Rivers’ pass was intercepted by Brandon Carr on a throw intended for Mike Williams on the first play. The Ravens converted the turnover into three points on Tucker’s 24-yard field goal. The big play of the drive was a 43-yard run by Edwards — the longest rushing play the Chargers have allowed this season.

Baltimore made two more trips to the red zone in the first half, but could only muster Tucker’s 35-yard field goal. On the Ravens’ third drive, they got as far as the 2, but Jackson was incomplete on a pass intended for Michael Crabtree in the end zone on fourth-and-goal from the 3.

Los Angeles got to 6-3 late in the second quarter on Michael Badgley’s 38-yard field goal.

Chargers: Travel to Denver on Dec. 30.

Thursday night football is here to stay, even if it’s gone for the rest of 2018.

In past years, some — make that many — would have said “good riddance.” That would be misguided this year.

First off, Fox’s presentation generally was strong and on target. Indeed, Troy Aikman, who has been Fox’s lead analyst for 17 years, might have had his best season.

Seemingly energized by having a true national game, in prime time with no competition, Aikman not only was spot-on with his analyses, he was more than willing to criticize play calling, performance and officiating.

Presenting your convictions and then sticking to them is a must for a top analyst, and Aikman came through for viewers the way he did as a three-time Super Bowl champion quarterback for Dallas.

“I think after 17 years of doing it somewhat the same way, this was an opportunity to kind of change up my schedule,” says Aikman, who at first had some reservations about balancing his family and business responsibilities.

“I think that is fair to say ‘energized.’ It felt more like an event, being the only game, and in prime time. On Sunday afternoon, especially for the late game, it sure seems like that’s when most people prefer to view football. But the prime time has a little bigger of a feel to it.

“We did not feel as restricted to the action on the field; we never feel completely restricted. It certainly freed me up and allowed me to have even more fun within the broadcast.”

Fox also wound up with some very solid matchups with intriguing storylines. Yes, NBC had the season opener, a Thursday nighter hosted by the champion Eagles in a rematch of a January playoff game with the Falcons. That wound up 18-12, eerily similar to Philadelphia’s previous win over Atlanta. It also, of course, didn’t have two teams coming off short weeks.

Then, Fox prospered with three of the better games of the entire season, games that wouldn’t have had the same cachet later in the schedule.

Cincinnati’s 34-23 victory over Baltimore — look at where those two teams reside now! — was entertaining, with Andy Dalton torching the Ravens with four touchdown passes. It also had the added spice of the Bengals having knocked the Ravens out of playoff contention in the 2017 finale.

A week later — and this was Aikman at his best, even if Jets fans swear play-by-play voice Joe Buck was outwardly rooting for the hosts — the Browns finally got a win, with Baker Mayfield stamping himself as an emerging force in just the third game of his rookie year.

“There were so much expectations with Baker Mayfield in that city. The team had not won a lot of games, and the fans were expecting the team would start to win games, so there was this optimism around the city,” Aikman recalls.

“Having been there for the preseason and then we go back in the regular season, you could just feel this energy building and it was a fan base that just wanted to celebrate. And then Baker comes off the bench to lead them to that victory. It was huge and fun to be a part of.”

Jets-Cleveland was followed by the Rams’ 38-31 shootout victory against the Vikings, when Jared Goff and Kirk Cousins combined for eight TD throws and 887 yards through the air.

For those enamored of the video-game fireworks, well, that was nirvana.

There was plenty of offense all year, even with only three full days between games. Oddly, the only Thursday nighter with teams coming off a previous Thursday contest, Saints at Cowboys the week after Thanksgiving, had the fewest points, 13-10 for the Cowboys.

That also was a mesmerizing drama in which Dallas’ defense stamped itself as capable of carrying a contender, shutting down Drew Brees and the ultra-prolific Saints. It also might have featured Aikman and Buck’s best work.

“I have become comfortable with where I am at within my job, so to speak,” Aikman says. “I always have been comfortable with my opinions and how I feel about the play on the field, and how it should be done and how teams should go about playing the game.

“There have been a lot of league issues and things happening as it relates to our game. I am not trying to grandstand or get on a soap box; that’s not my nature. I think I have to be honest in how I feel, and I feel strongly enough in my beliefs to feel I am speaking for the majority of the people viewing.”

There was a string of nine Thursday nighters, including New Orleans’ 31-17 victory over Atlanta on Thanksgiving night on NBC, in which it took at least 27 points to win. The Steelers went for 52 against Carolina, Denver scored 45 vs. Arizona, and Houston got 42 on Miami.

So complaints about not enough rest between games mostly would come from defensive players — the same folks who have protested, often with validity, about how the rules are stacked against them.

Two teams never made it to the Thursday night spotlight, Tampa Bay and Buffalo. Nobody missed them.

Three others had Thursday outings, but on Thanksgiving afternoon, when Chicago visited Detroit and Washington was at Dallas.

The Eagles, Cowboys, Saints and Falcons all had two Thursday appearances. Aikman and Buck had 14 such games, including Redskins-Cowboys in the late-afternoon Thanksgiving spot. They doubled up Thursday/Sunday assignments seven times.

The longtime partnership Aikman and Buck share made the extra duties much easier to handle.

“Joe is unbelievable, such a ridiculous talent,” Aikman says. “Joe is as gifted at his craft as anyone I played with. It’s a real marvel how smooth he is and what he sees.

“It’s like being married, when you’ve been around someone for so long you know their habits and patterns, and I know where Joe wants to go right from the start, how he wants to set the tone.”

Overall, ratings for the 13-game Thursday night package on Fox, with its simulcast on NFL Network, were up 2 percent over the 2017 season split between CBS and NBC. The average was 14,304,000 viewers, with Chargers-Chiefs in the last of the midweek games shattering the competition at 17.4 million on Fox/NFLN. That also was a 29-28 outcome in which LA scored a TD and 2-point conversion to win at the very end.

NFL games on Thursday nights are a money maker, so much so that the World Series in October hasn’t had a scheduled game that night since 2013. Of course, Fox now has the rights to both, and has no plans to create such a conflict.

Wait, how about the World Series leading into Thursday night football?