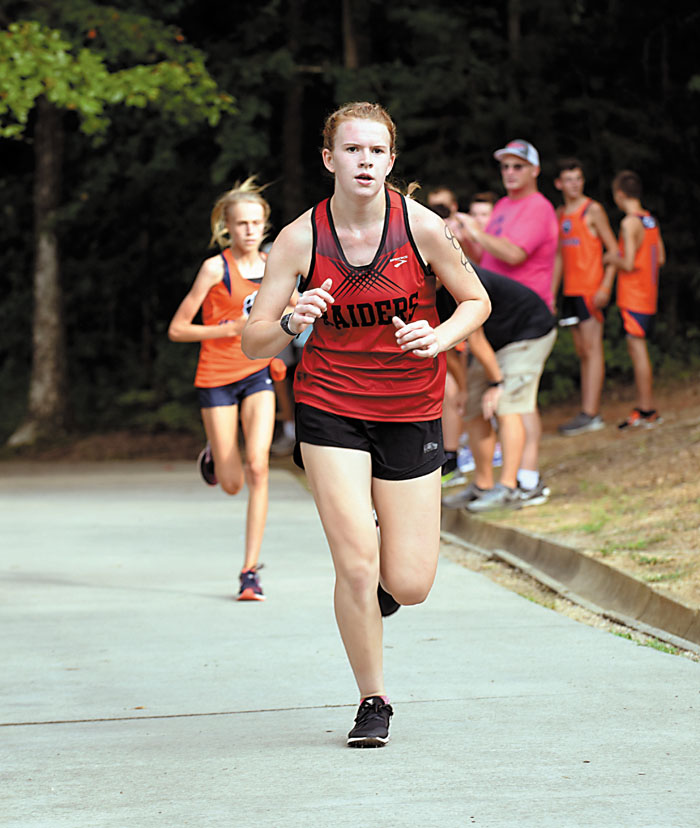 Lowery’s summer transfer to Gastonia Forestview, where she would finish 32nd in the 3A state meet in 19:58, seemed like an impossible loss to overcome, but the Raiders managed to do it in 2018.

South’s girls won the Rowan County Championships at Dan Nicholas Park for the first time since Carson opened in 2006 and split up the runners in the southern end of the county.

Two weeks after the Raiders owned the county with the minimum of five runners, they put seven girls on the course at Salisbury Community Park and added the Central Carolina Conference title to their list of accomplishments.

The pace-setter for Julian’s team, freshman Bethany Rymer, is the Post’s Rowan County Runner of the Year. She was runner-up for that honor in the CCC.

An athlete who has always been basketball-first, Rymer, quite literally, came out of nowhere to take the cross country world by storm.

“My dad really wanted me to run, and so I decided to give it a try,” Rymer said. “I’m just glad I did. It’s a sport I’m starting to love.”

“I started running at 8 with Ed Dupree coaching me on the Faith Flyers,” Frick said. “Then I had Rick Roseman as my coach in high school. You can’t have better coaches than that, and they instilled a passion for running in me that I still have today in my 40s. Running still helps me in my daily life. I’m thrilled that I have a chance to share what I’ve learned with South’s cross country team.”

She believes that Rymer, who has been involved seriously in cross country for less than a year, has a chance to be something special.

“She’s a very good athlete, and what she did as a freshman was lay a great foundation,” Julian said. “No one can be great every single race, so a key for her success is going to be patience. Running is a journey, and I just want her to enjoy the ride. We want to set goals for her as she goes along. She has the potential to accomplish so many goals.”

“The county was the highlight of the season for me,” Rymer said. “Everyone on the team ran great and set personal records.”

In the CCC Championships, Rymer’s runner-up finish, Henry’s fourth place and McGuire’s 12th sparked the Raiders to an 11-point win over runner-up East Davidson. Rheta was 16th, while Nichols was 26th.

“Those wins in the county and the conference, they were great for the school,” Julian said. “We don’t have big numbers, but we believed in the girls and they believed in themselves.”

Rymer placed seventh in the 2A Midwest Regional at Kernersville’s Ivey Redmon Park in 20:35.

That put her in the 2A State Championships a week later, also in Kernersville, and she ran an almost identical 20:36 for 24th place.

“Being in the state championships, competing against all those great runners, that was a little bit nerve-wracking,” Rymer said. “But it was a great experience.”

As Rymer gains experience, her future should be unlimited. She had an amazing debut for a cross country rookie.

“I’m starting to see that gleam in her eye, that passion for the sport that the really runners get,” Julian said.

Carson freshman Abby Lee was sensational early and won the pre-county race but was unable to compete most of the season because of a medical condition. She was named to the all-county team by a vote of the coaches.

Even without Lee, Carson was able to prevail in the North Piedmont Conference Championships held at Dan Nicholas Park on Oct. 16. Junior Taylor Conrad, who was fifth despite dehydrating in the county meet, was the top Rowan individual in the NPC with a fourth-place finish and led coach Les-Lee Ihme’s team to victory. She had help from Barrera, Green, Isley and Megan Deal. Carson’s score of 47 topped runner-up South Iredell (57).

Henry, a junior who could become the all-time scoring leader for Rowan County soccer this spring, enjoyed a notable season for South. For her, cross country is a great way to keep in shape for soccer.

Harrison, a junior basketball standout who placed fourth in the county and fifth in the NPC, had quite a cross country comeback season for East.

Salisbury junior  Cressler was third in the county and fifth in the CCC, while Salisbury senior Simons placed sixth and 10th in those races.

West sophomore Spicer took sixth in the NPC meet to go along with her 11th-place finish in the county.