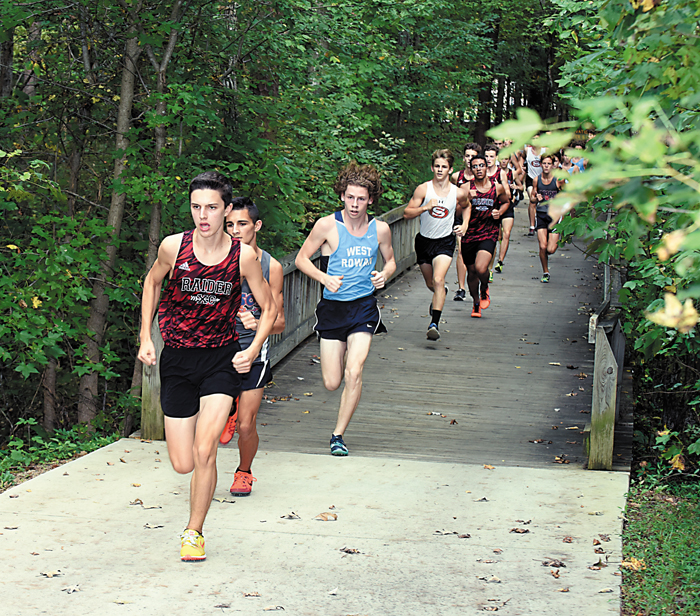 SALISBURY — Only lightning can stop a cross country meet.

On Oct. 10, South Rowan’s Noah Julian ran one of the strongest races of his young life, ran it in relentless rain at Southside Park in Newton. Clocked in 16:50.87, he won the United Way Invitational meet by 16 seconds in a field of 150. That event that was the defining moment of his remarkable sophomore season.

“It was pouring water that day,” said Julian, wincing at the memory. “It was a pretty good win. I was proud of that one.”

“In the Rowan County Championships, I ran 16:59 to break 17 for the first time,” Julian said. “That was a big goal, so that was another memorable race for me.”

Noah is coached at South by his father, Scott, who is the Rowan County Coach of the Year for boys cross country. The Julians also were honored as the top runner and top coach by the Central Carolina Conference.

Fathers (or mothers) coaching their children at the high school level is always an intriguing dynamic because it’s so difficult to treat them as just another member of the team. It can be the best of times or the worst of times — or it can be a mixed bag of both.

For the Julians, it’s definitely the best of times.

That’s mostly because Scott is ego-less. He was a fine high school runner — placing third in the county meet and fourth in the regional at McAlpine in 17:01 in the fall of 1991 when he competing as a senior at East Rowan for coach Rick Roseman. He’s been a very good runner for decades, but he’s always quick to let you know that his father (Mike), his wife (cross country and track state champion Rebekah Frick Julian) and his children are all more gifted than he is.

For his part, Noah is not a tough person to coach. Determined, but respectful. Competitive, but polite. A guy who led by example and through encouragement. There’s not an obnoxious bone in his body.

But when he started running in the fourth grade for the Hurley YMCA Warriors, traveling to meets all over the country, he discovered he had the same passion for running that ran in the family.

“He did well in meets and we could see he had the work ethic that’s needed,” Scott said. “He had an aptitude for running.”

Noah made a nice splash as a freshman in the fall of 2017— second to Incardona in the Rowan Championships — and he made more strides this season. He wants to be great, so there’s no reason to think he won’t keep making them.

Scott and Noah are proud of what South accomplished in the fall as a squad. County team champs for the first time since 2007 and close to winning a championship in the 10-team CCC. The CCC Championships were a four-team dogfight between Oak Grove (66 points), Central Davidson (66), South (68) and Ledford (70).

“We didn’t have the numbers of some of the other programs, but we did have talent,” Scott said. “I tried to grab hold of this program and to get to know all the kids. We tried hard to build something together and we  got good leadership from Noah and from (senior) Ari Moya. These kids weren’t hard to work with. They made it easy for me.”

“The team success was big, really exciting,” Noah said. “We worked hard to have those good runs. Everything we did all season we did the correct way and things worked out for us. We peaked at the right time.”

Noah ran 17:25 in regional competition to qualify for his second straight state meet. In 2A state competition on Nov.  3, he ran 17:09 at Ivey Redmon Park in Kernersville. He was one of the faster sophomores and finished 19th overall. It was a PR — by five seconds — for him on the Redmon course and capped his special season.

“I realize cross country isn’t the most recognized sport, but it does feel good to be considered the best in the county and the conference,” Noah said. “It’s a nice reward for all the running, for all the miles, for all the work.”

Waldo finished three seconds ahead of Barbee at Dan Nicholas Park and led the Falcons to the title in the six-team NPC.

Joining Julian, Barbee and Waldo on the all-county team are South’s Waugh, Miller and Moya, who made eye-popping progress during the course of his career;  Carson’s John Sokolowski, TJ Jones and Jimmy Sentilles; West’s Devon Pena and Issac Castro, and Salisbury’s Michael Lowry.

South placed seventh in the 2A Midwest Regional last season. The top four squads in each regional qualify for the state as a team. That’s a dream that may not be impossible for the future Raiders.

“We’ve just got to keep the kids on the tracks and on the roads and we’ve got to keep finding new and interesting ways to do that,” Coach Julian said. “Fortunately, we’ve got the kind of kids who are eager to get  better.”