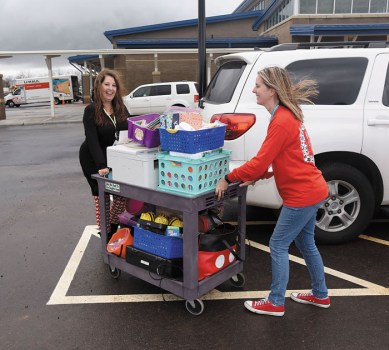 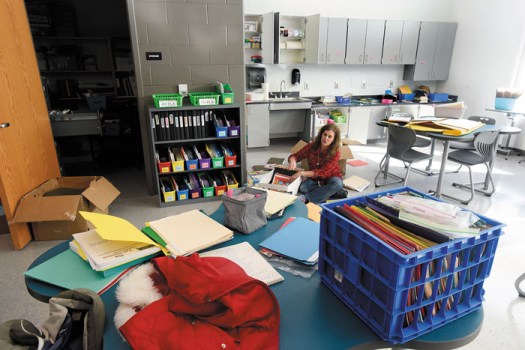 Sonya Perry, a fourth- and fifth-grade AIG teacher, sorts her materials as she straightens her new classroom. Wayne Hinshaw/for the Salisbury Post 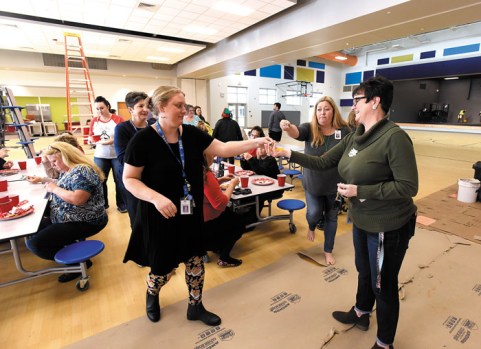 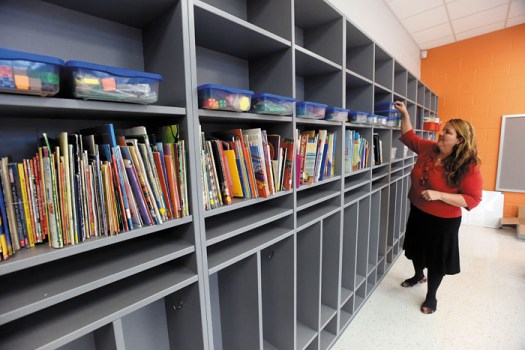 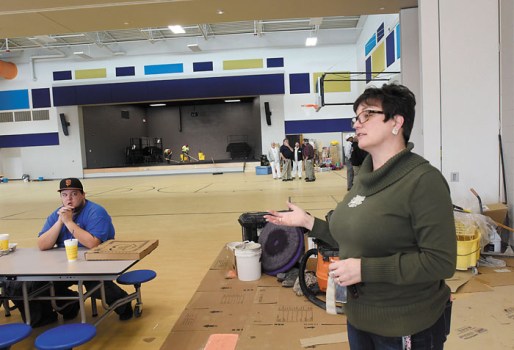 A small staff lunch in the cafeteria was subdued. Teachers having just made the trip from Woodleaf and Cleveland elementary schools after saying goodbye were the last stragglers to enjoy winter break.

“Today couldn’t have gone smoother,” Wolfe said. “It’s because of you. You made it look so easy.”

Wolfe held out her hand and, one by one, teachers filed by, dropping keys into her palm. The keys were shiny and silver, newly minted, or old, with scuffed brass. Some teachers handed them over with tears in their eyes, while others grinned and said, “Merry Christmas.”

For many, handing over the keys drove home more than anything that Cleveland and Woodleaf elementary schools are no longer. Now, they’ve been consolidated as West Rowan Elementary School.

She still had tears in her eyes at lunch. Currie had been a teacher at Woodleaf Elementary for 23 years. It was her first job, and two of her children went to school there. But the idea of closing the school was always on the horizon.

But the issue kept getting put off — again and again, year after year.

“We drug it out and drug it out,” Currie said. “I’m just tired of the process.”

As of Friday, the plan is finally complete. Cleveland and Woodleaf are closed, merged into a single new school. Teachers spent Friday afternoon moving into their new classrooms, and students will begin classes there in January.

It’s a big change — for teachers and for the community.

“That’s the crazy part,” Currie said. “You’ve got people who are saying, ‘My grandparents and great-grandparents went here.’”

“It’s emotional for them, too,” added teacher Heidi Judd.

Friday was a day of mixed feelings, nostalgia and sorrow, but also of hope and happiness.

The new school has a state-of-the-art media center, a technology lab, two STEM labs and an art room with a working kiln. The ceilings are high, and the large windows let in lots of light. Teachers, however, said they are most excited about a smaller design feature: Each classroom has its own storage closet.

Cubbies and shelving are all the same size and color, she said — no more mismatched bookcases.

“Now everything matches and looks neat and clean,” she said.

But there are some things she’s going to miss about her old school.

Compared to Cleveland and Woodleaf’s compact, century-old designs, West Elementary is sprawling. It has got four classroom halls, a large cafeteria and a spacious multipurpose room.

School staff members welcome the change, many joking that they wouldn’t have to turn sideways to fit through doors.

But there’s still a lot of work ahead. Teachers were given a few hours on some school days to begin shifting supplies to their new classrooms, but the bulk of the work was done Friday afternoon. Teachers also will have a couple of days at the end of winter break.

“It’s an exhausting but worthwhile effort,” Curry said. “Having to move and pack up and teach all at the same time.”

Wolfe said she tried to give the staff as much time as possible to move before break so that teachers could enjoy the holidays in peace.

But while the stress of moving is still underway, both schools are together at last.

“Everything’s under one roof,” Wolfe said. “It’s going to be amazing.”