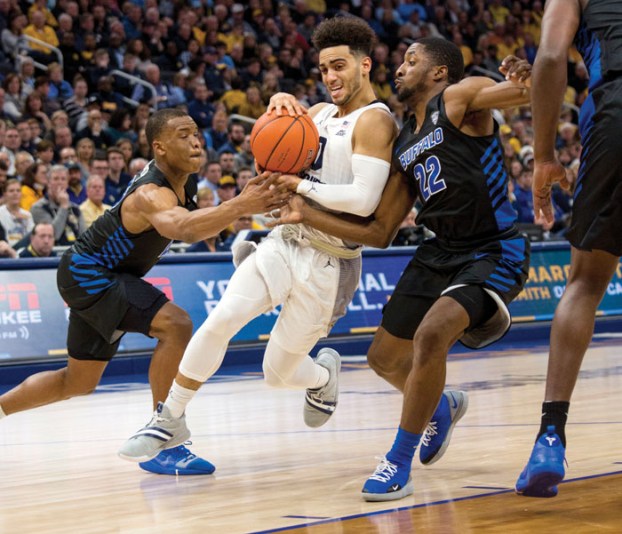 Howard scores 40 in second half, lifts No. 20 Marquette past No. 14 Buffalo

By JIM HOEHN, Associated Press
MILWAUKEE (AP) — Markus Howard scored 40 of his 45 points in the second half as No. 20 Marquette pulled away to hand No. 14 Buffalo its first loss of the season, 103-85 on Friday night.
Sam Hauser added 18 points for the Golden Eagles (10-2), who hit seven 3-pointers during a second-half surge that turned a 52-49 deficit into an 85-68 lead.
Howard, just 1 of 7 with one 3-pointer in the first half, finished 12 of 25 from the field. He was 9 of 13 from beyond the arc and 12 of 12 of from the line as Marquette improved to 9-0 at home.
Jeremy Harris had 22 points, Dontay Caruthers scored 20 and CJ Massinburg added 18 for the Bulls (11-1), whose season-opening run was their best since 1930-31.
Marquette, which trailed by as many as nine in the first half, used a 16-3 run to open a 65-55 lead with 12:16 remaining. Hauser and Howard capped the run with back-to-back 3-pointers.
The Bulls pulled within 67-65 on a free throw by Nick Perkins, but the Golden Eagles ran the lead to 79-65 when Howard was fouled on a 3-pointer and added the free throw.
The Bulls, coming off their first victory over Syracuse in 55 years, were hot early, opening a 19-10 lead on the strength of four 3-pointers.
Jayvon Graves’ dunk put Buffalo up 27-23, but Joey Hauser, a 6-foot-9 freshman forward and Sam Hauser’s younger brother, hit three consecutive 3-pointers — all of his first-half points — to give the Golden Eagles their first lead at 32-27.
Howard hit a pair of free throws with four seconds left to put Marquette up 39-38 at the break.
Buffalo hit 6 of its first 11 shots but went just 7 of 23 for the remainder of the half.
Marquette out-rebounded the Bulls 27-16 in the first half, including 16 offensive rebounds, en route to a 13-0 advantage in second-chance points.
BIG PICTURE
Buffalo: The Bulls close out their nonconference schedule at Canisius, and then open Mid-American Conference play on Jan. 4 at Eastern Michigan.
Marquette: The Golden Eagles have one more nonconference game before opening Big East play at St. John’s on Jan. 1.
UP NEXT
Buffalo is at Canisius on Dec. 29, the third of four consecutive road games.
Marquette hosts Southern on Dec. 28.
___
More AP college basketball: https://apnews.com/Collegebasketball and https://twitter.com/AP_Top25

By JOE KAY, AP Sports Writer CINCINNATI (AP) — The Los Angeles Dodgers had a surplus of outfielders. With one attention-getting... read more