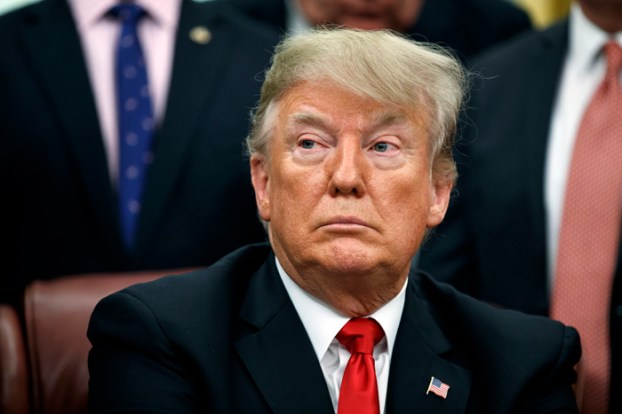 President Donald Trump listens during a signing ceremony for legislation in the Oval Office of the White House. Evan Vucci/Associated Press file photo

Cokie and Steven Roberts: The charlatan-in-chief

“The man doesn’t tell the truth.”

That simple, devastating statement describing Donald Trump was not made by a political foe. It was made by Michael Cohen, Trump’s close confidant and consigliere, a man who knows the president very, very well.

In an interview with ABC’s George Stephanopoulos, Cohen said of the president, “It is sad that I should take responsibility for his dirty deeds.” According to court documents, those fetid feats included making illegal hush money payments to two of Trump’s former girlfriends. When Stephanopoulos asked if the president is “still lying” about those affairs, Cohen answered emphatically: “Yes.”

Trump has held office for almost two years, and this fact is now completely clear: The president lies constantly and consciously. His falsehoods are not errors or mistakes but an essential part of his political strategy. He is the charlatan-in-chief.

And that raises a critical question: How does the press cover a man who deceives deliberately, who never retracts his misstatements, who never apologies for untruths, and who rejects all attempts to correct the public record?

The first step is to identify the problem. Glenn Kessler, the excellent fact-checker at The Washington Post, who awards four Pinocchios for the most egregious falsehoods, wrote recently: “Trump’s willingness to constantly repeat false claims has posed a unique challenge to fact-checkers. Most politicians quickly drop a Four-Pinocchio claim, either out of duty to be accurate or concern that spreading false information could be politically damaging.
“Not Trump,” adds Kessler. “The president keeps going long after the facts are clear, in what appears to be a deliberate effort to replace the truth with his own, far more favorable version of it. He is not merely making gaffes or misstating things, he is purposely injecting false information into the national conversation.”

Since ordinary fact-checking has no impact on Trump, Kessler has introduced a new category, the “Bottomless Pinocchio,” which will “be awarded to politicians who repeat a false claim so many times that they are, in effect, engaging in campaigns of disinformation.”

Kessler identifies 14 Trump falsehoods that qualify for this “dubious distinction.” Just one example: The president has claimed 123 times that he passed “the biggest tax cuts in history.” Yet it’s only the eighth-largest reduction “in the past century,” documents Kessler.

No other politician qualifies for even a single Bottomless Pinocchio, and that poses a huge problem for Kessler and every other reporter covering Trump. If you are even-handed in calling out liars, but one figure fabricates far more than everybody else, you can seem to be biased against that person, even when you are being scrupulously impartial.

This is often called the “false equivalency” problem, and journalists are struggling to understand how Trump has changed the rules of engagement and required new approaches. Elisabeth Bumiller, the Washington bureau chief of The New York Times, told Steve in an interview: “We are much tougher about calling out falsehoods from the president. In the old days, we would say, ‘The president said this, but Democrats said this.’ We don’t do that anymore.

“If the president is saying something over and over again, when he is going against the statistics of his own government, you’ve got to point that out right away. You can’t just say, ‘He said.’ You have to say, ‘He falsely said,'” maintains Bumiller. “Trump has uttered so many falsehoods, so often, that to just report what he said, like we have covered other presidents, seems like a falsehood in itself.”

Robust fact-checking is only part of the proper response to Trump. Good, old-fashioned reporting is still a staple of holding any politician accountable, and this week, New York’s attorney general forced the president’s family foundation to shut down after uncovering a “shocking pattern of illegality” in its operations. The investigation was triggered by a series of reports in the Post about Trump’s charitable chicanery that won the Pulitzer Prize last year.

In addition, New York’s tax department is “vigorously pursuing” an investigation into possibly fraudulent practices followed over many years by Trump’s family business. They were first outlined by The New York Times.

The media is completely justified in being “much tougher” on Trump than previous presidents because he is much tougher on the truth than they were. But it is extremely important that journalists resist the calls on the left to abandon their professional ethics and become part of the “resistance” to Trump. The media should be tough but fair — completely, unimpeachably, ferociously fair.

Otherwise, we lose our credibility. And our soul.

Quotes of the Week: ‘We are a family’