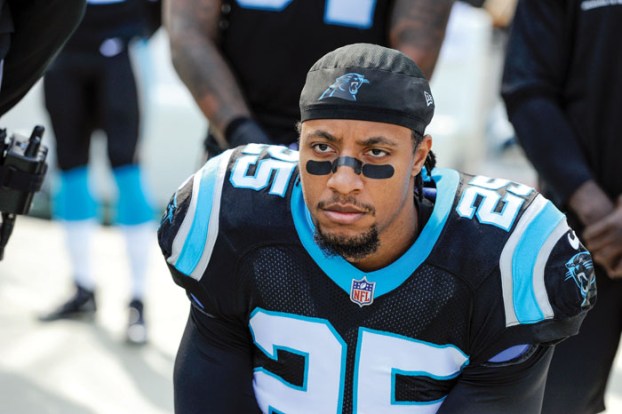 FILE - In this Nov. 25, 2018, file photo, Carolina Panthers strong safety Eric Reid (25) knells along the sideline during the national aAnthem before the start of an NFL football game against the Seattle Seahawks in Charlotte, N.C. Reid says he is “not surprised” he has been drug tested by the NFL six times in the past 11 weeks, his Panthers teammates and coaches are growing increasingly annoyed at the frequency of the league’s “random” policy. (AP Photo/Mike McCarn, File)

CHARLOTTE (AP) — While Eric Reid is “not surprised” he’s been drug tested by the NFL six times in the past 11 weeks, his Panthers teammates and coaches are growing increasingly annoyed at the frequency of the league’s “random” drug testing policy.

Coach Ron Rivera quipped Thursday at his news conference that “if my name came up that many times I would buy a lottery ticket.”

“I don’t think there’s any secret about it that something is wrong with that,” said Smith, who noted that he has been tested “two or three times” this season in 15 weeks.

Several veteran players say that is about the average for an entire season; Reid said that was his average before returning to the NFL.

Reid said he has taken seven drug tests in all (one was mandatory) since signing with Carolina on Sept. 27, fined three times for illegal hits totaling nearly $50,000 and ejected once.

The sixth-year safety believes it all stems from his pending collusion case against the NFL that alleges owners conspired to keep him out of the league for kneeling alongside former San Francisco 49ers teammate Colin Kaepernick during the national anthem to protest social and racial injustice.

Reid said his teammates were more shocked than he was when he was selected to be tested again after Monday night’s loss to the Saints.

The 27-year-old said he is not concerned about failing a drug test because he’s never failed one before, but he wants “it to be dually noted that it has happened. … It’s like stop-and-frisk. If am walking down the street it doesn’t mean I am doing anything illegal, but that doesn’t mean I should be stopped every time.”

Reid said he’s not buying that the league doesn’t have any control over the random tests.

“I perceive that the league is full of you-fill-in-the-blank,” Reid said. “I wish I could see y’all’s faces when, or if, what I know becomes public from this (collusion) lawsuit.”