Quotes of the Week: ‘We are a family’ 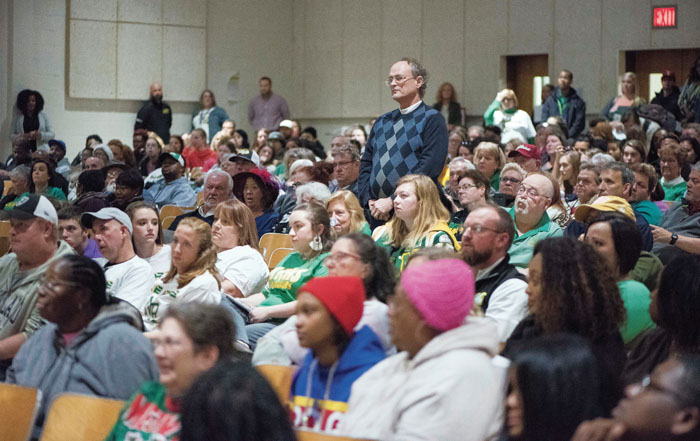 Randy Getty questions why the audience is being broken up into smaller groups at a community input session on the Rowan-Salisbury Schools plan to close and consolidate schools Wednesday at North Rowan High Schoo. Jon C. Lakey/Salisbury Post

“We don’t want to leave. We are a family. We are a community. We want to do this together.”

— Randy Gettys, who was among a crowd that turned out Wednesday for a community input meeting on a school consolidation plan that calls for the eventual closing of West Rowan High School, specifically questioning the format that called for small-group discussions

“It was fun. … I felt comfortable with the two people, even though I couldn’t tell you who was behind me.”

— Mary Kidd, 97, who with the Rev. Maurice Staley, 91, became an internet sensation after Trinity Oaks assisted living center posted a video on Facebook showing them sledding down a hill during last weekend’s winter storm accompanied by staff members

“I don’t do it for the recognition. I just want to teach.”

— Zach Overcash, a math teacher at Carson High School recognized as Rowan-Salisbury Schools Teacher of the Year, on his calling to be an educator

“You get more out of it than you put into it.”

“We didn’t have much, but we did have love.”

— Becky Yost, 78, who with her five living siblings donated to the Christmas Happiness Fund in memory of their parents, as they have each year for the past decade

“We need to play better, but it’s still nice to put another win in the books.”

“They always say in the Army never to volunteer for anything … but this time I’m glad I did it.”

— Dale Aldred, an Army veteran who joined other volunteers for the Wreaths Across America observance to place Christmas wreaths at the graves of veterans in the Historic Salisbury National Cemetery