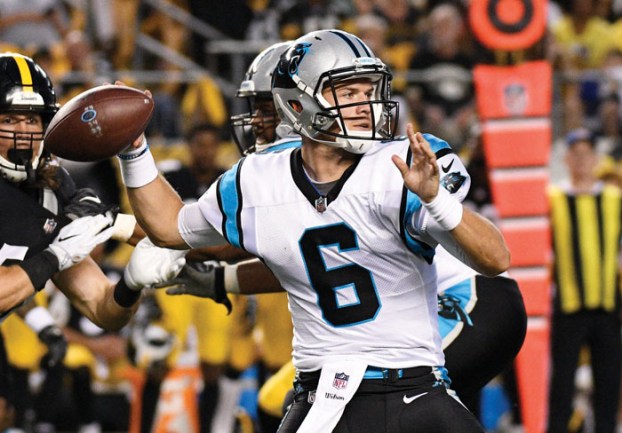 FILE - In this Aug. 30, 2018, file photo, Carolina Panthers quarterback Taylor Heinicke (6) throws a pass during the first half of a preseason NFL football game against the Pittsburgh Steelers in Pittsburgh. Heinicke will be making his first career start against the Falcons with Cam Newton out with a shoulder injury. (AP Photo/Don Wright, File)

Panthers’ QB Heinicke out to prove he’s no joke vs. Falcons

CHARLOTTE (AP) — It wasn’t long after Taylor Heinicke was named the Panthers’ starting quarterback for Sunday’s game against the Falcons that the jokes began rolling in.

Panthers center Ryan Kalil laughed that he might have to bring down his shotgun snaps so they don’t go flying over the 6-foot QB’s head. Running back Christian McCaffrey teased that he’s glad he won’t look so small in the backfield anymore now that Heinicke has taken over for the 6-foot-5, 245-pound Cam Newton.

Heinicke laughs at the remarks, pointing out that he’s the same size as Russell Wilson and Drew Brees.

“I want to emulate those guys,” Heinicke said.

Heinicke makes his first career start over Newton, who was shut down by the team earlier this week because of a lingering right shoulder problem that made it nearly impossible for him to throw the ball more than 15 yards down the field.

The Panthers have completed only nine passes of longer than 20 yards this season and three times have subbed in Heinicke to throw Hail Mary passes because Newton lacked the arm strength to handle the task.

But that doesn’t mean the Panthers will be changing much up on offense this week against the Falcons.

“I don’t know if in one or two games you see that being a whole lot different,” Panthers offensive coordinator Norv Turner said. “If the opportunities are there, he is capable of getting the ball down the field.”

While Heinicke has been in the league since 2015, he has only attempted five passes.

Still, the Panthers like his potential, which is why they let veteran Derek Anderson walk in free agency last offseason.

Heinicke has been in Turner’s system three years, including two with the Vikings as a backup in 2016 and 2017. When he was signed this offseason, he spent a lot of time teaching other players the playbook.

He has also taken the bulk of the reps in practice this past month with Newton mostly resting the shoulder between games.

“I think guys are excited to see what he is capable of doing for us,” Panthers coach Ron Rivera said. “I think he wants to prove a lot of the people who believed in him right.”

The game itself doesn’t have much meaning with the Falcons (5-9) already eliminated from playoff contention and the Panthers (6-8) hanging on by a thread as the result of an ongoing six-game losing streak.

Here are other things to know about the Falcons-Panthers matchup:

There haven’t been many bright spots on a Falcons offense decimated by injuries to both starting guards and running back Devonta Freeman, but quarterback Matt Ryan sees hope in the wide receivers working behind veterans Julio Jones and Mohamed Sanu.

Rookie Calvin Ridley leads the team with eight touchdown catches and is second with 56 receptions. Ryan also noted progress made by Russell Gage, who had two catches last week, and Marvin Hall.

“The young guys’ improvement and development have been a bonus for us,” Ryan said.

Ryan is the 12th quarterback to win 100 games with one team since the AFL-NFL merger.

He won his 100th with the Falcons last week, leaving him tied with Joe Montana for the 11th-most wins with one team during that span.

It’s bad enough the Falcons are 5-9 after back-to-back playoff appearances, including a spot in the Super Bowl after the 2016 season. It’s worse they have to watch other teams play in their home stadium — and practice at their facility — for the Super Bowl. Coach Dan Quinn had a grim response when told the NFC Super Bowl team — possibly the rival Saints — will practice at the Falcons’ facility in Flowery Branch.

“I guess I’m most disappointed we won’t be the ones playing and practicing at our site,” he said before walking out, ending the Thursday news conference.

With the Panthers have collapsing the way they have and the roster starting to grow old, this could be the last home game for a few popular veteran players who have spent most or all of their careers in Carolina.

Center Ryan Kalil has already said he is retiring after the season, while linebacker Thomas Davis and defensive end Julius Peppers are working on expiring contracts. Tight end Greg Olsen’s future is also up in the air after missing large portions of the last two seasons with a broken foot, and cornerback Captain Munnerlyn and is a potential salary cap casualty.

Rivera said he’d like all of his veterans back, but those aren’t his decisions to make.

The Panthers placed outside linebacker Shaq Thompson and kicker Graham Gano on injured reserve this week with their playoff hopes all but over.

Jermaine Carter will get a shot to play in Thompson’s spot, and Chandler Catanzaro will continue to handle kicking duties for the Panthers as he’s done the previous two weeks.