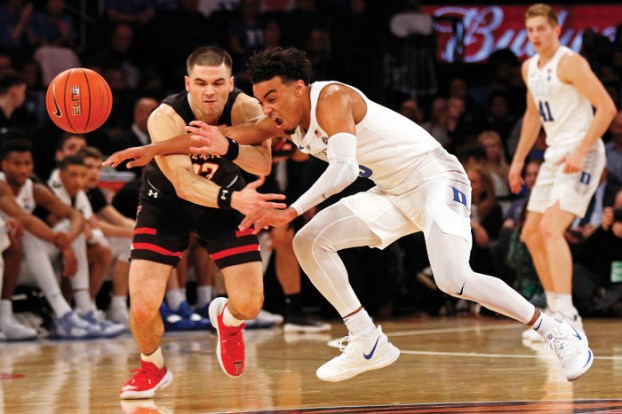 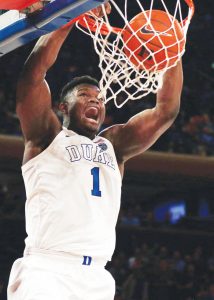 NEW YORK (AP) — Zion Williamson was the must-see player to watch on an NBA stage. The Duke star was heckled when he missed a dunk in warmups and had Blue Devils diehards — and casual hoops fans and NBA stars — roaring each time he touched the ball.

He felt at home as a guest inside the New York Knicks locker room.

Williamson might look pretty good next season in a blue-and-orange uniform, too.

Williamson had 17 points, 13 rebounds and wowed a crowd of nearly 20,000 before he fouled out, and the second-ranked Blue Devils ended No. 12 Texas Tech’s unbeaten start with a 69-58 victory Thursday night at Madison Square Garden.

“It is the Garden,” Williamson said. “It’s where big-time players are made.”

The biggest was the 6-foot-7, 285-pound Williamson that has been pegged as a can’t-miss prospect in the NBA. Philadelphia 76ers star Jimmy Butler sat courtside and cheered for Williamson and Knicks President Steve Mills was in the house. With the nine-win Knicks slogging through another miserable season, the idea of what Williamson could do in New York surely tantalized Mills’ mind.

White provided late help once Williamson was whistled for his fifth foul on a drive to the basket. White hit a 3 in a back-and-forth game for a 56-55 lead that secured the Blue Devils’ 35th career win at MSG.

RJ Barrett scored 16 points for the Blue Devils (11-1) and Tre Jones had 13 points in the first meeting between the programs. Both reached the Elite Eight last season and the atmosphere had a late-March feel.

“This is a great night for college basketball,” Duke coach Mike Krzyzewski said.

Jarrett Culver scored 25 points for the Red Raiders (10-1) in their first loss since the NCAA Tournament.

With the Garden rocking from the tip, Culver hit a 3 for a 45-40 lead and Williamson came back down and missed Duke’s 13th straight 3-pointer. White finally connected on Duke’s 15th attempt that tied the game at 45-all and brought “Let’s go Duke!” chants to a crescendo. The cheers were quickly muted by Williamson’s fourth foul (at 10:32) that forced Krzyzewski to sit the likely one-and-done freshman.

Williamson checked in with 6:31 left and the game tied at 53 and White hit a go-ahead 3 a possession later. He couldn’t stay out of foul trouble and picked up his fifth on a drive to the basket with 3:51 left and Duke up 60-55.

But the Blue Devils hung on without their star the stars came to watch.

“It’s crazy. I can’t describe it,” Williamson said. “The fans from both teams were great. It was just a great basketball game.”

The Garden was lit once doors opened and ushers had to shoo away fans who lined the court during warmups to snap a picture of Williamson. Williamson missed a dunk in the layup line that earned him some heckles from the Red Raiders fans behind the basket.

Texas Tech fans were drowned out by a roaring crowd at packed MSG for Williamson’s lineup introduction. He scored the first basket of the game and capped an 8-0 run with a rim-rattling dunk off an alley-oop that made the Garden sound more like Cameron.

“I thought we were composed all night. We call it stone faced,” coach Chris Beard said.

Texas Tech: The Red Raiders could have at least built a double-digit cushion in the first half had it not been for 15 turnovers.

Duke: Duke had averaged 75.7 possessions per game this season, ranking the Blue Devils 28th nationally. Duke missed 17 of 20 3s and made only 23 of 60 shots from the floor. “We’ve been scoring at a high rate but we haven’t played against a defense like theirs,” Krzyzewski said.

White’s mother and sister traveled from Australia to watch him play.

Texas Tech: The Red Raiders get one more nonconference warmup against University of Texas Rio Grande Valley on Dec. 28.