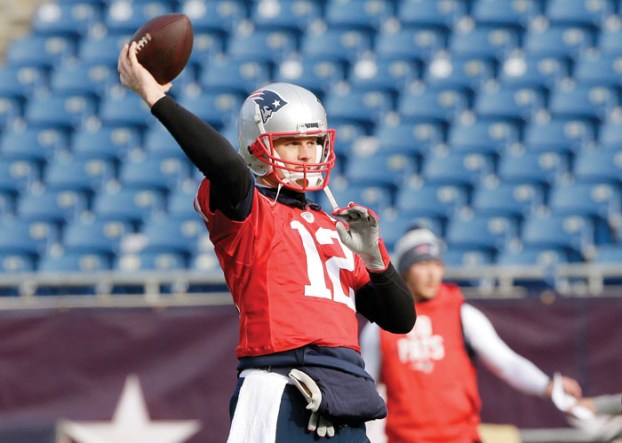 Brady on Pats losing Gordon: ‘There wasn’t much reaction’

FOXBOROUGH, Mass. (AP) — Tom Brady has a 29-3 record against the Buffalo Bills, the most victories by a quarterback against one opponent. A 30th will give the Patriots their 10th straight AFC East crown.
But he won’t have suspended receiver Josh Gordon, who was starting to carve out a vital role in the England’s offense.
“There wasn’t much reaction,” a subdued Brady said Friday, answering the first question at his weekly media gathering. “We all wish him the best. I think that’s kind of how we all feel. We want him to do what’s right for him.”
Several teammates commented on the loss of Gordon, who left the team Thursday to “step away” and is again suspended by the NFL for violating terms of his reinstatement under the substance abuse policy. Brady has commented almost weekly about all the positive work being put in by Gordon. He was asked Friday if he saw any indication trouble might be coming, if there was shock when he heard about it.
“That’s exactly how I felt, so . I certainly appreciate all his efforts and hard work and, you know . I didn’t have much of a reaction,” Brady said. “Just focus on what I need to do. That’s kind of the way it’s been all year.”
So there was no indication of any trouble?
“I mean, I have no idea,” Brady said. “I showed up, I heard, just like everyone else.”
Brady, whose locker was next to Gordon and was viewed as sort of a mentor for the troubled receiver, wouldn’t say if he reached out to him
“Those are all very personal things,” he said, “so I’ll keep those to myself.”
Brady and the Patriots host the Bills this week and the Jets in the regular-season finale – and have to do it without Gordon.
“I have a lot of confidence in the guys that have been in there,” said Brady, who noted the team could have lost Gordon or anyone else on the first play of Sunday’s game and had to adjust from there. “Jules (Edelman), Philip (Dorsett), Hoge (Chris Hogan), CP (Cordarrelle Patterson) – they all do a good job. They all have different roles.”
Gordon had 40 receptions for 720 yards and three touchdowns with the Patriots — five years removed from an All-Pro season in 2013 with 87 catches for 1,646 yards and nine touchdowns.
“There’s a lot of those different types of feelings and emotions over the course of the year,” Brady said. “We all have lives that exist outside of this building. There’s a lot of support from everyone and everyone goes through different things throughout the year. We’ve certainly faced our fair share of adversities. I think part of that is mental toughness and when you actually go out on the field and in meetings and so forth, you just focus on what you have to do and what your role is, what your job is.
“I think we’ve done a good job of that. We’re just working through the week and realizing obviously it’s a huge game, a big opportunity for us and it’s one that we’ve got to win, so we’ve been talking about that all week.”
Earlier Friday, coach Bill Belichick addressed Gordon’s situation, saying he spoke with the wide receiver Thursday morning.
“It’s obviously an unfortunate situation, and personally, I wish him the very best, as we all do on this team,” Belichick said. “He’s made a statement, the organization’s made a statement, the league’s made a statement. I’ve spoken on him at length over the last three months, and so I don’t really have anything at this point to add to that. It’s a private matter, and I hope that he’s able to deal with it successfully.
“So, otherwise, we’re moved on to Buffalo and big challenge ahead of us on Sunday. Today will be a big day for us, and we need to make the most of it and be ready to go.”
___
More AP NFL: https://apnews.com/NFL and https://twitter.com/AP_NFL