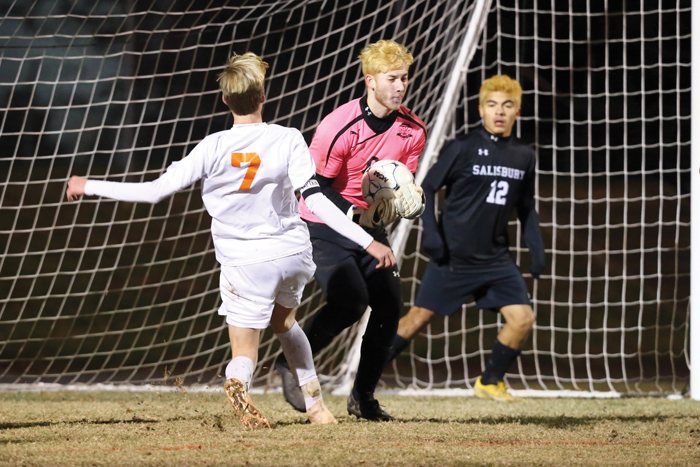 James Sipes file photo/for the Salisbury Post ... Salisbury goalkeeper Josh Faulkner, center, makes a save against East Lincoln’s Chase Gilley’s (7), keeping a state 2A playoff match tied in the second half. Faulkner and Alex Kalogeromitros are the Salisbury Post’s Co-Players of the Year for the All-Rowan County boys soccer team.

SALISBURY — Go ahead, Josh Faulkner. Stand up and take a well-deserved bow.

For back-boning Salisbury’s magic carpet ride into to the 2A state semifinals, the senior goalkeeper has earned a half-share of Rowan County’s Player of the Year honor.

“I never met anybody so dedicated to a cause the way Josh Faulkner was this year,” crowed longtime SHS coach Matt Parrish, again the Coach of the Year. “We had a lot of injuries in the back, more than our share. He was under the gun more times than you ever want your keeper to be, but Josh became ‘that’ guy for us and responded really well.”

Faulkner led Salisbury to the Central Carolina Conference title and a 24-3-1 overall record. He played starring roles in five shutouts — including back-to-back white-washings in post-season play — for a team that enjoyed a two-month unbeaten streak and ground out four survive-and-advance playoff victories.

“I don’t think the expectations were anywhere near that,” said Faulkner, an amicable — if somewhat quirky — sort. “Not many people thought we’d get to that point. But we pushed through a lot of adversity and surprised everyone.”

Including himself. Faulkner played with grand goals, but accomplished them in small ways. He was admittedly less-than-spectacular in a playoff-opening triumph against West Davidson, but rebounded to author shutout wins over Patton and North Davidson. In the fourth round, against machinelike East Lincoln and the high-octane Gilley twins, Faulkner etched his name in Salisbury lore.

“That was my best game,” Faulkner said. “Lots of really good saves and came through in the clutch. East Lincoln had two absolute studs, but we managed to stop them with some tactics that aren’t typically used in soccer.”

And one momentum-boosting save that won’t soon be forgotten. With Salisbury clinging to a precarious 1-0 early in the second half, East Lincoln’s Chase Gilley — a 45-goal scorer — was awarded a penalty kick.

“That was Josh’s moment right there,” said Parrish. “I’ve watched it a thousand times on video. Coming up big in those pressure-packed moments, that’s what defined him this season.”

With a cat-like reflex, Faulkner sprang to his right and deflected Gilley’s low, heavy shot away from danger — creating a frozen-in-time image. “Call me crazy, but that’s what I live for,” he said at the time.

A month later, he reflected on the PK save and his adoration for goaltending.

“A lot of weight falls on my shoulder,” said Faulkner, who returned to SHS in 2017 after playing for an Academy program as a sophomore. “Every once in a while, I can be the deciding factor in a game. And with my ability, more times than not, I’ll be saving your game, not losing it for you. That’s what I’ve always loved to do.”

Faulkner, a member of Salisbury’s 2015 state championship team, knows what winning tastes like. Yet, he believes this marks the end of his competitive soccer career. He’s applied to N.C. State and Appalachian State, but responded half-heartedly when asked about playing collegiately.

“I may try to walk on,” he shrugged. “When I played Academy, I had talks with some pretty good Division I schools, but I don’t know. After playing for (Salisbury) the last two years, nothing will ever be as much fun. The last two years were the best seasons of my life.”

He cited Parrish’s calming, fatherly influence as a chief reason.

“After we lost our semifinal match, Coach talked about handling things that don’t go your way,” said Faulkner. “Sometimes that’s life — and that’s what makes the man. No matter how much we may have wanted it, disappointment happens in life. We wanted to go further, but all we can do is look back and smile about the great things we’ve done.”