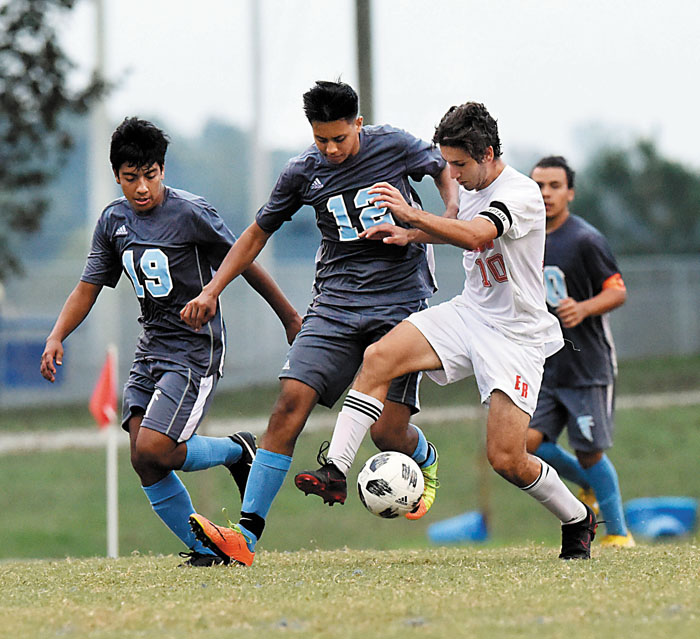 SALISBURY — For two seasons, Alex Kalogeromitros has been the voice of East Rowan boys soccer. This year was his microphone.

The senior forward turned his last waltz around the NPC into a spotlight dance — finishing with 40 goals, seven assists and half of the county’s Player of the Year award.

“I did everything I could this season,” said Kalogeromitros, who scored in each of East’s 23 games. “I tried to make myself and my teammates better, at least as good as we could be. I tried to help the underclasses for seasons to come and establish a winning culture at East. Though our record says weren’t a great team, we grew a lot. We got better.”

East (6-15-2) wasn’t a successful team, finishing last in the conference, but Kalogeromitros shone as a beacon in the darkness. He had a five-goal match in a Sept. 4 win over West Montgomery and added four-goal performances against South Rowan, Albemarle and South Stanly. Everything he touched, it seemed, turned to goals.

“Front to back, he was a leader, plain and simple,” said first-year East coach David Whitaker, a product of Pfeiffer’s revered program. “He brings that extra level you need to win. He always has that good first touch and his vision is great. But his greatest asset  is that he’s so humble. He’s a team-first kind of player.”

In four varsity seasons at East, Kalogeromitros totaled 91 goals in 88 career matches. In 2018, he was second in the state among 3A goal scorers. For that, he credits Whitaker for a well-conceived assist.

“He was open to different ideas,” the easy-going Special K said. “That and he allowed me to play my game. If we saw something on the field, we’d go to him and he’d tweak some things. If I told him the center-backs are man-marking me, he’d drop me back to attacking mid and give me more space to maneuver in. He was good at implementing changes that would help us the rest of the game.”

Spoken like a future coach? Perhaps. For Kalogeromitros — the latest in a family-bred, conga line of front-line wizards — the next logical step is to find a club team with an opening next spring and a college program that fits his checklist before next fall.

“I have no club team right now,” he said. “And I’m still talking to some colleges, both DI and D2. It needs to be the right combination — enough playing time, what college it is, how much can they offer. It’s more than one factor.”

Whitaker’s fondest memory of Kalogeromitros centered around a mid-September match at Albemarle, a middle-of-the-pack 1A school.

“We were losing by two goals and he came over to the sideline and said he wanted a five-minute break,” the coach recalled. “He was standing right next to me and said, ‘Coach, we are going to win this game.’ Then he went to town. He scored three goals in about 15 minutes and we won, 5-4. He has a will like no player I’ve ever seen. It was like putting Tom Brady and the Patriots out there in the last two minutes.”

And much like the understated Brady, Kalogeromitros understands it takes hard work to find success, though there’s no reason to shout it from the rooftops.

“I like being grounded,” he said. “I don’t like gloating over things. If you’re good at something, people will recognize it. There’s no need to go out and push the idea.”

The numbers did that and the clichés wrote themselves.

“I just worked on becoming a better person and better soccer player,” he concluded. “All of it led me to my senior year.”

A year, of course, that was  worth shouting about.