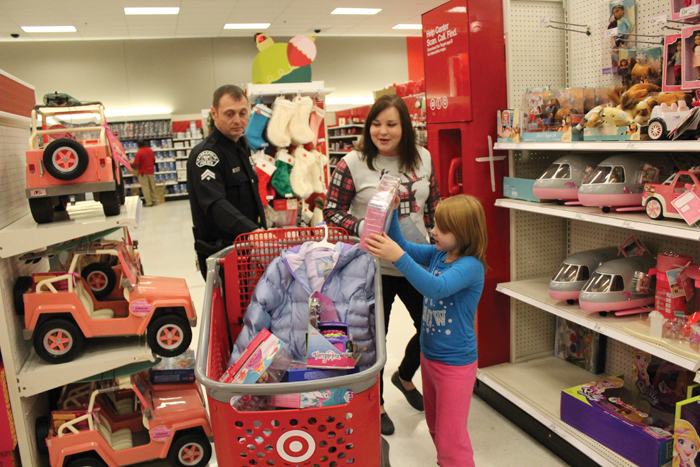 KANNAPOLIS — On its surface, the Thursday morning spectacle painted a dreary picture.

Cold, wet rain pounded down on a long line of police vehicles, all moving at a reverent crawl with lights flashing and sirens sounding. On the opposite side of the street, drivers paused in their midmorning travels for the caravan to pass.

But this was no time for mourning. Rather, each car was filled with smiling faces and excited chatter as members of the Kannapolis Police Department escorted grade schoolers on a Christmas shopping extravaganza known as “Cops Target Kids.”

It’s been a holiday tradition for about eight years, according to Lt. Daniel Wallace. With donations and corporate sponsorships, it provided more than 50 Kannapolis City Schools students with a $400 shopping spree.

Wallace said some $26,000 was raised for the effort this year, with additional donations coming in even as officers walked the aisles of the stores.

“People see this as a righteous cause,” said Wallace. “They want to give to it.”

Wallace said the program is coordinated with Kannapolis City Schools. Counselors identify students most in need of the holiday help.

But it offers more than just hand-selected Christmas gifts for those involved. It offers the chance for police officers to connect with the city’s youngest residents in a positive way.

“A lot of times when we’re involved, it’s in a bad part of these kids’ lives,” said Officer Dale Castor. “Doing this helps them see us in a positive light.”

Danielle said Carly had initially been nervous when chosen for the shopping trip. The 6-year-old first-grader was focused on the most contentious aspects of an officer’s job: arrests and confrontations.

The Conovers said they were able to use the opportunity to explain that officers are “normal” people with their own families and children.

“This will definitely help change her perspective on male officers, too,” said Mike.

Additionally, Danielle said the $400 spree was a big help this holiday season. “Times are tough, so this is a big help. Both of her parents are on disability, so they don’t have much.”

Mike said the caravan of police vehicles tugged on his heart strings, reducing him to tears as he parked and watched it pass.

Though she may have approached her day with trepidation, Carly was quick to warm up with Officer Castor and his wife, Mandy, her chaperones as she roamed the store.

Her favorite score of the day was her Jojo merchandise, she said, particularly a sparkly purple bow she planned to open first.

“I’ve been dreaming all week about shopping with a cop,” she said with excitement.

The Castors said they had been equally anticipating the event.

Mandy, a nurse practitioner, has to have her schedule finalized 90 days in advance. Because of this, she was unable to attend last year.

This year, she said, she made sure she could participate. “It’s our favorite thing to do at Christmas.”

“Sometimes police officers get a bad rap, but they’re truly some of the most kind-hearted people you’ll ever meet,” she said. “All these officers here today, they’re here because they want to be, not because they have to be.”