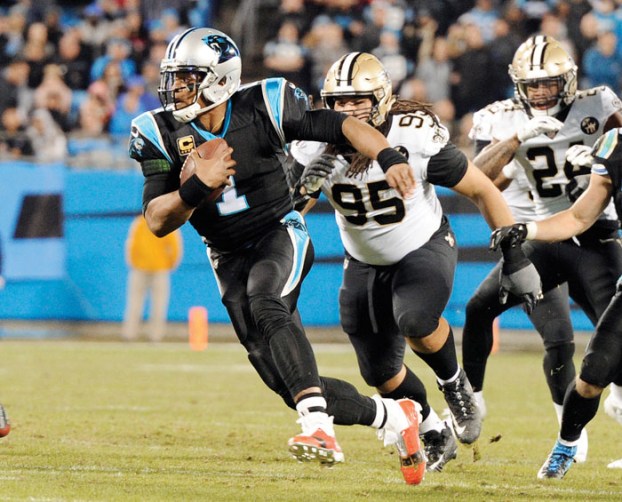 AP Photo/Mike McCarn ... Carolina Panthers’ Cam Newton (1) scrambles past New Orleans Saints’ Tyeler Davison (95) in the first half of Monday night’s NFL game in Charlotte. The Saints won, 12-9. Newton plans to sit out on Sunday due to a sore shoulder. 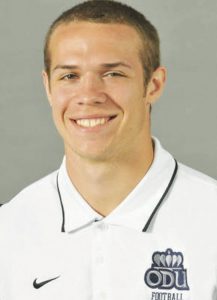 CHARLOTTE (AP) — Cam Newton is headed to the bench with a sore shoulder.

The Panthers made the decision to shut down the 2015 league MVP for at least one game and possibly the remainder of the season due to a lingering right shoulder problem.

Coach Ron Rivera said Taylor Heinicke will make his first career start when Carolina hosts the Falcons on Sunday. Kyle Allen will be Carolina’s backup and Newton will be inactive.

Rivera said he made the decision to sit Newton after meeting with owner David Tepper, general manager Marty Hurney, team doctors and Newton on Wednesday morning before practice.

“It was a good conversation with Cam and he understood our thinking behind this,” Rivera said. “He’s disappointed and he’s frustrated. You know him, he wants to play.”

But Rivera said a “healthy Taylor Heinicke” gives the Panthers the best chance to win this week. He hasn’t made a decision about Newton’s status for Week 17 at New Orleans, saying the focus is on the Falcons.

The Panthers (6-8) have lost six straight games and are all but out of playoff contention as Newton has struggled with an unknown shoulder issue. He had surgery in March of 2017 to repair a partially torn rotator cuff and has had problems ever since.

The Panthers have limited his reps in practice for most of the season and it’s rare when he throws a ball more than 20 yards down the field in a game.

Newton started 14 games and threw for 3,395 yards with 24 touchdowns and 13 interceptions. However, he has just nine TD passes and nine interceptions during Carolina’s six-game skid and has looked uncomfortable in the pocket.

After Newton’s noticeable struggles in a 12-9 loss to the Saints — the eight-year QB was limited to 131 yards passing and struggled throwing the ball with any zip — Rivera pulled the plug on him.

In the past Newton has fought hard to keep the Panthers from sitting him down when he’s battling through injuries.

This time was a little different.

Newton accepted the idea of taking a break and getting the rest without putting up a fight.

“I think that is because of the frustration of it,” Rivera said. “More so than anything else, he knows that once he gets sore, once he gets tired out there. It’s tough for him to do the things that he is capable of.”

Newton was not made available for comment on Wednesday, but discussed how difficult it’s been with not knowing what is wrong with the shoulder after Monday night’s loss to the Saints. He said he doesn’t know if he will need surgery after the season.

Four-time Pro Bowl guard Trai Turner said “in a sense I’m happy that he’s able to get himself together now.”

Running back Christian McCaffrey said Newton has been a “warrior” all season playing through significant pain.

As for Newton’s long-time friend, center Ryan Kalil, he said as difficult as the decision is, it is a smart move for the organization when it comes to the long term.

“He’s still a young guy and he’s got a lot of football left in him,” Kalil said. “I think it is important to get that right, especially at his position. It’s no secret that he has been struggling with it the last month or so. But I feel bad for him. I feel terrible for him.”

Heinicke has been appeared in six games and thrown just five passes since joining the league in 2015 with the Vikings. He’s stepped in to throw a few Hail Mary passes this season for the Panthers because Newton’s shoulder wasn’t strong enough to get the ball down the field.

Wide receiver Jarius Wright said other teams have been able to defend the Panthers differently with Newton at quarterback, knowing he wasn’t going to throw downfield as he’s done in the past.

Wright said defensive backs on other teams have told him “we’re not scared of you guys going deep.”

“They have actually mentioned that multiple times,” Wright said.

Peterman was a fifth-round draft pick by Buffalo in 2017 but was cut by the Bills last month after struggling when given a chance to start.

Peterman threw five interceptions in his first start in 2017 against the Chargers before getting benched. He then won the starting job out of training camp this year but was pulled in the second half of the opener after completing 5 of 18 passes with two interceptions. He started again in Week 9 against Chicago, throwing three more interceptions.

FRISCO, Texas (AP) — Nathan Rourke ran for two touchdowns and threw for another score, leading Ohio to a 27-0... read more