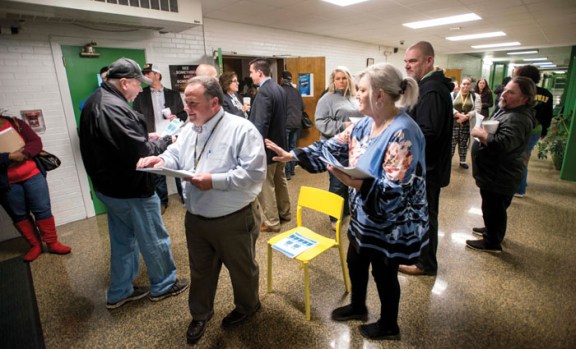 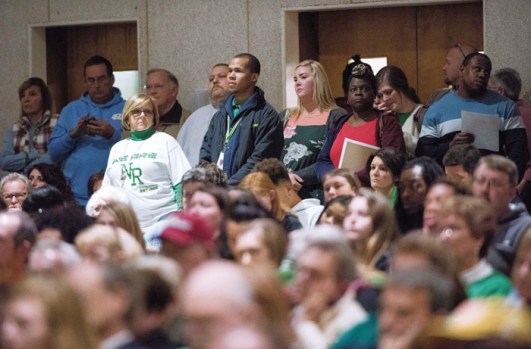 A large crowd turned out at North Rowan High School on Wednesday evening for the last of the school consolidation meetings. Jon C. Lakey/Salisbury Post 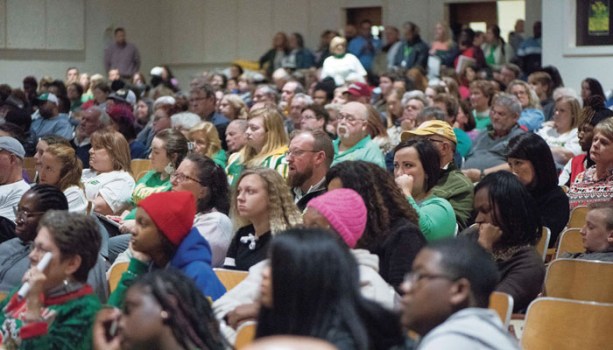 The meeting was the last of six on the consolidation plan. Jon C. Lakey/Salisbury Post 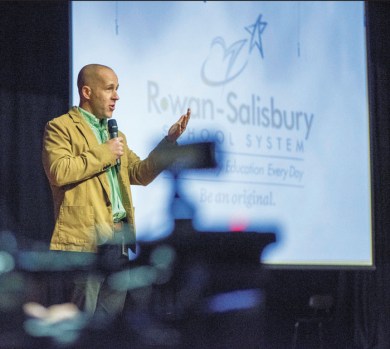 School board member Kevin Jones welcomes the crowd and gives instructions about how the meeting will proceed. Jon C. Lakey/Salisbury Post 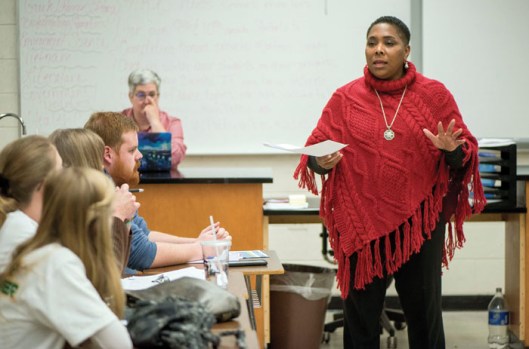 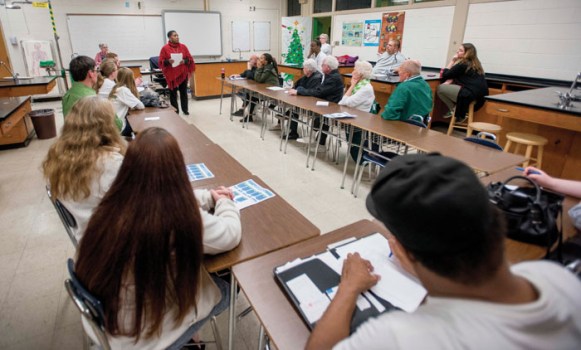 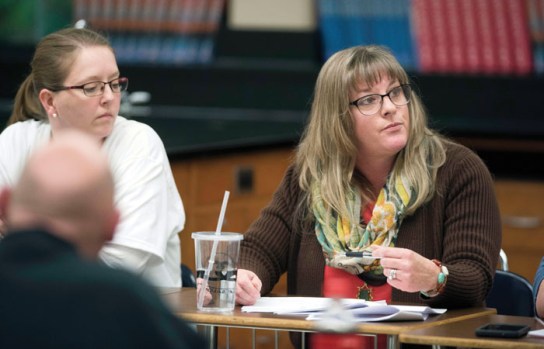 Heather Altizer voices her concerns about the future of students of North Rowan if the school is closed. Jon C. Lakey/Salisbury Post 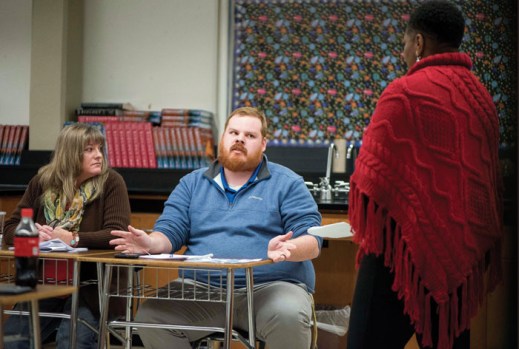 Woody Madison, an alumni of North Rowan High, voices concerns about the future of the school. He is a teacher in vocational high school in Caldwell County. Jon C. Lakey/Salisbury Post 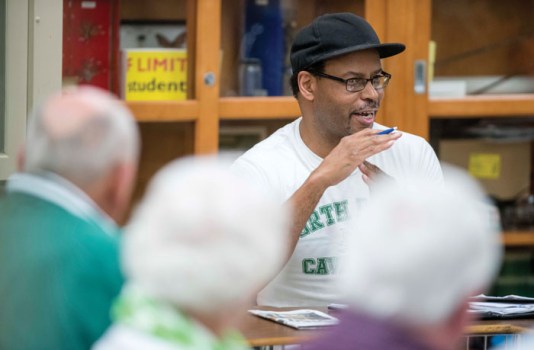 JON C. LAKEY / SALISBURY POST Craig Thomas, and alumni and still lives in the North District, makes comments about closing North Rowan high. A large crowd turned out at North Rowan High school on Wednesday evening for the last of the school consolidation meetings hosted by the Rowan Salisbury School system. According the proposed plan, North Rowan high school is being looked at for demolition and the students reassigned to other schools. Spencer, North Carolina 12/19/18 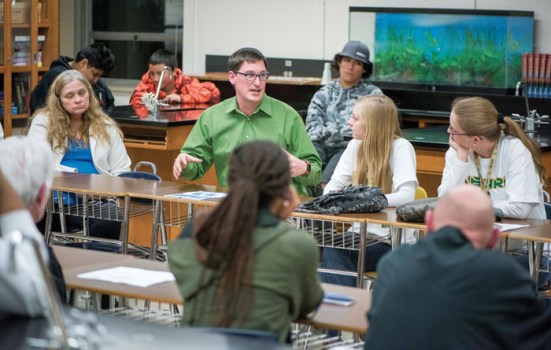 SPENCER — North Rowan residents banded together Wednesday night to fight for the fate of their schools.

For Spencer and East Spencer residents, a proposal to close nearly a dozen local schools — including North Rowan High School — is an attack on their way of life.

Residents flooded into North Rowan High School’s auditorium, decked in green and gold, school letter jackets and other memorabilia. And they came prepared to fight.

When organizers tried to break up the crowd into groups, residents resisted.

“We don’t want to leave!” Randy Gettys stood up and shouted. “We are a family. We are a community. We want to do this together.”

A chorus of shouts echoed in agreement, but after a short back-and-forth, the crowd split up to go to classrooms for small group discussion.

While the classroom sessions were more subdued than the initial gathering, residents had lost none of their passion. They argued that North Rowan should not be tagged as the first high school to close — or carry the cheapest price tag, as it does in the proposal.

The school was chosen because it is an easy target not because it’s in bad condition, many said.

Salisbury High School, they said, is in worse shape and has a comparable number of students. Why not close that school, many asked.

But foremost on their minds were the students of North Rowan. Residents said they doubt that children were first in the school administrators’ minds.

“In that video, students weren’t talked about until nine minutes in,” Woody Madison said.

Heather Altizer said schools are built of bricks and mortar, education and passion.

“What I hear tonight is a lot of bricks and mortar,” Altizer said.

The other pieces, she said, are strangely absent from the discussion.

While students could bounce back easily from a closed elementary school, where culture is not so ingrained, Madison argued, closing a high school is shown to have a negative impact on graduation rates.

What would happen to North Rowan’s students if they were redistricted to other schools?

Older Spencer residents pointed out that one of the reasons the high school is under capacity is because a new wing was added 20 or 30 years ago, when the school system said it was going to redistrict. But the redistricting never happened, and the wing was barely used.

“Somebody in the county needs to stand up and take responsibility,” Diane Everhardt said.

She and others called for the school board to redistrict first, before it even considers closing or consolidating a single school.

Others noted that there is animosity between Salisbury High and North Rowan High. They said the proposed closure is an offshoot of that old rivalry — and of the negative perception many county residents have of the North Rowan area.

“North has been the stepchild,” one resident said. “And the elephant in the room is the race issue.”

A former teacher at North Rowan said that when she taught there, the school lacked many of the classes and opportunities afforded to every other high school in the county.

But the crux of opponents’ arguments was this: Closing North Rowan would be the death of a community and a way of life. It would be robbing the future from hundreds of students who have no other option.

Wendy Bringle, a North Rowan High graduate, teared up as she talked about what the school meant to students.

“I could not imagine in my life not having to graduate from this school, having to leave midterm. … This place, it’s everything,” Bringle said.

Kevin Leichman pointed out that many students involved in sports and extracurricular activities lack transportation. In the small, close-knit community of North Rowan, they can walk home. Sports means scholarships, college and a future, he said. If the school is closed, many may be forced to drop out of sports.

“This is their home and their chance at college,” Leichman said.

Again and again, he and other residents called for redistricting first.

While the Rowan-Salisbury Board of Education plans to review a summary from each meeting on the consolidation plan, one resident said there are some things reports can’t capture.

An online survey is available for those who could not attend an input session at ednc.org/RSS. The survey is open through Friday.

Rowan County residents can view an informational video at: https://www.youtube.com/watch?v=PG3VvkEg1go&feature=youtu.be Questions, concerns and ideas can be submitted to consolidation@rss.k12.nc.us.