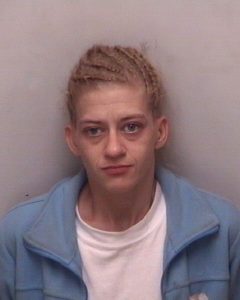 SALISBURY — Salisbury police say a local woman tried to rob an Innes Street gas station but left when the clerk refused to give her money.

Officers responded to a holdup alarm about 8:30 p.m. Wednesday at the Pop Shoppe, 1831 W. Innes St. According to the clerk, a white woman wearing a white T-shirt, blue jacket, purple pants, and black shoes demanded money.

The clerk didn’t give her any money, according to police officials.

The woman, later identified as April Harris, walked out of the store and got into a waiting vehicle. Police were given the license plate number and a description of the vehicle. It was located in the 100 block of Andrews Street in East Spencer.

Harris was the passenger in that vehicle and was wearing clothes that matched the clerk’s description and surveillance video.

Police are still looking for Jones.

Anyone with information on the whereabouts of Jones is asked to contact the Salisbury Police Deparatment at 704-638-5333 or Salisbury-Rowan CrimeStoppers at 866-639-5245.

CONCORD – The Concord Police Department strongly encourages motorists to prepare for traffic congestion this weekend in the I-85 exit... read more