‘I just want to teach,’ says Teacher of the Year Zach Overcash 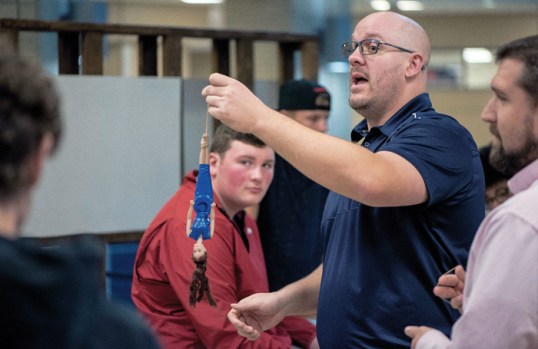 Zach Overcash uses a Barbie doll and rubber bands to figure out how to allow the doll to bungee jump without striking the floor. Jon C. Lakey/Salisbury Post 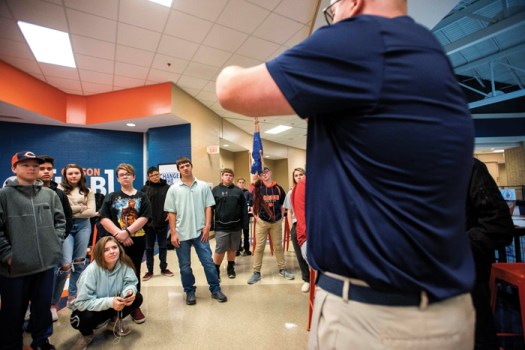 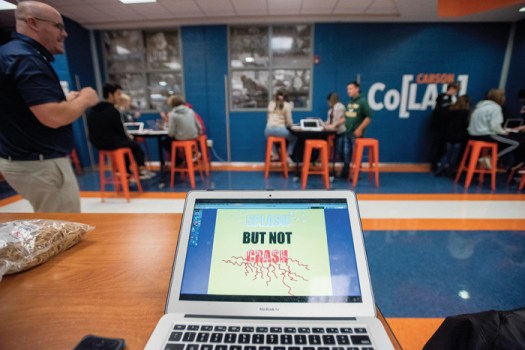 He played on the offensive line in high school football, and today many of his thoughts on teaching center on football.

“It takes a special person to play offense,” Overcash says, lounging against a tall bistro table in the halls at Carson. “You’re never gonna hear their names called on Friday night. There’s a lesson in that. I enjoy it. There’s not another sport that has a similar position, the selfless part of it.

“It’s a lesson kids can learn, being a cog in the wheel and not getting the glory.”

Overcash teaches freshman math. He says lots of his students didn’t get a great math base in early grades for a number of reasons. Some students had substitute math teachers for a whole year, and some for multiple years.

Some kids had elementary teachers who just did not love math. He sees it as his job to help the students love math a little more.

His most recent project was called “Splash But Not Crash.” Small teams of students were given a Barbie doll and a box of rubber bands – all sorts of rubber bands: thin, thick, short, long.

The students’ assignment was to calculate how long to make a bungee for Barbie to dive over the stair rail and dip her ponytail into a bowl of water.

“You don’t want to break her neck,” he explains. “You’re dealing with Barbie, her hair, and the rubber bands. Any questions abut seeing the scatter plot? Do you notice anything on this scatter plot?

“If you don’t have your notes out from yesterday, I highly recommend you get them out,” he tells the students. “M*1+B and BOOM! There’s my model. How do you know it’s a straight line? If r=1, that’s a perfect line.”

The students mark points on a scatter plot and, through trial and error, splash their Barbies.

Overcash stuck duct tape on each Barbie in the rough approximation of an evening gown because, “Well, boys will be boys.” With the duct tape, there’s nothing to undress, no jokes to make.

Students work together diligently and, everyone’s on task. They’re having fun, too.

“On Monday, they may come in and think they’re going to learn about systems, then I break out the beat and they pull out their phones. They’ll know that rap four years later when they’re seniors,” he says. “I had kids write a rap about slope one time. Music can transform the learning experience. They get excited. They’re learning vocabulary, math concepts and lyrics to a song.”

Music is in Overcash’ blood. His mom, Sandy Overcash, owns Center Stage Dance Company, and Zach sort of grew up in dance.

Teaching is in his blood, too. His mom taught in public schools for many years, and his grandparents both were teachers.

“I always knew I wanted to be a teacher. My grandfather, Harold Higgins, was a coach and history teacher. Lots of people in my department have education degrees with math, but I have a BS in math education. I have the same degree as my mentor, Mr. Dwayne Fink, my high school math teacher.”

“When I took the teaching class, there was no doubt,” he says.

As he prepared to graduate in 2007, Principal Kelly Withers emailed him and asked him to come interview.

His second-period class recently worked to build “something awesome.” Small groups decided what to build: a derby car, a luxury doghouse, a catapult.

“They spent a couple of days on the whiteboards sketching their ideas. Some groups didn’t agree, and they had to present the pros and cons to each other. They have to provide a step-by-step documentary from planning to design to creating.

“The kids are invested — they are learning lessons outside of XYZ – learning how to work together, how to deal with issues that aren’t planned. Most adults learn these lessons. This shows a lot about their character. When it messes up, do they fold up shop and say it’s over, or do they recalibrate? That’s one of our goals as a school.”

Winning Teacher of the Year is an honor for him, but he stays down-to-earth about it. The day the award was announced, he was presented the use of a Jeep Compass from Gerry Wood for a year.

As soon as he picked up the car, he went to have lunch with his grandparents.  They have been in and out of the hospital a lot in the last year, and he knew they’d be proud. They were.

“This is one of the hardest jobs you can have. Yes, I was taught how to teach, but until you’re in the classroom, you have no idea of the issues that can arise. You spend two hours planning a lesson and the whole thing can go awry because of a situation.

“I’m not the best teacher in our building; there are awesome things happening throughout our school. I’m not the best. I try; I try really hard. That’s what kids see. They see through the cracks. They’ll give you their honest opinion.

“I don’t want my name called. I’m just being an offensive lineman. It’s about sharing what we do. I think now maybe people will listen if I speak in meetings, they may value my opinion, but I think they valued my opinion before.