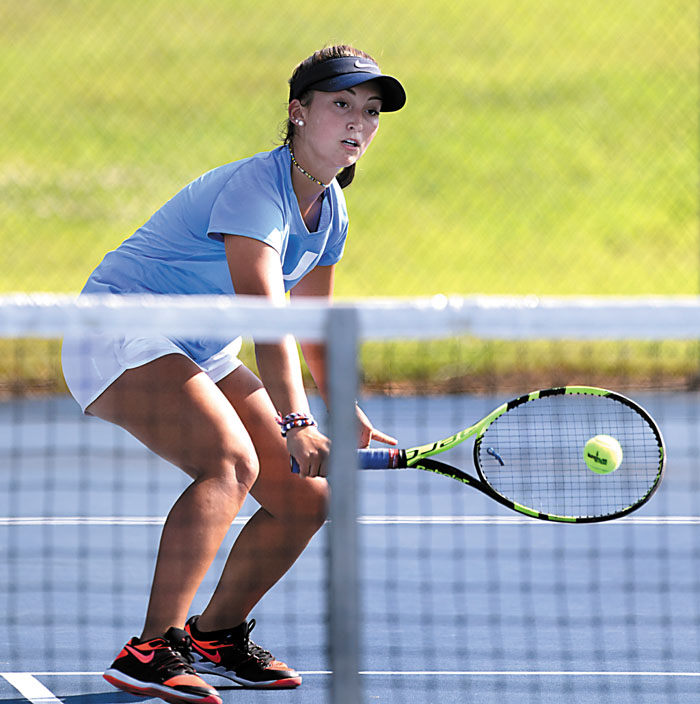 Wayne Hinshaw file photo/for the Salisbury Post ... West Rowan’s Payton Holt is The Salisbury Post’s Player of the Year in girls tennis. Holt led the Falcons to the NPC title, going 25-4 individually at No. 1 singles.

“It’s cool and I like it, but what I’m super excited about is having so many teammates on the all-county team,” Holt said. “When I was a sophomore, I had one teammate make it (Mackenzie Koontz), but I was the only one from West my freshman and junior years. To have four all-county teammates means a lot. That happens when you win the conference.”

When Holt was a freshman in the fall of 2015, she was exceptional right away. Salisbury’s Kayla Honeycutt, the 2014 2A singles champ, was in the second year of back-to-back county player of the year awards that season, but Holt was quietly getting a special streak under way. In four years as West’s No. 1 singles player, she never lost to a Rowan opponent.

As a senior, she was undefeated in the regular season and finished 25-4. Leading West (15-2) to its first ever conference championship with a 9-1 record, Holt was the North Piedmont Conference singles champion and player of the year for the second straight year. She also was the singles champion in the inaugural Rowan County Tournament that was attended by four schools.

“Winning the conference for the first time and seeing my team win several very tough conference matches was the best part of the season,” Holt said.

In her career, Holt won 73 matches as West’s No. 1 seed. In four seasons, with the first two spent in the very competitive South Piedmont Conference with the Cabarrus schools, she won 36 of 38 league matches.

She played doubles with three different partners during her career (Koontz, Abby Johnson and Lacy Waggoner) and was 42-6 in regular-season matches.

“She just hardly ever lost,” West coach John Brown said. “She was a great leader for a young team this year and the best player I’ve ever coached. I figure I’ve got 10 more years of coaching girls tennis and unless I get really, really lucky she’ll be the best one that I ever get to coach. She has a lot of ability and the very best ones have the drive to match that ability. She’s got that drive to be great.”

Holt’s success extended beyond the county and the conference. She was a qualifier for the 3A state individual tournament as a freshman, sophomore and senior.

“We are in, by far, the toughest region in 3A, so to qualify for the state tournament again this year was satisfying,” Holt said.

Brown said Holt won two ferocious matches to advance to the regional semifinals and qualify for the state event.

“She beat tough girls who were crushing the ball, who hit even harder than she does,” Brown said. “But when the toughest matches came around, she was always up to the challenge. She might get nervous, but she was never afraid of anybody.”

Holt, who is an outstanding student, hasn’t made a college decision yet. She said her most likely destinations are Tusculum or Southern Wesleyan. She plans to play college tennis and wants to become a physical therapist.