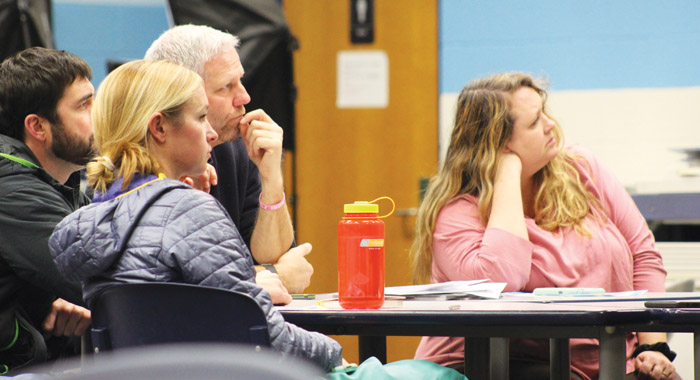 People watch a presentation explaining a proposal that calls for the closure and consolidation of more than 10 Rowan County schools Tuesday at West Rowan High School. Rebecca Rider/for the Salisbury Post

Only about two dozen people made it to the meeting, which was held Tuesday night at West Rowan High School.

The small turnout made the meeting different from previous sessions in several ways. For one, the crowd stayed together and discussed the proposal in the media center, instead of breaking into smaller discussion groups.

The gathering was also quiet, with moderator Travis Allen, a Rowan-Salisbury Board of Education member, having to coax participants into asking questions more than once.

That could have something to do with the relatively small impact the proposal — which calls for the closure and consolidation of more than 10 schools — would have on the West Rowan community. Schools in West Rowan aren’t even named in the proposal until the third phase, which would be more than 20 years out.

And for those schools that are mentioned, the plan lacks any specifics.

But West Rowan is no stranger to consolidation and closure. While other schools in Rowan County enjoy Christmas break, teachers in the western area will be hard at work moving into the new West Rowan Elementary — a school that will consolidate Woodleaf and Cleveland elementaries.

The move means that many in West Rowan are more concerned about redistricting than they are with consolidation.

Those present at Tuesday’s meeting wanted to know when redistricting would occur — before schools close or after?

They also wanted to know if any Rowan-Salisbury Schools are currently at capacity or if redistricting would push any school to capacity or over capacity. That is not likely, Allen responded.

“Redistricting our students doesn’t fill our empty seats,” he said. “It just moves them other places.”

The group was also concerned with capital. Where would the money for the proposal, which totals several hundred million dollars, come from?

If closing schools generated a savings of roughly $500,000 per school, would the West Rowan community see any of that money used to shore up its schools?

While not in as desperate need of repair and updates as schools in some areas, West Rowan schools could still use improvements.

Allen said he could see that money being used for repairs, minor updates and replacements. But if it doesn’t come, “At least we have air conditioning in our gym now,” he joked.

Others were curious about how the proposed vocational high school would function — a question that’s been echoed at every community input session so far.

While the meeting was brief, Allen encouraged residents to send in their thoughts, ideas and concerns. Nothing has been decided, he reminded those in attendance, and it’s “a very fluid conversation.”

“(Your thoughts) do matter,” he said. “Because this thing has not been fleshed out.”

The final community input session will be held from 5:30 to 6:30 p.m. today at North Rowan High School.

An online survey is available for those who can’t attend the input sessions at ednc.org/RSS. The survey is open through Friday.

Rowan County residents can view an informational video at: https://www.youtube.com/watch?v=PG3VvkEg1go&feature=youtu.be

Questions, concerns and ideas can be submitted to consolidation@rss.k12.nc.us.