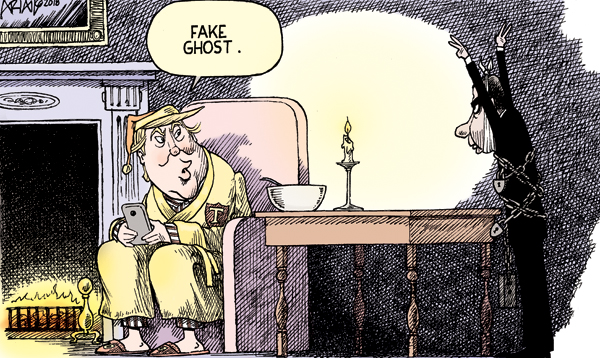 This time last year, the Trump Administration and Republicans in Congress were racing to stretch ribbon and wrapping paper around a $2 trillion gift to big corporations and rich investment bankers, the optimistically named Tax Cuts and Jobs Act. With a years’ worth of evidence now in, two things are indisputably clear.

First, the law has miserably failed to deliver the promised economic boost.

Second, a lot of Americans know that most of us got a raw deal.

The Trump tax cuts were always based on a long con, the repeatedly debunked theory that lavishing tax cuts on rich investment bankers and wealthy corporations would trickle down and benefit the rest of us. Its never worked before, and this time around has been no exception.

The Trump tax cuts failed to supercharge the economy nationally, but the story here in North Carolina — where job growth faltered dramatically — is even more damning.

From October of 2017 through October of this year, job growth slowed to roughly half the pace set over the previous two years, and that’s compared to a rate of growth that was already historically meager for this stage of an economic expansion. The bill also failed to address the lack of middle-income jobs in the current economy, with North Carolina faring even worse than many of our neighbors in the southeast.

The results have been worse still for many rural and small towns in North Carolina. Job growth in recent years has been heavily concentrated in a handful of North Carolina’s larger cities, and that imbalance has only deepened. Over the last year, more than 90 percent of the net job gains have happened in the Raleigh, Charlotte, Winston-Salem, Asheville, and Durham areas.

At the same time that jobs were concentrating in a few cities, roughly half of North Carolina’s counties are actually losing jobs. Even in the midst of the longest economic growth period in decades, many of North Carolina’s most distressed communities have seen jobs disappear after the Trump tax cuts took effect.

While most North Carolinians have seen little or no benefit from the 2017 tax cuts, corporate America and their wealthy shareholders are rolling in newfound wealth. Fifteen of the biggest Fortune 500 companies kept $1.5 billion in avoided taxes each, while the majority of the wealth involved in the Trump tax cuts have funneled into the pockets of rich shareholders.

All of this brings us to the second thing that is abundantly clear as the Trump tax cuts turn one year old: The law remains unpopular with Americans who are sick of seeing policy that enriches the rich while leaving everyone else out to dry.

The tax cuts were never popular, but 2018 has seen a steady stream of polls showing that a majority of Americans are either neutral or opposed, and most have seen little or no impact on their families’ finances. In spite of advertising blitzes and hand-waving by its proponents, the Trump tax cuts simply have never caught on with most Americans.

Instead of becoming an accomplishment that they could hang their hats on, the tax cuts have become a millstone hanging from the necks of the politicians who passed it. The tax cut legislation is one of the only large policy changes that Republicans in Congress have to show for two years of united conservative control, and American voters were clearly unimpressed as they snatched the Speaker’s gavel away from the House leaders who had passed the law.

Unfortunately, the real toll of the Trump tax cuts has yet to come due. The cuts sent the federal government further into the red, and many lawmakers are already talking about the need to slash programs that help working Americans keep roofs over their heads, get healthcare, and put food on the table.

That’s the legacy of Trump’s biggest con, a massive windfall for his rich friends, scraps for everyone else, and more debt undermining our ability to provide basic public services.

If 2018 was a cautionary tale about giving tax breaks to billionaires, let’s hope that 2019 sees the start of a new chapter. It’s time to confront the real economic problems we face, and to renew a social contract that asks those who have profited the most from the American experiment to reinvest in our shared future.

Patrick McHugh is senior public policy analyst at the Budget & Tax Center of the N.C. Justice Center in Raleigh.