After 10-day layoff, Duke wakes up in 2nd half, crushes Princeton 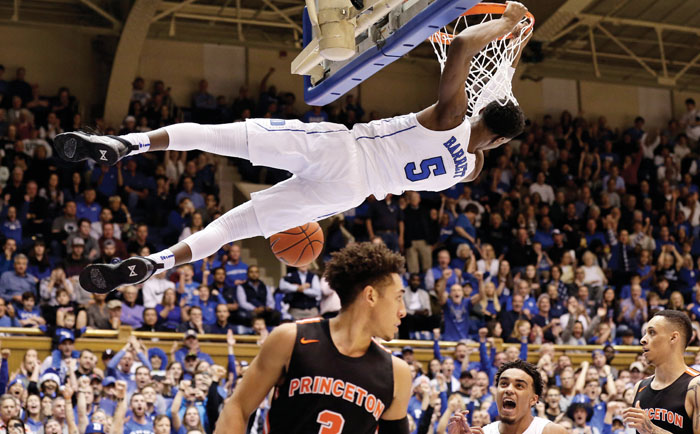 DURHAM (AP) — A cold offensive start for second-ranked Duke on Tuesday night turned out to be a good sign for coach Mike Krzyzewski. That’s because his Blue Devils never let all those missed shots infect the team’s defensive focus.

RJ Barrett continued his rookie-season scoring rush, finishing with 27 points to help second-ranked Duke beat Princeton 101-50. Meanwhile, as the offense got rolling to hand Princeton its most lopsided loss in its program history, the defense finished with a bevy of steals, blocks and deflections to earn the approval of the Hall of Fame coach.

“We kept telling them: ‘Just don’t be down about the offense, you’re doing a good job, just keep shooting, keep doing it and don’t let it affect the defense,’” Krzyzewski said.

Consider it a lesson learned and applied for the freshman-led Blue Devils (10-1), whose high-flying offense has the potential to run past just about anybody. Yet this group has shown the ability to be a get-after-’em defensive team, too, with freshman point guard Tre Jones pressuring the ball surrounded by plenty of length and athleticism on the wings.

Krzyzewski wants his players to focus on the latter, knowing it’s likely a matter of time before any off-target shooting corrects itself. And that was obvious Tuesday as Duke opened its first game in more than a week due to an exam break by missing its first eight shots and falling behind 8-0.

Even more unusual of a sight on its famously hostile home court, the Blue Devils didn’t take their first lead until more than 14 minutes in.

“We were getting good shots,” Barrett said. “We just couldn’t make them.”

But after a steady start from the Tigers — who caught Duke with some early backdoor cuts — the Blue Devils scored on 10-of-11 possessions to close the first half, then on four more out of the break to take a 48-28 lead. Duke shot 64 percent after halftime as the game turned into a rout.

Princeton: Those opening few minutes had to be encouraging for the Tigers. They just didn’t have an answer once Duke’s shots started falling to pair with that defensive aggression.

“They got so many deflections, just stuff we hadn’t seen before,” Henderson said. “It’s a great lesson, that when you’re playing against the best, you have to be absolutely sharper than you’ve ever been.”

Duke: The Blue Devils hadn’t played since beating Yale here on Dec. 8, and it took a while for the offense to get into gear. Things went to script once that happened. Barrett came in averaging an Atlantic Coast Conference-best 24.2 points and finished 11 of 21 from the field while fellow rookie Zion Williamson (17 points, 10 rebounds) had another big game. Meanwhile, Duke’s defense had 12 steals, 14 blocks and 23 points off turnovers to go with a 50-25 rebounding advantage.

Duke quickly did a better job of closing off those backdoor lanes after Princeton got loose inside for easy early layups.

“Really that was just something we hadn’t worked on as much coming in,” said Duke forward Javin DeLaurier, who had six points and three rebounds. “Once we realized that was something they were going to try and hurt us with, guys did a good job of just making the adjustment, not contesting as much. And as soon as a guy was dribbling at you, expect the back door.”