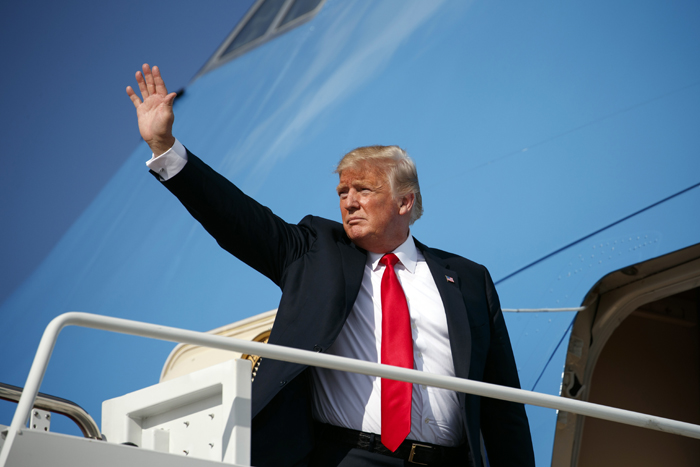 President Donald Trump waves as he boards Air Force One to travel to a campaign rally in Evansville, Ind., Thursday. Evan Vucci/Associated Press

President Trump really dislikes the 2015 Clean Water Rule. Barely a month after taking office he directed the Environmental Protection Agency to take steps toward killing it. The “horrible, horrible” rule, he said, was a “massive power grab” that burdens farmers and developers with restrictions on “every puddle” and “every ditch.”

In fact, the rule simply clarifies the scope of the 1972 Clean Water Act, while going out of its way to avoid impinging on ordinary farming operations. The administration’s proposed replacement shows that its real aim isn’t to sweep away petty and pointless regulations, but to broadly curtail federal authority over water pollution. Trump’s new rule would undermine protections that have been in place for almost half a century. It threatens the quality of drinking water and aquatic habitats across the U.S.

The administration proposes to redefine “waters of the United States” for the purposes of the Clean Water Act. These have long been assumed to include not only navigable rivers and lakes but also the streams, ponds, marshes and wetlands connected to them. This stands to reason, because water flows from place to place, carrying any pollution along with it.

However, the extent of federal control over water has been a matter of dispute. In 2001 and 2006, the Supreme Court said the law applies to smaller bodies of water that have a “significant nexus” to larger ones. An effort by the Obama EPA to clarify matters resulted in the Clean Water Rule. It covers streams and tributaries that flow only seasonally or after rains, wetlands that have no surface connection to rivers, and intermittent ponds such as prairie potholes and vernal pools. The rule expanded the Clean Water Act’s jurisdiction by about 3 percent.

The Trump administration’s proposed replacement would radically dial this back by excluding so-called ephemeral streams that are fed only by rainfall or snowfall (about 18 percent of streams nationwide, and more than a third of those in the arid west) as well as wetlands with no surface connection to included waterways (more than half of total U.S. wetlands).

This wouldn’t just cancel the changes introduced by the Obama rule in 2015. Back then, many waters were subject to regulation on a case-by-case basis: The Trump rule would categorically deny protection to them, leaving their fate to the states.

Supporters say this is a virtue: States are better able to judge which waters should stay clean. But as with other areas of environmental protection – including greenhouse-gas limits and endangered-species conservation – states vary widely in their ability and willingness to act. California has stringent rules safeguarding its lakes and streams; many other states do not.

And because water, like air, is a shared resource, pollution in lightly regulated states would spread to neighboring waters.

That’s not all. One key provision of the Clean Water Act enables citizens to bring lawsuits when their states fail to deal with water pollution. Such legal actions have led, for example, to the clean-up of Boston Harbor and the Chattahoochee River in Georgia. By ending protection for specific waters, the Trump rule would limit citizens’ ability to bring suit.

The Clean Water Act has drastically reduced pollution in the United States. Reversing that progress is deeply misguided. If the rule goes ahead as expected after the 60-day comment period, environmental groups will try to tie it up in court. Congress could push back more effectively with legislation to restore a sufficiently broad definition of “waters.” One way or another, the Trump rule should be blocked.