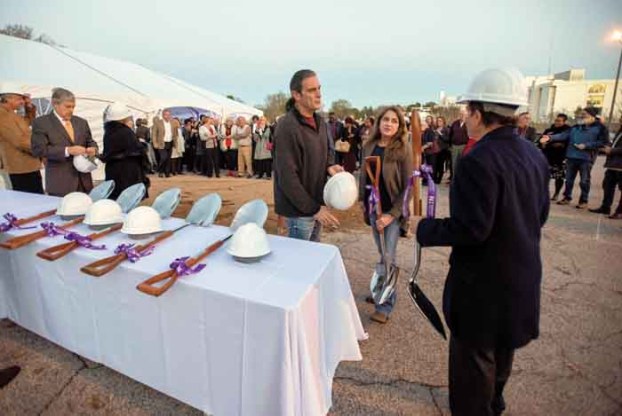 Bobby Miller and his sister Sharon Earnhardt speak with Lee Wallace before the groundbreaking for the Wallace Cancer Center during the Rowan County Chamber of Commerce's Business After Hours on Monday evening at Mahaley and Mocksville avenues. Jon C. Lakey/Salisbury Post

On Monday night, as part of Business After Hours, hospital leaders spoke about the new cancer center that will allow four community cancer centers to be in one building.

“We’ve had cancer care in this community,” said Dari Caldwell, president of Novant Health Rowan Medical Center. “We just haven’t had it all under one roof. And what we’re creating here is for the convenience of our patients, and we are so delighted to have the participation and cooperation.”

Dr. William Brinkley of Carolina Oncology Associates spoke about the improvements the cancer center will bring to the community.

“It will allow us to take care of patients all under one roof,” Brinkley said. “It will also give us the space, technology and supportive resources we need to continue to provide the quality of care that is expected. Oncology is an ever-evolving, rapidly changing field. We need the support, services and resources to be able to provide that care.”

Rick Parker, director of Rowan Medical Center Foundation, said the cancer center is a promise he made to the late Tippie Miller, a foundation supporter who died of cancer in 2017.

“Tippie Miller on her death bed grabbed my hand and pulled me down to her bed,” Parker said. “She said, ‘Promise me you’ll build this thing.’ She knew how much I hate that word promise, because I promised my daughter at 14 something — and I’ve forgotten what it was — and she rode my you know what until I did it. So you can ask my wife. I never used that word ever until Tippie came along.

“As we go forward tonight, as we go through the season, as we build this cancer center, … think about Tippie and that drive that she had to make sure we did this. And we’re going to do this thing, guys.”

The center will be named for Salisbury residents Lee and Mona Lisa Wallace, who made the lead gift for the $24 million, 30,000-square-foot facility.

Tracy Smith, co-chairwoman of the capital campaign committee, said that as she has spoken to people affected by cancer, they have agreed on the need for a cancer center.

“Families who have shared with us their cancer stories and journeys, whether it is them who have been affected or a family member, they tell us and they’re very honest in saying, ‘We want something different than what we experienced in another place,'” Smith said. “They’re holding us to help our future patients. We have heard more stories of hope. We’ve cried with people. It’s just been a true blessing that we’ve been able to embark on this campaign and touch so many people.”

Mayor Al Heggins said her mother had cancer and passed away in 2011. She said having the cancer center will allow patients and families to feel like their care is more personalized.

“I’m so proud and so pleased we’re going to have our own cancer center here in Salisbury,” Heggins said. “Just like Greg (Edds, a county commissioner) said, it is a symbol of hope. It is also a symbol of love.”

Parker said construction will begin in May and the Wallace Cancer Center will open in the summer of 2020.

SALISBURY — I hadn’t heard from Doug Black since September, and I feared the worst. Doug had been battling a... read more